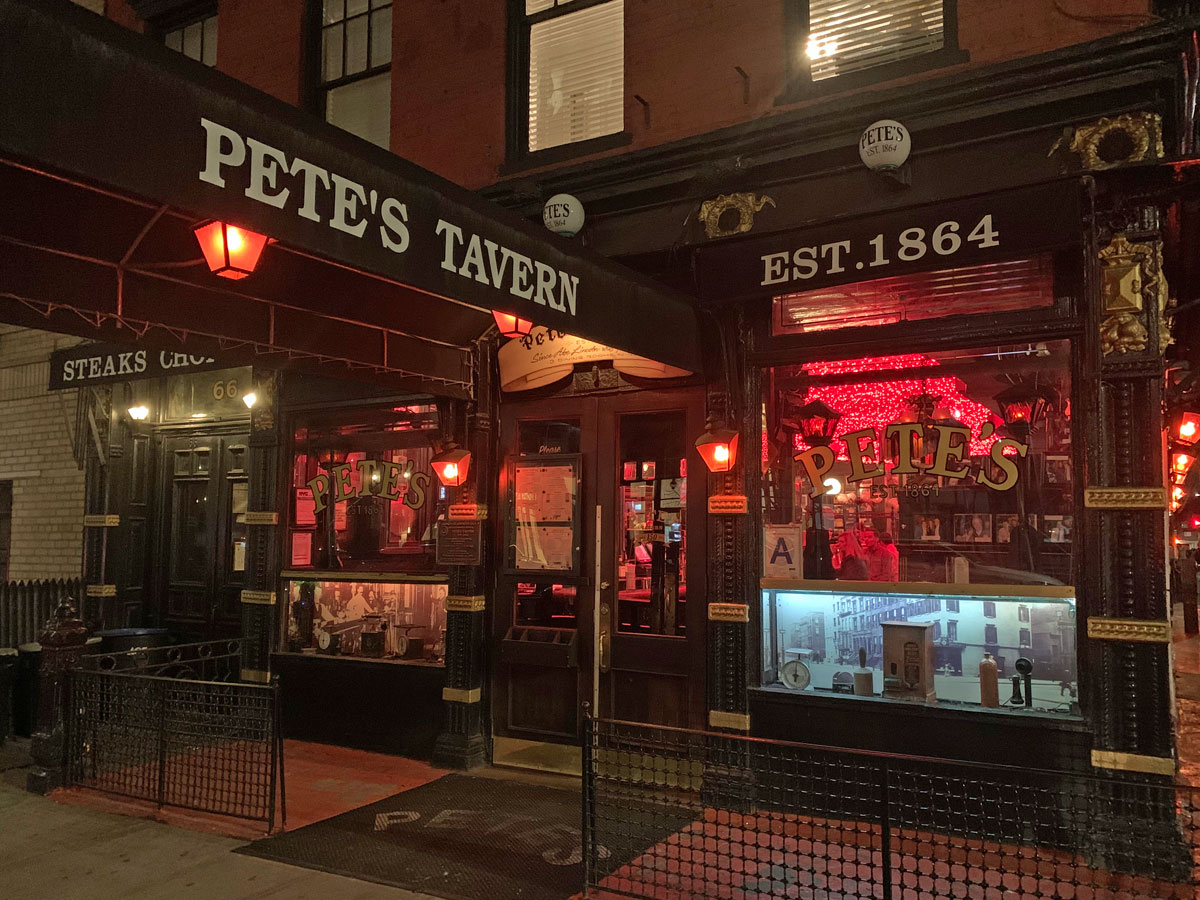 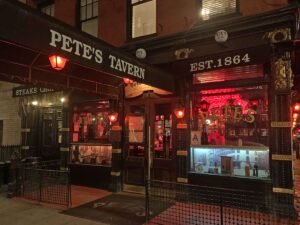 Pete’s Tavern came into being when Abraham Lincoln was president. In the midst of The Civil War. I’m honestly trying to imagine someone way back then thinking “Yeah, man, we still have those bone saws and people are dying by the thousands in a war a few hundred miles away, but let’s open a bar!” I suppose people needed something to take their minds off of the horribleness that was 1864. Seriously, can you just imagine how bad the city smelled back then? Worse, even, than it smells right now? How anybody had an appetite is a mystery to me.

Of course the bar itself wasn’t renamed to Pete’s Tavern until 1926 or so. Calvin Coolidge was president then. He was no Lincoln. Prior to that the author O. Henry hung out here and included its previous incarnation in one or more of his stories. That’s apparently enough for some. To me O. Henry (Oh Henry!) is a candy bar, but I’m only semi-literate.

So, the tavern itself is exactly what you’d expect out of a super-old establishment. Pressed tin ceilings, lots of wood and tons of shit all over everything. You know, so much shit that the whole joint ends up feeling like some sort schizophrenic diorama. Glass cabinets filled with brandy or cognac or some such stuff. Those old-school black and white tile floors, white table cloths and pub chairs. It all screams drink a beer, eat a burger and maybe some fries fresh out some grease from 2003.

But, weirdly, Pete’s is technically an Italian restaurant. It’s discordant to say the least. And, honestly, a little disappointing. What’s also disappointing is charging $18.25 for a cheeseburger. And this ain’t no Minetta Tavern black label burger. This is a more stilted, not even close to as good version of the pub-bred Peter McManus burger. Which you can get there for a cool $12.75. It was fine, honestly, but is clearly not their focus. That would be the linguini, I guess. I think I also got some fried pickles, but looking now at their menu perhaps they were actually fried zucchini. But maybe not. I’m not sure.

So where do we come down on Pete’s? Well, it’s in a decent location, kind of sitting in the center of several neighborhoods your cousins from out of town might want to visit. That central location and its historical fit and finish may provide enough intrigue to draw you in. But I would suggest maybe sitting at the bar for a nice brew, but skip sitting down for a meal. There are just way better and cheaper options out there. But few with as much age to ’em, I suppose.