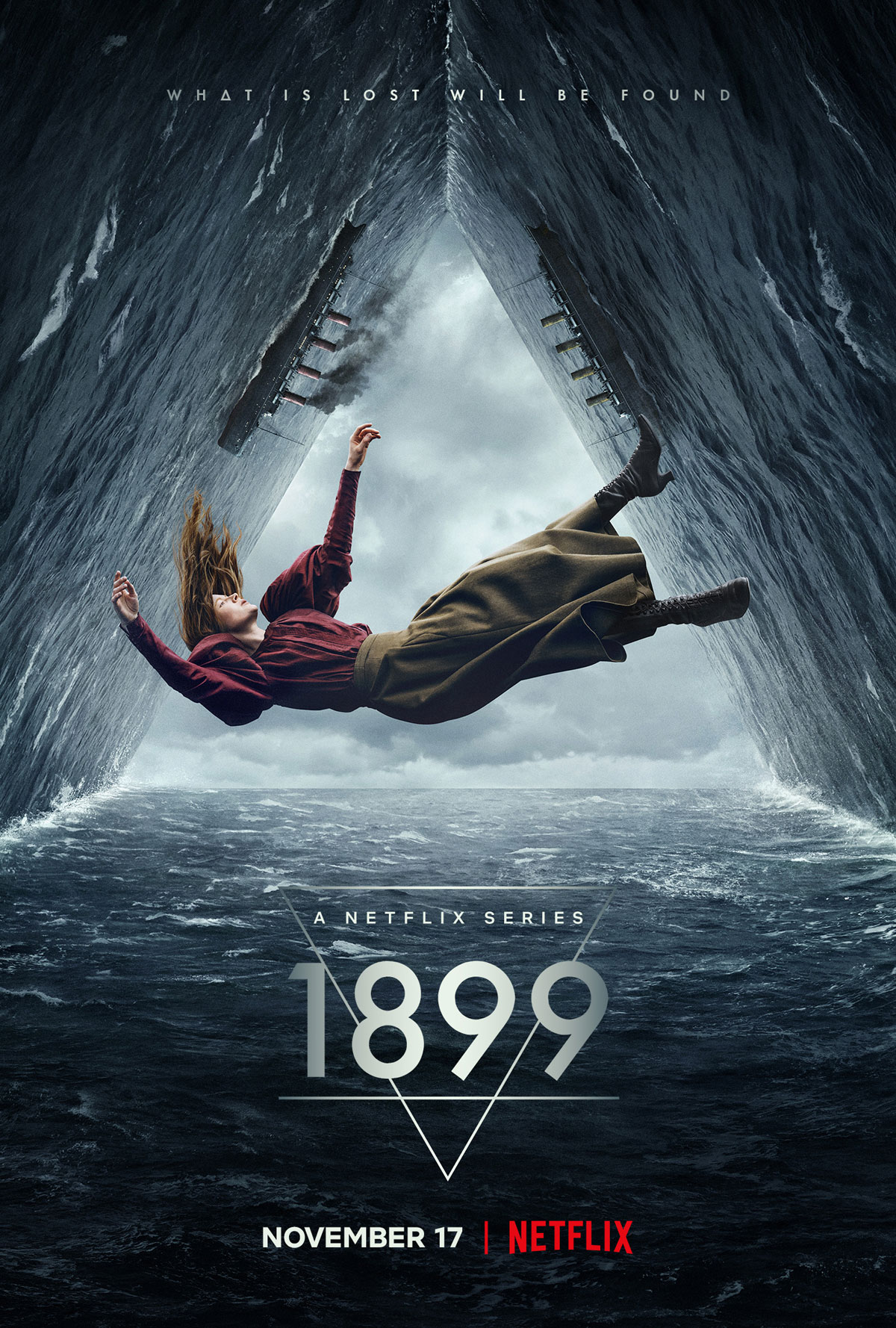 If you made it through three seasons of Dark, you’ll understand what you’re in for with 1899. The look and feel of it is very similar. The pacing and just utter weirdness of it will feel familiar. The surreal dread. The odd, almost steam punk version of technology. The mixture of symbology and off-kilter science fiction that fits no other box you’ve seen on another show. The intricate set designs and mysterious characters with smudged faces. As if nobody in any world has ever heard of a shower. Literally, everyone is always kind of sweaty/greasy and dirty. It’s a look. And it’s one that 1899 uses to great effect as we try to unravel what the absolute hell is going on on this steamer ship in — you guessed it — 1899.

The first thing you have to know about this series is that you have to be prepared to read. It’s not an all-German production like Dark, but certainly has its share of German. I’d say that it’s English-based, but this steamer ship from the UK to NYC is filled with people from all over the old European continent. All in we get a cast that speaks the following languages (that I can discern): English, German, Spanish, Portuguese, French, Polish, Chinese (disguised as Japanese) and Danish. So we have this whole Tower of Babel thing where characters stand in scenes together with no idea what the other is saying. As the audience, we get subtitles, which is nice, but I imagine working this out in the script must have been a real chore. Certain characters can understand each other, but not others. So information is always fragmented depending on who can actually communicate with whom. It’s a cool setup that really keeps you on your toes as a viewer. But, again, it’s not a show you can watch while multitasking.

Much like Dark, it’s a bit hard to explain what the hell is going on in 1899 in any kind of clear prose. There’s probably a math formula of some sort that sums it up better, but I was never good at math and don’t plan on learning now. So I’ll try a quick summary. There are a bunch of people from a bunch of different countries traveling on a steamer called Kerberos from the UK to New York City. And, yes, I know I already said that. Each of the people we focus on seems to have some sort of major loss or secret in their lives. And in each episode, we, the audience, are kind of brought into what those things might be as the passengers go through some sort of outer body experience or dream and some omnipotent voice that tells them to “wake up.” That voice always seems to be in English for some reason. Which seems odd considering many of the characters don’t speak a word of English. But, whatever. We hear that there is another ship from the same fleet that was lost at sea prior to their journey that is now mysteriously making contact with Kerberos. The captain (Dark’s Andreas Pietschmann) decides he’s going to go save the ship and reroutes Kerberos to intercept it. When they come upon the ship, it’s clear that it’s been abandoned, with all the passengers and crew missing, save a weird, mute child they find locked in a cabinet. They bring him aboard the Kerberos, and things immediately start to unwind. I’ll leave it there. But suffice it to say, things get wacky and lots of people don’t make it to NYC.

This is a tough show to talk about without giving too much away, but things will feel eerily familiar if you’ve seen Dark. There is dread and death and then lots of crawling down narrow passages that lead to other worlds or other versions of this world. This oddball mix of magic and science fiction. And this pace that goes from relatively languid to kind of hectic. The whole thing ends up feeling not unlike if you threw some people into M.C. Escher’s “Relativity” painting and let them run around for a while in that labyrinth of stairs. It’s a bit confounding at times, but is all held together by the core three characters. The aforementioned captain and his scars and pained facial contortions. Maura (Emily Beecham), the British female doctor traveling alone to the US with some serious memory issues, and clearly the main character if you’re to believe the poster. And the Welsh mystery man, Daniel (Aneurin Barnard), who carries around a blue beetle that can go through walls and clearly has a connection to Maura. Not to discount the weird Danish religious cult in steerage, or the fake Portuguese priest who is actually the lover of the fancy-pants Spaniard who gets a handy from the cult leader’s son. I think? And the geisha who isn’t Japanese, but Chinese. And the stow-away French dude who is there to maybe avenge his former army compatriot, who is married to a woman he doesn’t love, but also has a degenerative, fatal brain condition that causes seizures. See?

While the show does spin out a little when the characters are running around, going down holes and generally freaking out, the thing looks cool enough and gives us enough intrigue to remain a fun watch. The reveal at the end is a fun one, though we obviously know this ship and the passengers are not what they appear to be. Though I suppose that’s made clear pretty early on. I was afraid this was all going to be some The Village nonsense, but luckily the creators didn’t quite go the M. Night cheeseball route. Though, honestly, the whole thing did have a tinge of him in it. I did enjoy this show just for the fact that it’s so weird and so different. Not thematically per se, but the writers just make some choices that don’t feel Hollywood. Maybe they feel more Munich. Or Berlin. I don’t know. But the show is serious without taking itself too seriously. Or maybe it takes itself so seriously that it comes around full circle and doesn’t feel forced. Whatever the case, I’m excited to see where the heck they take this thing in season two. Because where they left us could go just about anywhere. Like literally.