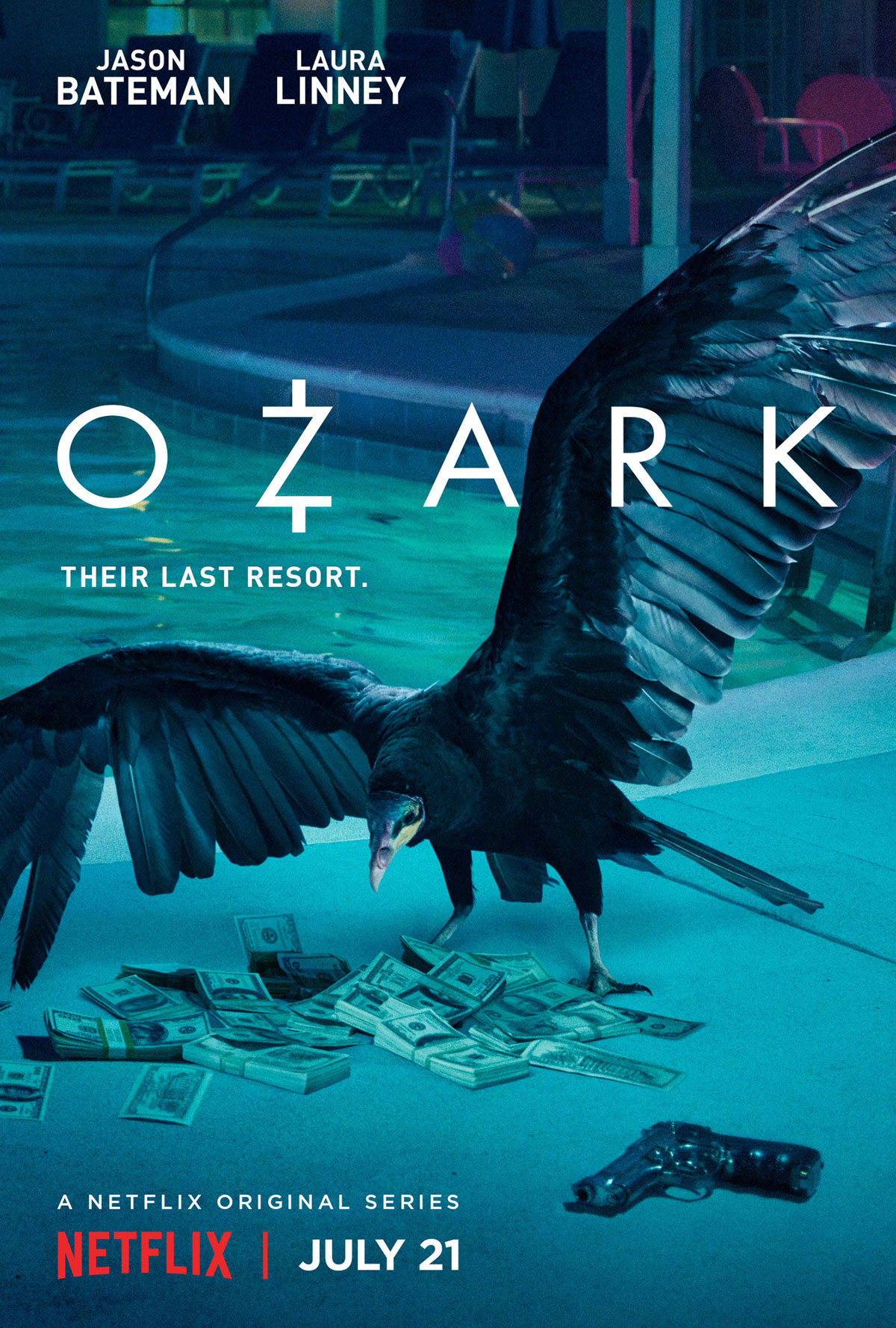 When I first saw there was a series entitled Ozark, my first reaction was, “How is there possibly a series starring Jason Bateman and Laura Linney that I had no idea was happening?” My second reaction, after watching the trailer, was, “Yeah, no. Hard pass.” After all, this looked like a mash-up of every peak, white-guy-doing-the-wrong-thing-for-the-sake-of-his-family show of the last ten years. Something akin to Breaking Bad, but set amongst hillbillies and rednecks in what I thought at the time was probably Alabama or somesuch southern state that I figured constituted the Ozarks. Turns out to be Missouri, but there were certainly a bunch of southerny-sounding accents that still can’t convince me that Missouri is technically the Midwest. Regardless, at first blush, the whole thing just smacked of a sagging retread. But my love of the lead actors and a long plane ride had me rethinking my stance and deciding to give it a chance — even if I only made it through the pilot.

And now that Netflix allows for downloads, I had my viewing menu for my flight out to and back from LA. Ten episodes of Bateman and Linney running around the woods and boating and stashing cash for a Mexican drug cartel. And this, as it turns out, is exactly what the series is. Bateman, a financial advisor in Chicago, is a numbers guy. He and his college friend run a small financial service firm seemingly made up of just the two of them. Through what appears to be complete coincidence, a Mexican cartel dude comes to them (assuming, as we have to, that the cartel runs stuff through Chicago for some reason) to launder their drug money. Through a pretty ridiculous situation that is basically yada-yada’d in the first episode, everything with that relationship goes to shit and Bateman ends up convincing this otherwise very serious cartel dude that he can move to the Ozarks to launder their money rather than doing it in Chicago. This whole premise is relatively silly and nonsensical, but it gets our characters into the fish-out-of-water situation the showrunners need to get them into to get them embroiled with the “locals” and others that become the secondary source of conflict in the show. The thing for Bateman’s character is that he already has conflict on two other fronts: a time-based undertaking in which he has to launder eight million dollars as a test for the cartel, as well as his deteriorating relationship with his wife, who is not an innocent in their laundering operation, but has wandered from the marriage and becomes more of a business partner in getting the money laundered in a new and stressful situation. And, of course, rednecks abound.

What doesn’t abound is laughs. Like none. No, this is serious Bateman. And serious Linney. Both of whom spend scenes endlessly staring, lips pursed, into the distance. Sometimes talking. Sometimes not. But mostly speaking — when they are speaking — in clipped, understated tones,  despite the fraught situations. In fact, I don’t recall even the hint of a smile on their faces until the last minute of the last episode. And even then, it’s muted. It’s not as if I expect Bateman to turn into Michael Bluth or something, but even in this Bateman era of playing the straight-man, put-upon white guy (which is essentially what his character on Arrested Development is, along with just about every other hang-dog character he’s played of late), this one is among the most generic. Not his character, Marty Byrde, per se, but the archetype he’s playing. The stoic, truth-telling liar. We have respect for him because he’s sticking up for his family and doing everything he can to protect them against forces far and wide. He’s a cerebral dude, not a fighter. Several times, when threatened, he rolls over and gives up money, but never his family or friends. Other times, rather than evade and obscure the truth, he just sighs and admits his misdeeds. He watches, with detached deadpan, a video of his wife having sex with another man. So, on the surface, he seems honorable. But we eventually see that he takes the gig — unlike many of this character type – purely out of greed, under the auspices that having a bunch of money will set up his family for life — a family that by all accounts seems to be doing just fine in their nice home in the Chicago suburbs. It’s not the typical “Oh no, I have to do one last job because they’ve kidnapped my daughter and will murder her if I don’t launder their money for them” thing that is typical. Nope, just pure greed by the looks of it. I’m not sure if that’s laziness or a twist on the writer’s part, but we all know how dangerous Mexican drug cartels are, so…

The thing is, the buzz for this show has built over time. I’ve mentioned it to people and people think it’s great. Besides killing like ten hours on a flight from LA and back, I’m failing to see why. I mean, the actors are good, the spouse/business-partner aspect between Bateman and Linney is interesting, but there are some seriously ridiculous things on this show. A whole group of characters keeps referring to “rigging a dock,” as if it’s a thing. For all of you not in the know, “rigging a dock” apparently refers to taking an electrical wire and hooking it up to the metal ladder that one uses to climb out of a boat onto the dock, thus frying the person who tries to exit said boat onto said dock. A quick Google search tells me there’s no such thing. The cops and FBI are completely inept. Like keystone cops inept. People “jump” from 80 stories up. It’s ruled a suicide, when it clearly isn’t. People take a liter of heroin (with no history of taking heroin) into their f’ing jugular and it’s ruled an overdose. People disappear when involved in nefarious activity and the cops just kind of shrug and say they’re probably on vacation. Rather than send minions, drug lords show up in-person, alone, to check stuff out. It’s all silly and a little bit sloppy. But we ignore it because we get to watch Jason pout.

Look, maybe I wasn’t as into this as I should have been because I was watching it on a plane on a four-inch screen while a woman’s head was falling into my lap after she popped a couple Xanax and downed three mini bottles of whiskey. But, honestly, I think I’m having a little bit of good, bad-man television fatigue. Granted, he does manage to go the entirety of the season without killing anyone or cheating on his wife, but when we pull back and look at the fact he’s laundering cash for a business that pours hundreds of millions of dollars worth of heroin into the American market, perhaps he’s even worse than any of the others we’ve come to know and only kind of love (and hate). So why Ozark and not, say, Miami? I figured it was some sort of incentive by the state of Missouri to film there, but it turns out it was actually shot in Georgia. Plus, shouldn’t it be called Ozarks?