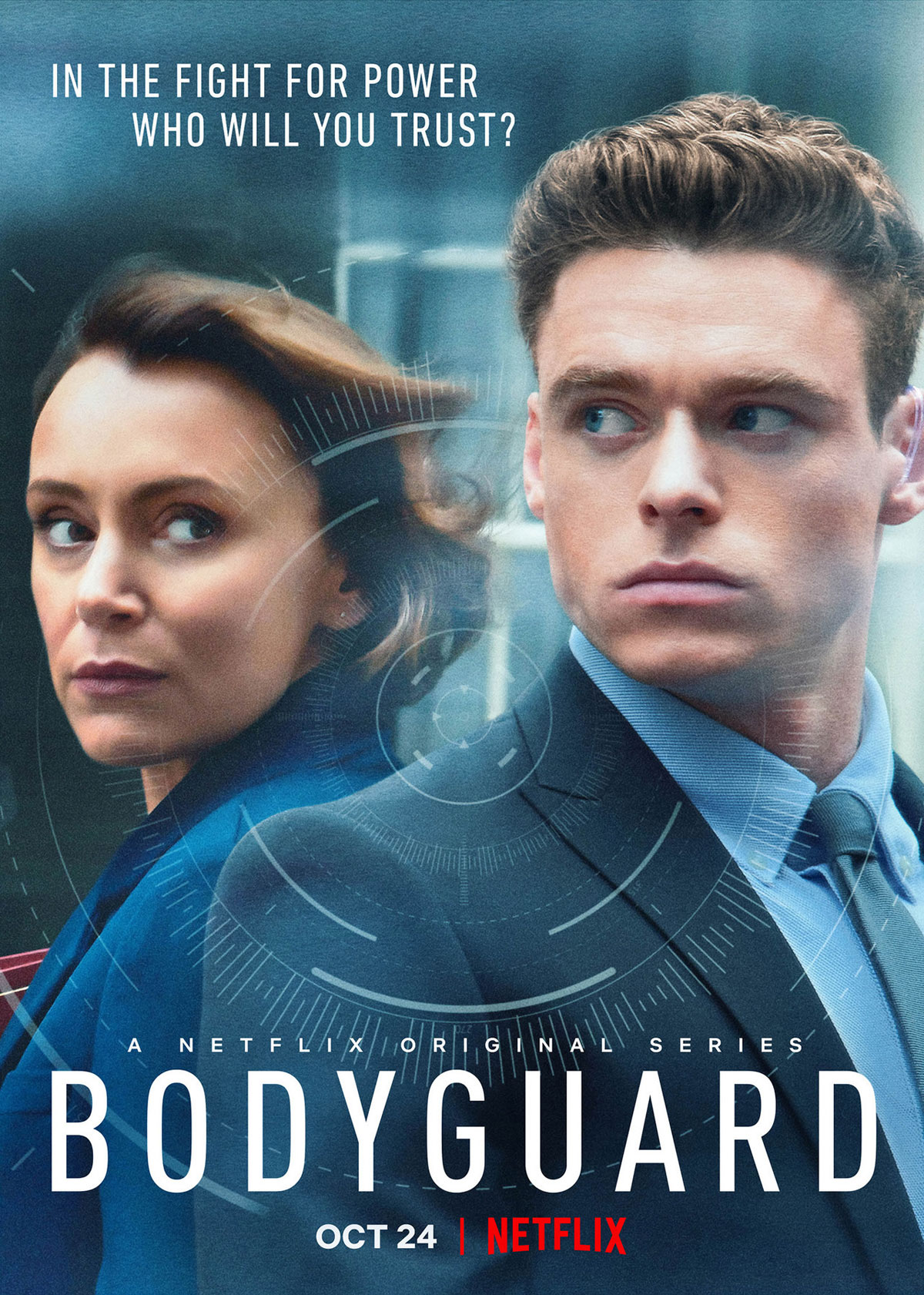 Apparently Bodyguard was like the most popular television program in the UK since that one where they watched the prime minister fuck a pig. Oh, you wacky Brits! But, seriously, I’m serious. The English and their ilk just ate this thing up, what with its political intrigue, Bourne Trilogy-like action and soap opera narrative, it was purpose built for middle-aged seekers of television content. Honestly, it’s as if they constructed this entire show from the shed skin cells of a group of 35 – 64 year olds and produced a clone that gained sentience as a British cop show.

So you have David Budd (Richard Madden), whose name sounds suspiciously like David Butt the first bunch of times he says it. He’s an ex-solider who is now working for some branch of the London Police that protects political people. It seems like what us Joe Americans would call the Secret Service. The thing with David is that he’s clearly suffering from PTSD, which he’s also clearly hiding from his employers. The effects of this manifest itself as anxiety, some possible drinking problems and a dose of uncontrolled anger. Though these symptoms don’t seem at all consistent, which is something that plagues a lot of these shows where the main character has some sort of mental condition. They come and go when it’s most convenient for the plot and least convenient for the character. Even with his “issues,” right off the bat he foils a terrorist plot on a London train and becomes the toast of the town, so to speak. Well, he becomes as much of a celebrity as a cop can be, I guess. So, as a reward of sorts he’s given a plum assignment guarding the Home Secretary, which is not something we have in the US, but seems like a big wig over in the UK.

The thing is, the Home Secretary, Julia Montague (Keeley Hawes), is kind of an asshole. She’s a super-political, conservative shitbag who seemingly doesn’t like immigrants (or is exploiting their potential terrorist leanings) and is pretty abusive to her subordinates. All the things David cares about, she thinks the opposite. She’s like the perfect lady to fall in love with, right? Well, I sat and watched, thinking that there’s no way that would happen. After all, this is a serious 24-like show, right? Well, it turns out I completely misjudged things and the appeal of some sort of romance — however unlikely and asinine — was probably insisted upon by some suit somewhere at the BBC or wherever these British dudes hang out. I mean, sure David’s head is a little scrambled and he’s lonely after his wife left him and took his kids with her, but he’s David Fuckin’ Budd, the guy who foiled the big terrorist attack. Plus, he’s also Robb Fucking Stark and has great hair. So he probably could have his pick of the hot toddies (I think that’s what Brits call their ladies) hanging at the local pub.

Anyhow, there’s a bunch of political games and warring political factions that seem to have their own moles and motivations. Of course David Budd is set up and made a patsy and has to wriggle his way out of things by undergoing his own Jason Bourne / Richard Kimble machinations. Some of the situations, including an extended hostage scene that feels three episodes long, are absolutely absurd to the point of nuttery. And Madden plays Budd with a Scottish intensity that borders, at times, on Rain Man. He also gets drunk on like two light beers, which seems very un-Scottish of him. But I chalk that up to bad editing. All this said, the show is entertaining. It’s pop TV dressed up as The Honorable Woman or, more so, early Homeland. In fact, Homeland really is the closest comparison in terms of tone and approach. Budd, like Carrie Mathison, has one job to do, and it’s really unclear if he’s actually good at that job. And, of course, his personal choices are disastrous and would land anyone outside of a television drama on the unemployment line faster than you can say sexy cop. So, sure it’s sugary and sometimes silly, but there is definitely enough here to qualify it as a show worth binging if you’re in for a long flight or need something relatively succinct to watch over a weekend.