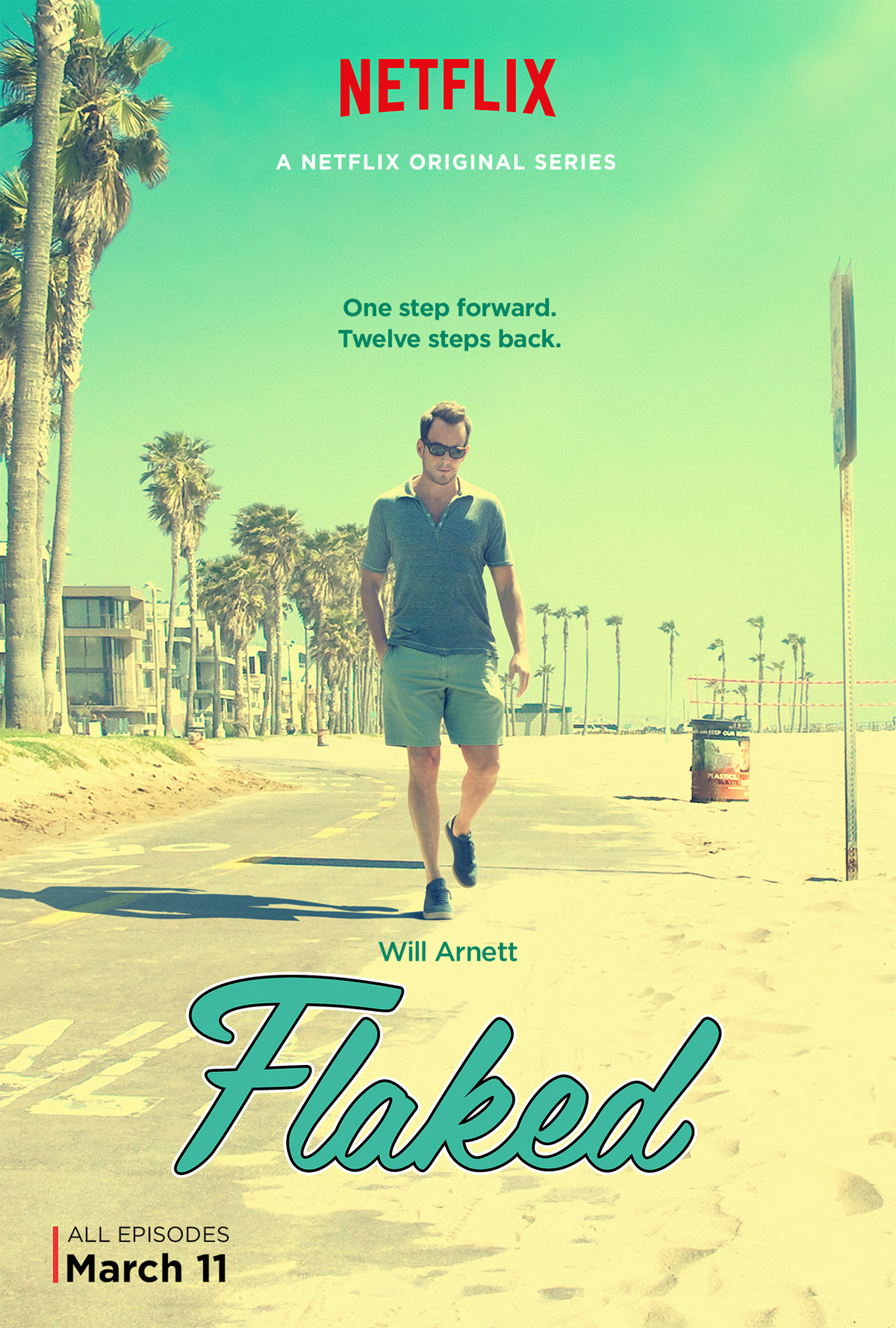 I’m not sure how Netflix’s marketing algorithm works. And I use algorithm as a kind of snarky and/or confused term about why some of their shows get fanfare or banner ads or even a mention on one of my many podcasts, but then shows like Flaked — a show starring one of the more out-there dude, Will Arnett, in the past handful of years — gets absolutely nothing. I didn’t even realize it was a thing until I saw it in the feature spot on my Netflix feed. I saw Will in hist shorts on what looked like a Southern California beach and wondered aloud whether it was some old failed network show (after all, it also seems he’s been on a bunch of those lately) that Netflix had picked-up. But, no, it was an original show produced for Netflix and dumped in their way they just kind of dump things on the platform and let them do their thing. Such a weird business plan, but one that I imagine works for them.

The gist of this show is a simple one. Arnett is a man-child who has moved to Venice, CA to live a life of loaf after killing someone in a drunk-driving incident. He rides his bike to AA meetings and has an insecure best friend who he sponges off of, who in turn tried to get his female cast-offs. There is a crew of your typical West LA slackers who hang out in various degrees of sobriety and stonerness. Arnett is your typical white-guy, over-forty slacker who, unlike Duchovny’s Hank Moody from Caifornication, doesn’t seem to have anything brilliant or iconic in his background, but appears to just kind of always have been this caddish guy who is charming, but damaged. Just to add to this, he owns a store on a main drag in Venice that sells hand-made stools. Though the stools seem to only come in one style and don’t ever sell. So he plays a lot of paddleball and goes to lunch and mooches artisan coffee from one of the kids in his ten-step group. He picks up chicks much younger than him and says the word “Venice” every other word.

So this is the setup. It’s a tried-and-true, middle-aged white guy with a questionable background trying to make good-ish, but tripping over himself at every turn. Except he isn’t really. Either trying to make good or really tripping up all that much. We’re reminded constantly by other characters that “he’s a good man,” but we honestly don’t see much of that at play. He supposedly helps people — that’s apparently his thing — but we don’t actually see him help anybody. He goes to his AA meetings, but isn’t a sponsor. All we can tell he does at those meetings is tell the sad tale of his killing somebody over and over again and pick off the young, vulnerable ladies who come to share. And then there’s his awfulness. Sure he’s kind of selfish and kind of lazy, but there are very few situations — especially with the kind of craziness we’ve seen in episodic television over the past few year — that make you do that “oh no, what the fuck are you doing, dude!” thing. His infractions are minimal and inane.

Wrapped in all this is a twist. Yes, a humdrum show about a guy who essentially rides his bike around Venice, goes to AA meetings and does rom-com stuff with his equally middle-aged bros has a mystery at its heart. Okay, it’s a mystery, or a “twist,” that I figured out after the first time his estranged wife shows up — Heather Graham playing a famous actress — and kind of changes the landscape. The issue isn’t that the twist is telegraphed to some extent, it’s that this is supposed to be a comedy, and it’s not at all funny. Or maybe it’s supposed to be a comedy, I’m not really sure. And I don’t think it knows what it is either. By the second episode I wasn’t really looking to laugh, I suppose, but the wandering, meandering narrative didn’t ever really settle in. Arnett’s character, Chip, is clearly a guy who has trouble with the truth, but he’s so kind of down-the-line typical that he blends into the sands of Venice beach and the eventual stones of Palm Springs that he visits.

I binged this thing in one sitting, all eight episodes streaming in the background as did work, folded laundry and did whatever one does while Netflix plays on one’s large flatscreen. I felt at times that I connected with this thing, but at other times the lingering looks and over-seriousness of Arnett and the show itself made me want something else. Something lighter and way less life-or-death when in fact there was very little of that going on. What are the stakes here, really? Gentrification in a community that in real life is already gentrified? The failure of faith of a group of people in a man who is not worthy of their faith? These are small beans we’re talking about here based on the heaviness with which the show treats itself. Do I care if Chip falls off the wagon? Not really. Do I care if he loses his useless stool store or gets with the woman with a deep-dark secret herself? In another world that is not this crushingly self-serious one, sure. If they played it straight and let the funny be funny and the mysteries not weigh so heavy on everything, this would be a much more dynamic and interesting show. But, as it stands, it’s just something that can run in the background like a dehumidifier and occasionally garner your attention when the compressor kicks in.