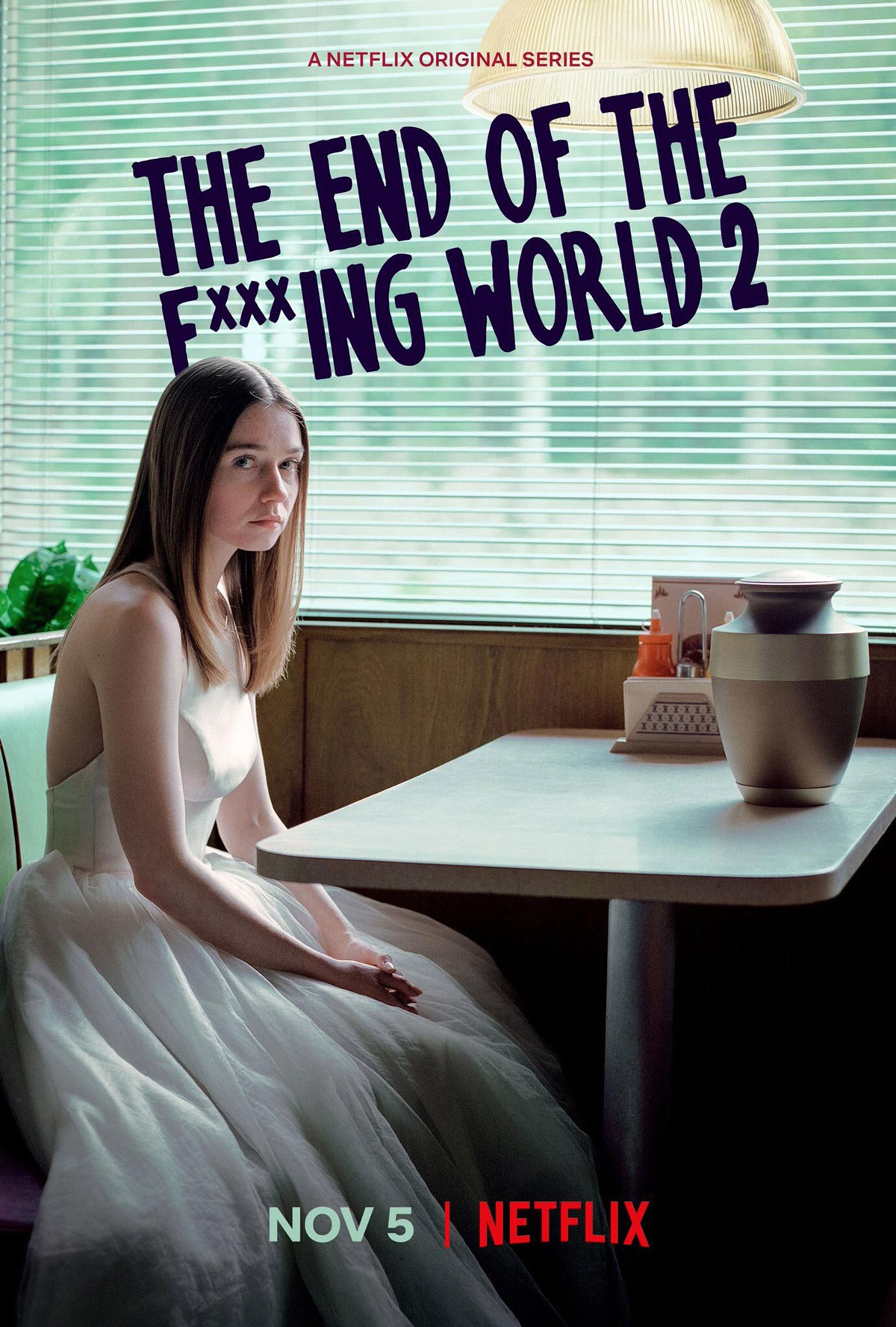 I think I’m the only person in the fucking world who watched The End of the F**cking World. Well, maybe there were like 25 of us who watched Season One, but I’m definitely the only one who watched Season Two. It’s a show that isn’t for everyone, but to be the sole viewer feels about as lonely as the show itself does.

I honestly wasn’t sure if they’d continue the Bonnie and Clyde tale of teenaged James and Alyssa from season one. It seemed to end in a decent place — but a down place. Because this is how this show rolls. It’s ostensibly a comedy. But a very, very dark one. [Spoilers of season one from here on out.] With Alyssa free from their capers and James lying shot and dying on a beach trying to draw attention away from his partner in crime, Alyssa, it felt like an organic ending. But the writers clearly felt there was more to tell.

Enter Bonnie. A character that didn’t exist in season one, but fills a huge role in this one. She is a young woman who falls for the evil professor character from season one whose house James and Alyssa break into and then murder when he attempts to rape Alyssa. Dark, right? A bunch of shit happens, Bonnie ends up in prison and eventually finds out her lover, the professor, is dead at the hand of Alyssa and James. She’s psychotic, collects news articles about them while behind bars and plans her revenge. She eventually gets out of prison and makes it her life’s mission to kill the two kids who killed her love. All of this is pretty twisted, of course, as the much older professor was taking advantage of young women, including Bonnie, and up to all sorts of weird child porn stuff. Not to mention his attempted rape of Alyssa.

Meanwhile, Alyssa was exonerated and has moved on with her life. James survives his gunshot wound and is convalescing, reconnecting with his father and dealing with the two year gap between his love affair with Alyssa and his life now with a colostomy bag (which seems to kind of come and go) and no future. It’s all a dreary, rainy British hellscape. The Alyssa character is basically a zombie. And the James character is all sad, red eyes and simmering angst. As you’d imagine, the two characters eventually reconnect and have to pair up again to now fight this malevolent force in the form of Bonnie.

There’s something very different about this show that really appeals to me. The plot is relatively simple and gets out of the way in deference to character development. The actors are all wonderful and sad and violent and still somehow real. Naomi Ackie is especially great as the critically damaged Bonnie. Don’t let her three-second arc as an ex-Stormtrooper in Rise of Skywalker fool you; she’s an engaging, incredibly affecting actress. And like the other characters, she has this odd stillness about her. It’s obviously a tonal choice by the show’s creators. And one that adds to the tension and shock value when something violent or emotional does happen. James (Alex Lawther) is that emotional backbone, as well as the funny (but not like ha-ha funny) core of the show. His lanky awkwardness, sincerity and hang-dog look is just perfect for the role. Jessica Barden’s Alyssa is played with a cool detachment that definitely raises the question of whether she is soulless or in shock or just biding her time until something comes along to snap her out of her stupor.

The show itself has a very distinct look to it. And a very cool style that remains consistent throughout the season. This season is very different than the first in terms of the characters’ motivations, which makes sense given what they went through. The nice part is, it’s different, but still feels part of a whole. And, like the first series, it’s a really simple binge. In fact, one could probably do both seasons in one weekend. It’s not exactly uplifting, but it does end in a way that we know the world isn’t necessarily going to fucking end. The series, however, seems like it does end in a pretty perfect place. It’s a rare little gem that I hope expands beyond my family and into those who like a little dark humor in their lives.