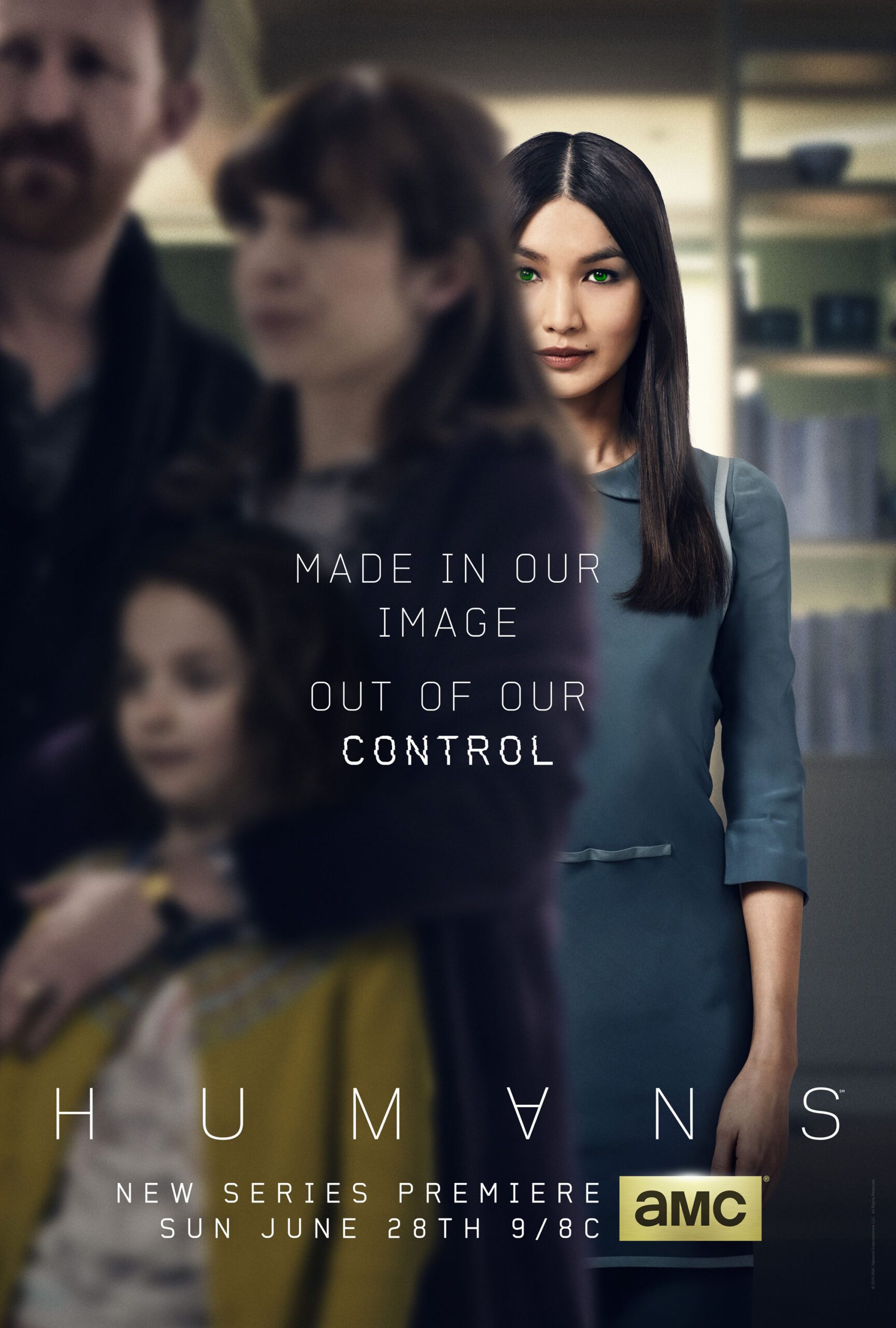 Oh A. I., why do you haunt my life so? I feel like I mention that movie in every third one of these things I write. I’ve mentioned it in movie reviews, book reviews and album reviews. And now a television review. Because, well, that movie had an effect on me for some reason, despite seeing it originally in a theater full of hooligan-ish UESers booing the ending. Literally booing it. Lame. Anyway, here is HUMANS, a show that is clearly influenced by that movie, along with everything from Blade Runner to The Terminator to Making Mr. Right. And, of course, Black Mirror.

So, set in a future England somewhere, androids (aka “synths”) are now part of everyday life. They seem to mostly be in service roles. Maids, nannies, elder care nurses, customer service reps, sex workers and basically everything that could be filled with a person with very little need for feelings or essentially going off script. They are, with some small exceptions (their eyes seem to glow a funny color and they don’t consume food), indiscernible from humans. Well, kind of un-fun, stiff humans.

Tied up in all this is a group of synths who seem to have consciousness. Or at least don’t follow the typical protocol that all synths are programmed with. Rebel androids, I suppose. They are searching for one specific synth (the woman in the image above), with whom they have a connection. This android they’re looking for is employed as a nanny/housekeeper for a struggling family. She seems to be just your run-of-the-mill hot robot nanny, but occasionally shows flashes of having something deeper. Indicating that she may also have some of the sentient nature that these others have.

SPOILER in this paragraph (I suppose). So we eventually find out that this group of sentient synths are direct descendants (so to speak) of the inventor of the android technology. One of them is his dead son in whom he implanted robot technology to bring him back to life and the others were essentially his “family” that he employed to both take care of his family and test his theory that robots could be conscious creatures if programmed to be so. So now they’re this family of robots just trying to make it in the world, find their missing family member and live out their days. Save the fact that there is this moral conundrum with actual humans about if machines should have consciousness at all. So they have to lay low and basically hide the fact they’re robots as they move through the world. After all, then they’d essentially be immortal humans in just about every way. And what human would want that? What with them just being better looking, more perfect versions of us? Where do we draw the line, eh?

The point here, at least how I see it, is to question what makes us human. Does the fact we walk and talk and look the way we do make us human? Can we as humans make true connections to these “others” just because they too walk and talk and look the way we do, even if they can give us no true love in return? Can we form connections with synths because they care for us and our children and our parents or remind us somehow of our deceased relatives physically, even if they can’t return the feelings we have for them? What if they could? What if they could look just like you and act just like you, but be a more perfect version of you? A version that could be programmed never to stray, to screw up at work or get sick? Sounds great. But not so much.

While this interesting moral quandary is the basis of the show, and the characters are compelling, the acting decent and the show itself pretty nice looking, this feels like territory we’ve been over a multitude of times in the past. They try to re-package it in a new way by wrapping this initial season in a familial mystery of sorts, which works in its insular way. They hint at the larger world of the synth outside of both the human family and the android family and their extended “makers,” but it is this familial dynamic that makes the show good. The finale ends up hinting toward a larger, more world-beating, technology story in the second season that seems to move away from this more focused mystery and into more broad territory that seems, at least to me, less original and more of the tired battle of the man versus machine story. Of course I could be way off on that and it could take a turn inward. I didn’t watch the original Swedish show, Real Humans, from which this show was adapted, so they could have already moved on to season two and the synth revolution may already be in effect and be awesome. Or maybe they all get annihilated and the show turns into Little House on the Prairie. Whatever the case, I’ll be watching. And so should you.