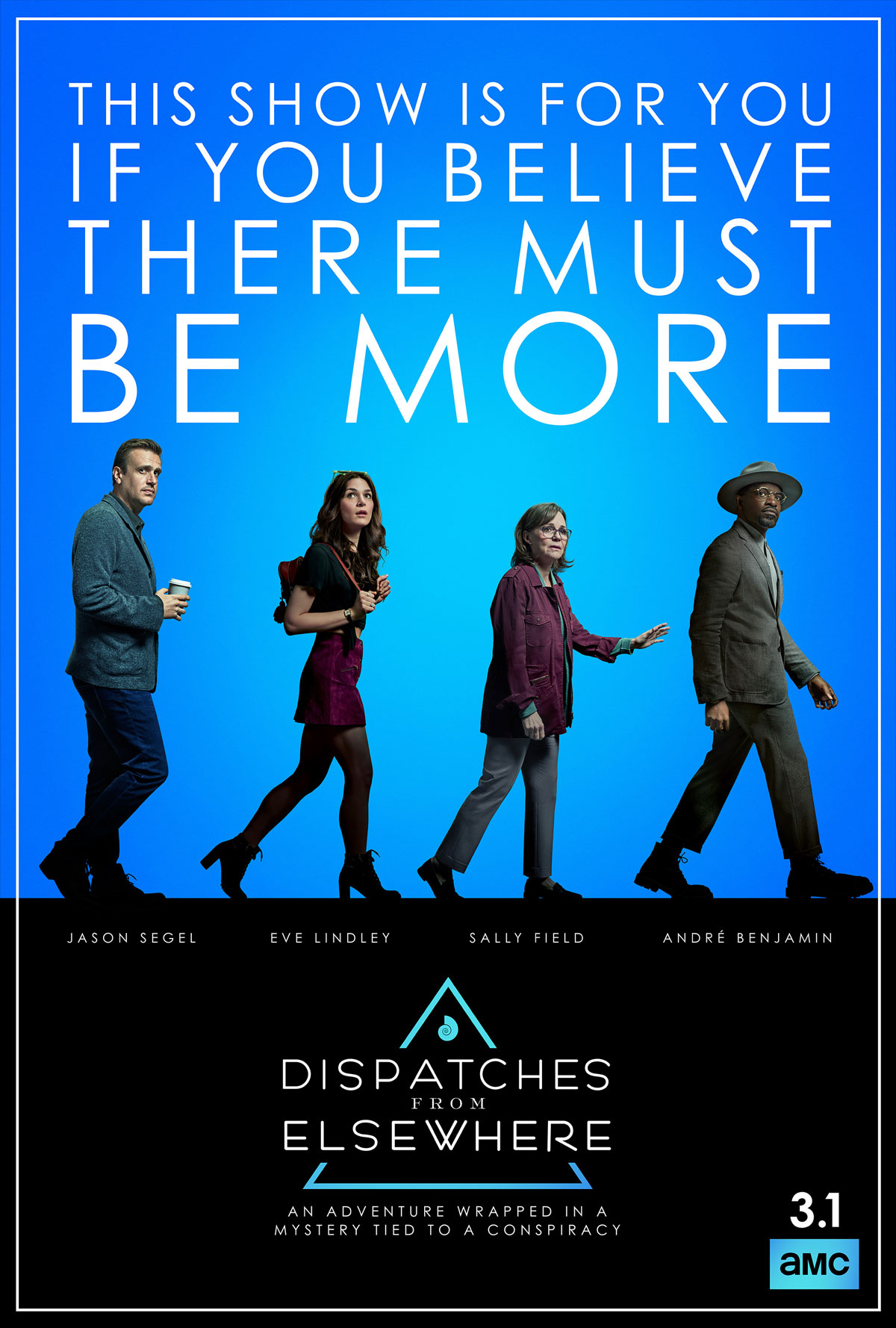 This show kind of came out of nowhere for me. It seems that something called Dispatches from Elsewhere that was created by one Jason Segel would draw more attention and interest in popular culture than this seemed to both in its ramp up and after its run. But I think the oddball and personal nature of it probably was a hard sell to the general public used the “There’s this team of sexy forensic crime scene professionals who investigate murders while quipping and make eyes at each other” pitch. This one is way harder to explain.

Did I mention this show also stars Sally Field? Forrest Gump’s mom. Gidget? Mother of a son who also happened to be in my class in high school. Which is the same high school Jason Segel went to? Coincidence? Not in the world of Dispatches from Elsewhere. Because in the world of the show there are no coincidences. And, yes, this is kind of how this series went.

The idea here is that there is a mysterious game of some sort that takes place in Philly. Flyers with pull tabs show up on lamp posts promising weird stuff and those who pull a tab end up indoctrinated into this wild series of what amount to over-the-top scavenger hunts. The series is based on a documentary film called The Institute (which I also watched) that documented a similar alternate reality game called the “Jejune Institute.” All the elements of said game are in the show. A game which leads groups of people to be ostensibly searching for something real, but end up with an experience and the joy of finding the something behind the something. Like the documentary itself, it’s completely unclear what’s real and what’s imagined… In fact, I’m not even certain the game actually happened and that perhaps the documentary was in itself a fiction. It’s kind of mind-bending in the same way Exit Through the Gift Shop is.

In the forming of teams, we get this team of four very different individuals: Peter (Segel), Janice (Field), Fredwynn (André “3000” Benjamin) and Simone (Eve Lindley). They are brought together under the umbrella of a place called the Jejune Institute, which is one part Dharma Initiative from Lost and one part Dianetics. There’s also a touch of the show Maniac, which also coincidently co-starred Sally Field.

So, we have these four people, all of whom have lives that they’d probably rather not be living. Peter is a walled-off disaster of a man who runs playlists for a Spotify type company. Sounds like a dream job to me, but apparently it’s basically days filled with compiling other people’s tastes. Janice is caring for a husband who has seemingly been in a coma for a long time. Fredwynn is a reclusive tech genius who may be brilliant, but can’t connect with other humans and has been exiled to his upscale home. And Eve is a trans woman who seems incredibly uncomfortable with her own existence. So we see here that this game — which is meant to open your mind, make you work with others and expose the beauty of every day life — is like a giant therapy session for our protagonists.

We are then sent on a ride. We are pushed and pulled in our understanding of the Jejune Institute and if its leader, Octavio Coleman (Richard E. Grant), as an evil cult leader or a benevolent teacher. And as we go along, the game and the reality of it becomes cloudy. Is it a game? Is it a bespoke experience just for these four people to learn and come together and grow? Or are they all insane in their own way and just kind of concocting things in their own heads to avoid their own sad realities? Or… is the reality that this is indeed just a game and the people involved just actors acting at the behest of writers and producers? Because we know in the real world that this is exactly what it was, but this is a TV show, so they are able to manipulate our sense of what’s what.

Ultimately, it’s a show about relationships. With one another. With ourselves. What we believe. What we choose to believe. And when you’re kind of exploring these themes, the narrative can get a little muddy. Some will strike you, some won’t. Sad sack Peter can be a little much. Seemingly bipolar-ish, obsessive Fredwynn can seem a little much. The number of feints in the group’s searches and breaking apart and coming back together, getting mad, making up became a little tired as we rounded act three, but then we’re kind of thrown a curveball.

Because, as you can imagine, this is Segel’s project. And despite his stoner, goofball persona he’s built in television and movies over the years, he’s a pretty deep dude. Or that’s what he wants us to think. Because we delve a bit into his psyche. And the meta-ness of this whole television project comes a bit into focus. His character, Peter, is a man doing others bidding. An automaton, really. Zero confidence. Zero ability to discern what he actually wants or needs. Even his relationship with Eve on the show is put in jeopardy because he can’t choose which he likes better, cake or pie. Segel then intertwines the Peter character and the Jason reality and things just get real. But even in that he realizes he’s undermining his own message of community. It’s confusing, but also a pretty deft trick.

Overall, this was definitely an interesting experiment on Segel’s part. The play with reality and fiction. The attempt to capture something unusual. Because it was truly a different type of programming. Yes, certainly based on source material, but wholly executed out of Segel’s brain. There are some really great moments and definitely some parts that sag a little. But overall the concept is strong, the relationships atypical (and unashamed) and the visuals cool. I appreciate the effort and like that it exists in the world. I’m not certain how they’d do a second season given how it wraps up, but I suppose in this reality anything is possible.