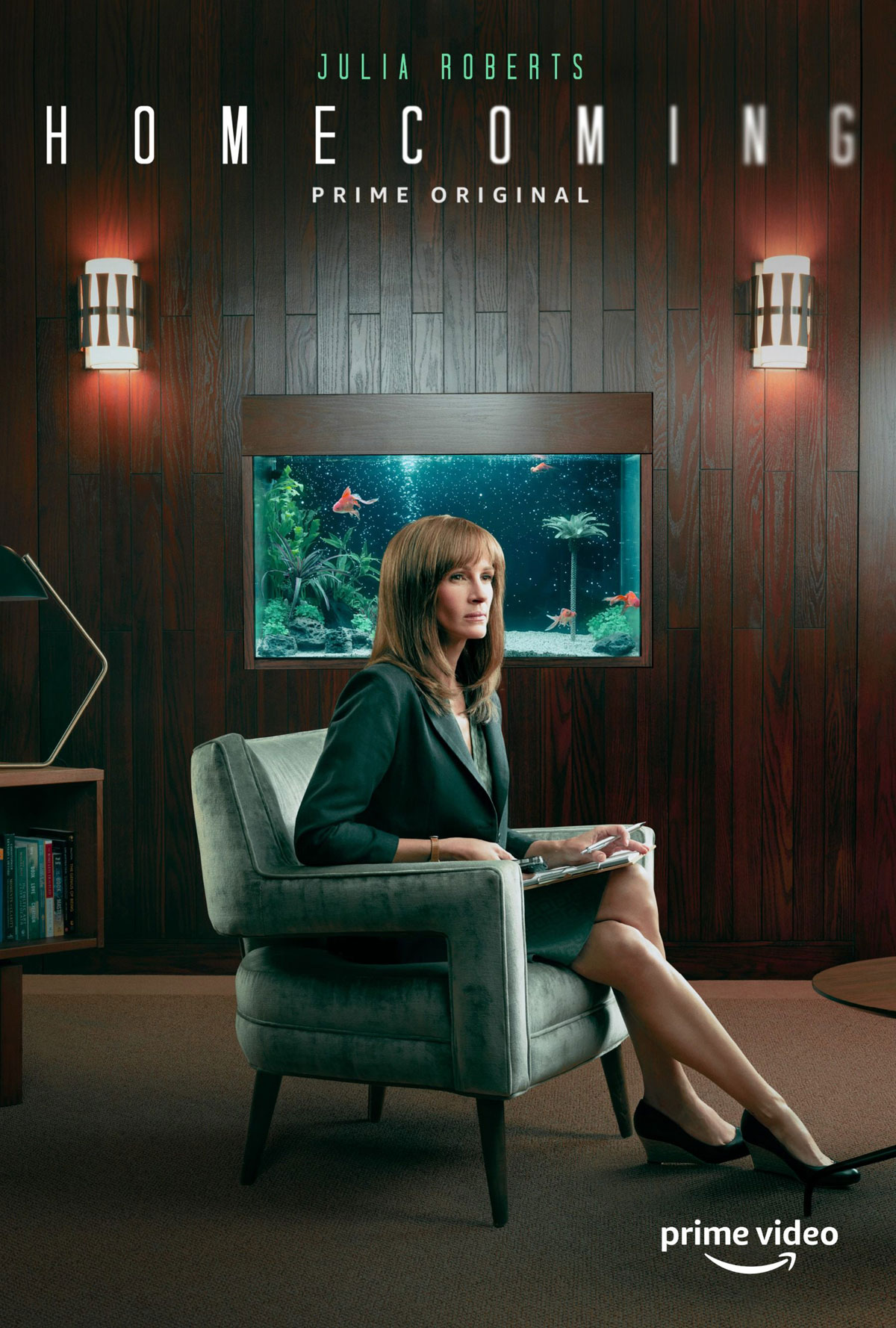 I’m going to go out on a limb and say that Homecoming is the first ever scripted television show based on a podcast. It’s like the universe has swallowed its own stomach. I mean, when I listened to the pod a while back my first thought wasn’t, “Man, I wish I could swap Catherine Keener with Julia Roberts and David Schwimmer with Bobby Cannavale and see it all on screen!” I took it for what it was and that was it. And it was… interesting, but uneven and ultimately kind of hit the ceiling of the medium, which stifled their ambitions. So, I suppose it makes total sense that they take what is a promising premise and shift it to a medium that can expand on something that originally had to shoehorn dialogue into the contrived boxes of tape recordings and phone calls. And with visuals, of course, which does, in fact, eliminate some of the complaints and annoyances I had about the podcast.

It doesn’t hurt when you get Sam Esmail of Mr. Robot fame to be your director. The man has a very, very strong vision and a built-in conspiratorial point of view that translates well from his other show to this one. It’s a point of view that is often skewed and filled with dread and doses of paranoia. Not in a horror movie kind of way, but more in the old 60s and 70s thrillers like The Parallax View, The Manchurian Candidate and like late Hitchcock and even some vague nods to Kubrick. Think of anything that makes you feel a bit oogy while watching it. And is stylized to within an inch of its life. That’s kind of Esmail’s thing. He’s like television’s creepy Wes Anderson.

The fascinating part about this whole thing is that apparently the podcast’s original creators never envisioned it as tv show. I kind of assume that everybody writing anything imagines it as a movie or tv series these days, but in an interview I heard with them, they claim they never even imagined what any of the characters looked like, what the locations looked like or really visualized anything at all. They claimed they really wanted to focus on the dialogue and the interplay between the characters and it never dawned on them to picture any of it in their heads. That seems weird — and oddly disingenuous. But that’s just me being my usual skeptical self. I guess that made Esmail’s job easier, then, as he could just take the original series and make it look however he wanted. The cool part is that he made it look the way I pictured it (but cooler). Because I — like every other normal human being — turns everything I hear into a television show in my head. Weirdly, they almost always star Dax Shepard.

They also considerably changed some of the weights of the characters from the podcast, making some more important and others less important. Quite honestly, the balance in the show felt way more in line with what it should be. Again, I think the podcast added some relatively superfluous characters so that you weren’t always listening to the same voices. The medium doesn’t allow for seeing people do research, or sitting silently contemplating or even just speaking with their faces. Esmail, being such a visual storyteller, really expanded the palate of the narrative and allowed it to breathe quite a bit more.

I liked the series. I did. But one of my biggest question marks was “what are the stakes?” This ain’t one of those Marvel films where the survival of the planet hangs in the balance. And I actually like that that’s the case. But there are many instances where the music cues tell us there is some existential crisis that we’re supposed to be on edge about. But, really, we don’t get the breadth of the conspiracy and how it’ll affect a larger number of people outside of the few we’re introduced to. Sure, we can extrapolate, but even though the show is expanded from the podcast, it still feels very insular and claustrophobic in its presentation. Very small in scale and personal to the few characters we’re introduced to. They’re really asking us for a large emotional investment for what amounts to one guy who is not in any type of immediate mortal danger. And, yes, stakes aren’t everything, but I just wish there was a little more on the line in order to justify the investment (and the evil music).

So, what are we talking about here? A somewhat nefarious government contractor called the Geist Group has an experimental program that welcomes back soldiers from Afghanistan. Billed as a reintroduction program that uses a vague treatment that includes some kinda-sorta talk therapy and a light therapeutic drug regimen, the program is meant to kind of ease the soldiers back into society. The soldiers are not quite sure why they’re there, and it’s not clear that the workers in the program know why they’re there either. Anyway, Geist’s goal is obviously to get a military contract for whatever it is they’re trying to prove their program does and Julia Roberts just wants to help the soldiers through any possible PTSD they may or may not have. It’s all very, very vague. But as the show goes on we start to see and understand more and more of what Geist is up to. All while a defense department dude in the future looks into what the program was up to when it was going on. The show cuts back and forth in time between the active program and the aftermath (including the aforementioned investigation). But the core thrust/relationship in the show is between Julia Roberts and one of her soldier patients. She is kind of in the dark about the program’s ultimate goal and just wants to help him. So, as she’s kind of figuring it all out in the past (or in the present, depending on your perspective), the Dept of Defense guy is also kind of tracking it down in the future. I’m explaining it poorly, but it sounds interesting, right?

Whatever the case, the show is certainly worth a watch. The ending indicates that a second season may be coming. Or it could be a good ending for a one-and-done as well. The show actually combined two seasons of the podcast into one, but they both ended in the same place. I can’t imagine they’ll do a third season of the pod and then do a second of the show based on it, so the show will most likely outlive its actual source material. I suppose that kind of makes it the Game of Thrones of Amazon.