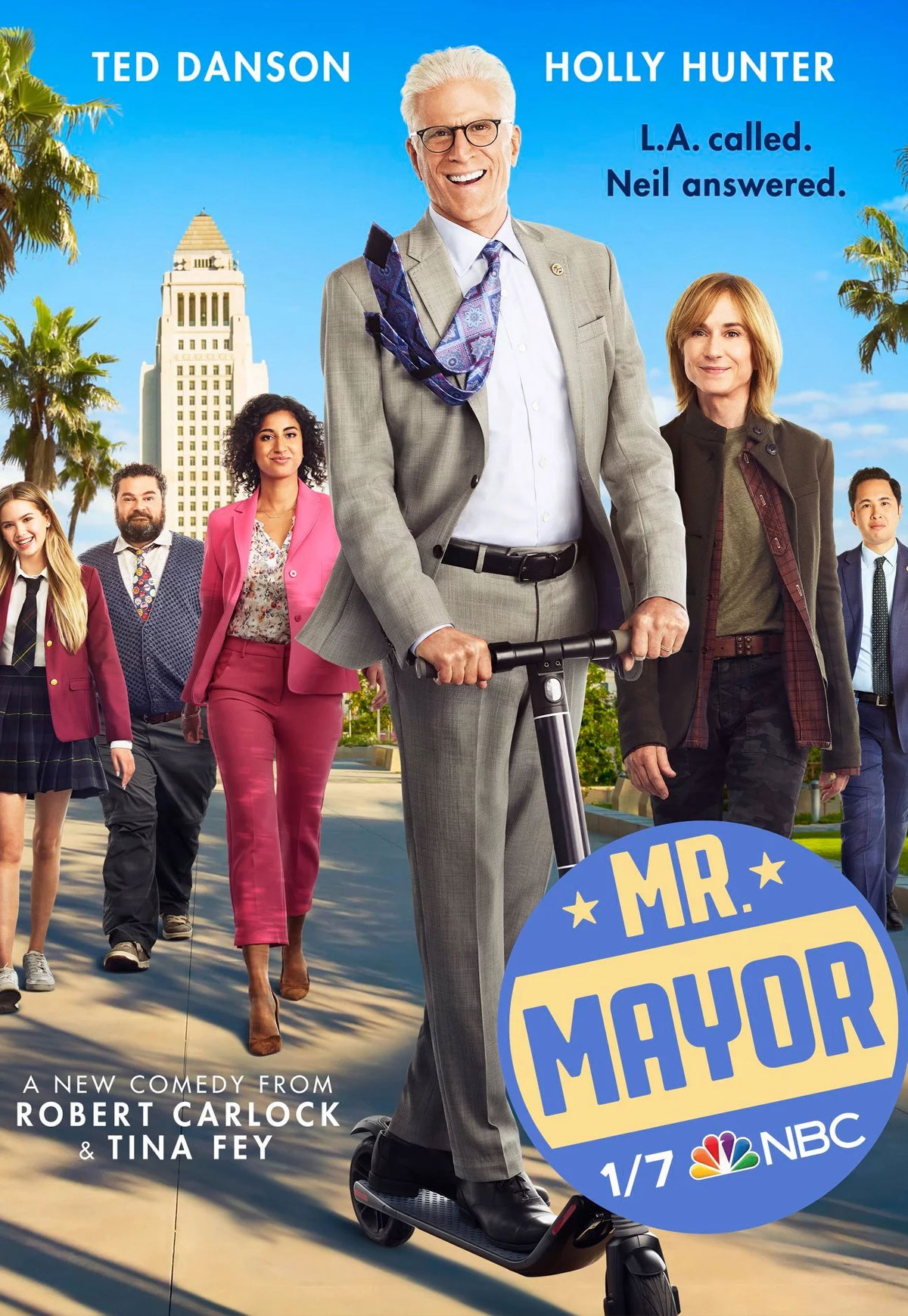 It’s been a minute since we’ve had a new, broad network comedy. Especially one penned by 30 Rock’s Tina Fey. You know the type of show: the shiny joke machine with that upscale, educated white-person flair that NBC does so well. Characters who would just as soon spout some joke that really hits hard at Oberlin or Reed paired with semi-veiled dick and poop jokes all mashed into a 22-minute script of uneven goofiness. Mr. Mayor is that. But at like 60%. Well, it’s that, but skews way more uneven. So like season five of one of these better shows — when the jokes have gotten stale and the writers are just scraping the bottom of the barrel for anything that might land. The second-to-last SNL skit of the night type stuff.

Which is all surprising considering they have Ted Danson. The man is a master of the sitcom. He is truly a treasure. But you know who isn’t? Holly Hunter. Sadly, she is stiff and weird and, frankly, hard to look at as she leprechauns around the set. She was funny in Raising Arizona. And, um, nothing else that I can think of. But whatever you think of her resume, she is not a sitcom actor. She was barely watchable on the otherwise very watchable Succession. But here she feels like someone’s stand-in. Like they had another actress in mind, but had a big “get” with her and just threw caution to the wind and hoped maybe her freakish tininess would get laughs. Because her acting mostly doesn’t.

Outside of the marquee names, Bobby Moynihan is funny as the idiot man boy. Which is kind of his thing. Funny being relative to the rest of the cast. None of whom are even remotely funny. I appreciate they brought on relative unknowns in supporting roles, which worked on a show like The Good Place, but here the very small cast made up of staff in the mayor’s office is kind of lackluster. It’s mainly that the writing doesn’t hand them much. But it’s also delivered with an over-the-top energy and a knowing wink that makes it not funny and not particularly compelling in any way. It’s just kind of flat.

So, we all remember Spin City, right? We remember it starred a tall, white-haired handsome rich guy as mayor, right? I mean that dude was kind of a perfect idiot played by Barry Bostwick. And this one is a smart, but out-of-touch businessman played by Danson. That was NYC. This is LA. And while the two shows share the workplace comedy thing, that one — from my vague recollection of it — seemed way more robust and interesting. Perhaps NYC is just more interesting than LA (my adopted and home cities respectively). Or perhaps someone took the time to flesh out the cast in the “original” and just kind of threw this one together, hoping Danson could carry it on his broad shoulders. Because — and I think this is what made Mr. Mayor feel not quite right — the whole thing seemed rushed. As if it was sent to production without a plan. It felt disjointed and unpracticed. It felt small and insular and just kind of muted. I blame the writers and cast, but that’s just because that’s what on the surface. But maybe with COVID and whatnot, the thing was rushed out? Or something happened that just didn’t allow the thing to set (like a JELLO shot or something)?

The plot here is super-basic. Neil Bremer (Danson) is a retired rich businessman who runs for the mayor of LA to earn the respect of his teen daughter, Orly (Kyla Kenedy). Two things: what is 73-year-old Danson doing with a teenaged daughter, and what the hell kind of name is Orly for a giant WASPy man’s daughter? And, yes, I know men can have children into their 90s, and perhaps Orly’s mom was Israeli or something, but… Anyway, he wins because of some fluke and in doing so has to figure out in a hurry how to be mayor of the US’ second-largest city. Hardy-har-har. That means dealing with snobby LA private school parents, weird special interest groups and, of course, the scourge of social media. There are jokes about him being out of touch with everyday life that tail off a bit after the first couple of episodes, and then it’s just kind of a joke of the week. Mostly the gag around Arpi Meskimen (Hunter) and her manic hippie putting together binders of ideas or reports whose acronyms spell out things like C.R.O.T.C.H. That’s not a real example, but probably funnier than the ones they actually came up with. It’s super sophomoric.

The supporting cast pretty much comprises the sum total of the people on the poster. Which is odd in and of itself. They are basically preening youngsters obsessed with Instagram and seemingly just self-interested in career advancement. Telling the remaining two characters — Mikaela (Vella Lovell) and Tommy (Mike Cabellon) — apart is actually kind of difficult. They’re just stereotypical young millennial types and are kind of interchangeable in their bitchiness and narcissism. Frankly, I don’t really understand their characters, and they don’t really do much for the show. They just feel very cardboard cutout, stand-in for a couple young people written by a couple of Gen Xers for Gen Xers. Which I can relate to, but also know a flat representation when I see it.

My understanding is that the show’s production schedule was cut short due to COVID, so I assume we’ll eventually get more than the nine episodes that have aired. And, look, I know that comedy is hard. Especially this type of “smart” joke machine gun type show that Fey and Carlock do. But I’m hoping they take the time off to retool a little bit and figure out what is missing from the heart of the show. You have Danson to build a show around, which is a total win. So it’s a matter of maybe hiring another couple ringers to support him. Expand the bullpen a little bit. Flesh it out with some comedy sitcom veterans to bolster the whole cast. And, maybe, think about sending Arpi (again, what’s with the names?) on a sabbatical to a sister city somewhere for the remainder of the season. She’s a disruptive factor, but not in a good way. Or maybe somehow move the show to NYC and just recast everyone with New York types, save Danson, Moynihan and Kenedy? I suppose we’ll see how they handle things, as I don’t get the sense the response has been overwhelmingly positive. Whatever the case, you know I’ll be watching.