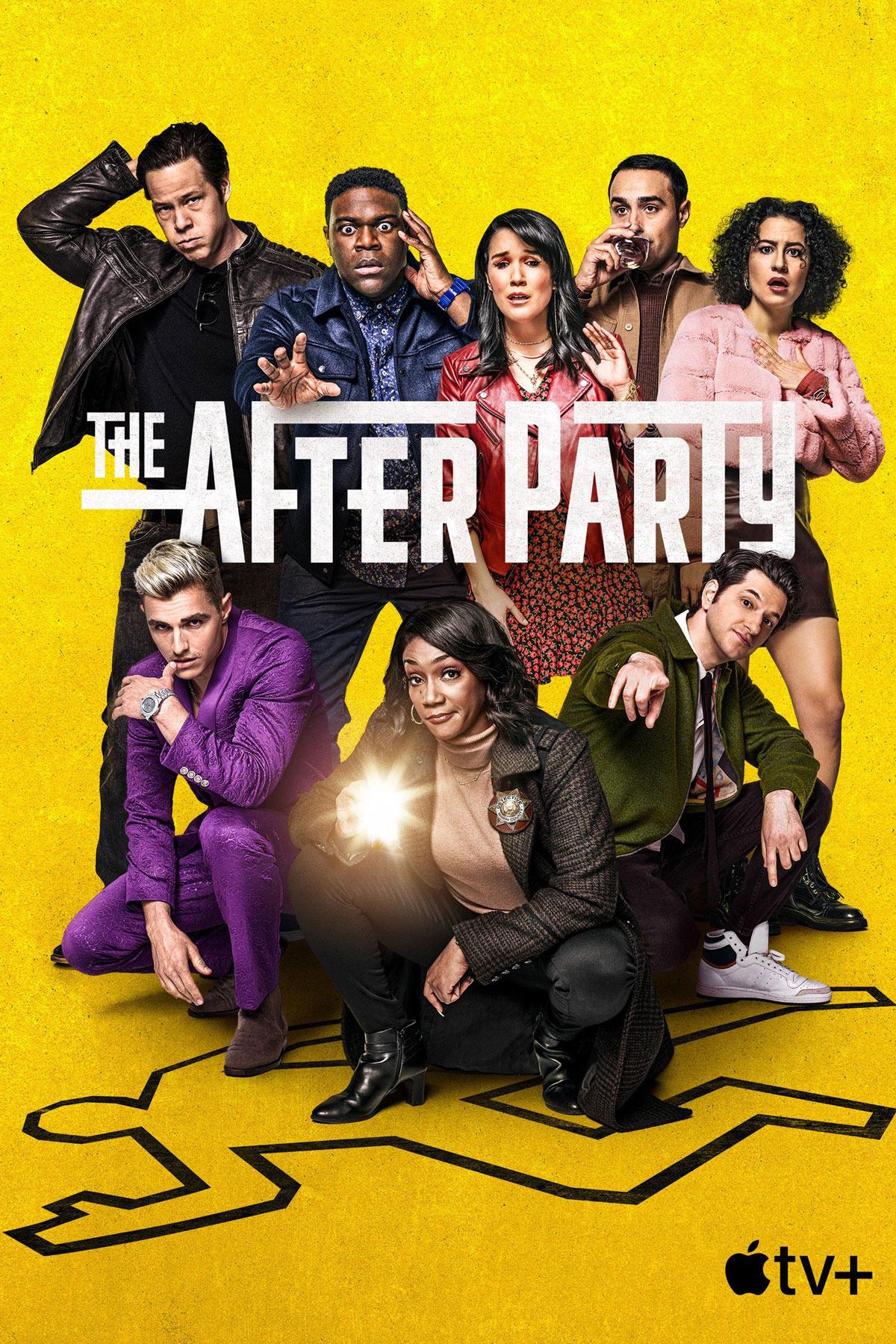 Frivolous. This show is frivolous. But, honestly, what scripted television isn’t? And as a person who is bombarded by pandemics and wars and people complaining about gas prices all day long on my TV, I think I deserve a goofy whodunnit filled with funny actors, whimsical genre switching and just overall fun. Because I’m a human who sometimes needs a break from the bleakness of the news and peak TV, which seems to almost always include true terribleness. Is The Afterparty going to change your life? Nah. Is it going to win awards and be touted as amazingly awesome by some stuffy critic behind a paywall? Probably not. But it will give you a weekly gaggle of laughs and make you remember that not everything has to be overly serious and/or overly stupid.

We all remember Clue, right? The movie, not the game. Okay, maybe you were a little young (or a fetus or not even an imagined human being) in 1985 when that one came out. How about Knives Out? That one was pretty much a more sophisticated, modern version of Clue and should be fresh enough in everyone’s memory to draw a parallel. Well, The Afterparty is a bit of a hybrid of the two, but in that classic ensemble, stick-everyone-in-one-place-in-order-to-solve-a-mystery filmed event. In this case, we have a group of high-school classmates who, after attending their reunion, go back to their famous classmate’s house for an afterparty. Said famous dude, Xavier (Dave Franco), ends up dead. Each of the party’s attendees has their motive, but it is up to Detective Danner (Tiffany Haddish) to lock them all down, get their story and figure out whodunnit before her boss shows up and yanks her off the case.

So, what does it take to make something like this successful? Welp, you first have to have a mystery worth hanging with. Honestly, in the case of a comedy whodunnit, that’s the least important of the important things, though. Mostly, you have to have compelling characters, all of whom are distinct from one another. After all, you’re going to be locked in a single location with them for the vast majority of the show, so you really need to have a cast that is both funny, interesting and unique. We start with the victim in this case: Xavier. He’s a dork, who is seemingly devoid of talent, but has somehow tapped into the zeitgeist with his bravado and purple suits. Dave Franco is perfect. He’s an obvious pipsqueak just posturing as a rock star. All of him is artifice and stagecraft. He’s the loser from high school who got lucky (or did he!?) and was in the right place at the right time. Who else would we want to see die?

Frankly, it seems like the majority of these characters were kind of dorks in high school. Ben Schwartz (Yasper), and his incredibly manic energy, is a great embodiment of the desperation of being left behind, but still fan-girling over his old ska band partner, Xavier. Sam Richardson (Aniq) finally gets to embody a non-dimwitted character, and actually play the ostensible straight-man lead in this ensemble. He even gets a love interest for the first time that I can recall. He’s always terrific and so deserves that. Filling in the cast is the always twitchy and always funny, Ike Barinholtz (Brett), and Ilana Glazer as the former valedictorian/loon and current disaster of a human, Chelsea. I wasn’t even aware I’d seen Zoe Chao (Zoë) before, but she brings great warmth to the show and kind of grounds it as one of the main characters in a way that humanizes what could otherwise be a wacky jokefest. There are other secondary characters, including Genevieve Angelson, who I think maybe says five words the entire show.

And then there’s Tiffany Haddish. Despite her being all over the place in the past five years, I still feel like I haven’t seen her much outside of her commercial work. Does she come off as a serious detective? Not at all. Does she emote in a way that you can imagine her doing Shakespeare? Nah, this ain’t that. But she has this very naturalistic way of acting where it really slots her in as the audience avatar in an amazing way. Her “aw damn” exclamations are our “aw damn” exclamations. She seems to be having a ton of fun being there. Just a ray of sunshine in every one of her scenes. She really sets the mood and gets you psyched to be there with these people that same way she seems psyched to be there. She’s excited and tickled by something someone says (even though she’s investigating a murder) and we feel the same way. She’s the glue, and is really terrific. The only person who holds a candle to her is child-actor, Everly Carganilla. Funny, I had just seen her in The Chair, where she was also amazing. There she played the adopted daughter of Sandra Oh, here the bio daughter of Barinholtz and Chao, Maggie. And like most of the main characters, she gets her “own” episode, which plays out like a sugared child’s movie. This girl has a very bright future.

The tale itself is told Rashomon style, so as to cause Detective Danner to have to take bits and pieces of each witness’ story to reconstruct what actually happened that lead to Xavier’s death. Although I suppose it’s not really Rashomon (the same exact story told differently depending on the person’s perception of it) as much as it is multiperspectivity. In other words, everyone kind of perceived the incidents in the same way-ish, but each character only has the part of the story to which they were party. So missing sections of one character’s telling are filled in by another, etc. So, in the end, Danner is able to piece together who the killer is by stringing together all the fragments she gets out of the witnesses she brings into a side room alone. The stylization of these different stories is where the show’s creators have fun. So we get some insight into the character’s brains based on the genre in which their story is characterized. It’s a total gimmick, of course, and completely self-aware television craft. But that doesn’t mean it’s not fun. Here’s who does what:

The show is funny and breezy and mixes it up enough with the genres and twists to keep things really moving along. It’s another example of an all-in-one-day show as well, which is tough to do over the span of eight episodes without boring people. Especially when you’re essentially telling the same story seven times. There is the one flashback bottle episode, which brings all these same characters back to high school, but otherwise it’s all the same day in two different locations. First the reunion party, then the afterparty. I have to say that watching all these 30-somethings play themselves in high school is pretty f’ing funny. Notice how I haven’t even complained that Barinholtz is clearly a decade older than most of his “classmates?” Which is totally something I’ve bumped on in past shows. Though aren’t Angelson and Glazer wondering if they’re supposed to be way older, or him way younger than he actually is? I suppose they meet in the middle, and everyone is supposed to be forty? Although it’s a 15th anniversary, so I suppose everyone is supposed to be around 33? Erm, yeah. No way. But I’ll let it go.

I know there is not much original with the narrative here, but I don’t think that matters a bit. Like I said up front, they’ve hit on a fun setup, a great cast and a script that just keeps things going. Enough so that Apple TV+ has already given the show a second season. I’m not certain what the format will be for a second go ’round. Perhaps we follow Danner on another case with another cast of funny people? Or perhaps we follow Aniq and his career as an escape room planner? Or perhaps we shoot 25 years in the future and get to hang with an adult version of Maggie at an afterparty for her 15th high school reunion? The possibilities are endless. But rest assured that I’l be watching, because I’m really into smart-dumb comedy now. It’s my [ska] jam.