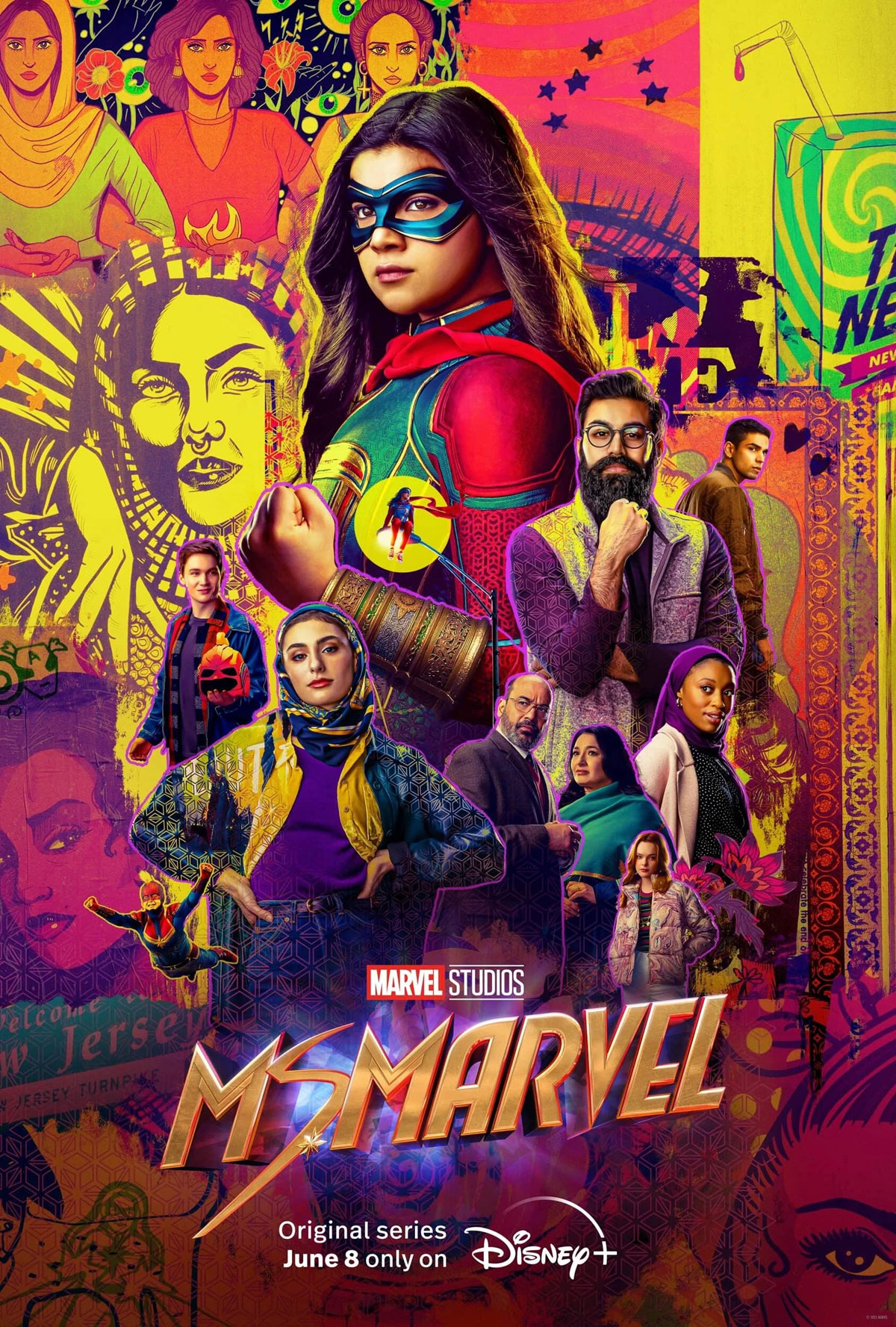 I swear I’m going to make this brief. Mostly because shows like Ms. Marvel aren’t made for me. It’s not that old, white guys can’t enjoy a nice superhero story about a young Pakistani-American girl in Jersey City whose familial bangle gives her the power to… Well, that’s my first complaint: what the heck are her actual powers? And it’s this kind of thing that makes me a terrible person to be reviewing what amounts to a young persons’ show. Or maybe I’m just a terrible person. It’s not that I can’t enjoy these things. It’s not as if I don’t enjoy these things. But there’s a reason they make teen shows. And a reason they make adult shows. This, more than any of the previous Disney+ Marvel shows falls into the former category. Which is fine. Just maybe not for me.

But, duh, you say. This is a show about a teenager. Thus the show is for teenagers. Dude, that’s like saying Three Men and a Baby was made for babies! Hold on, I’m being told that movie was about the three men, and that the baby was just a plot device to spur their psychological and emotion growth. Got it. My point is, I watched more than my share of iCarly and those Sams & Cats and Jessie with Hipster Jr. back in the day. And I enjoyed almost every minute of it. Although I couldn’t ever tell if Sam and Cat were like high school graduates at that point, or if they just dropped out or what? And I think Jesse was supposed to be an adult, but that was also a little unclear. My point is, there are shows made about teens for adolescents and teens that know themselves and know their audiences and kind of just do their thing. Ok, I don’t really have a point here other than maybe my television-watching brain was broken by too many years of viewing Nick and Disney Channel sitcoms with the two Hipster children.

But let’s get this out of the way up front. Kamala Khan (Iman Vellani) lives in Jersey City, NJ. She is your typical sixteen-year-old high schooler who does typical high school things. So much so that we start the show with her taking her driver’s test. Anybody see an issue here? Yes! The age at which you can first take a driver’s test in the state of New Jersey is seventeen. Did nobody Google that shit? Especially when this whole failing the driver’s test in the most spectacular fashion seems like a triggering event for the narrative and an ongoing joke throughout the show. All based on an oversight. Or just a damn lie! My second complaint is less a minor oversight and more of a case of just lazy writing. Or the writers just assuming teens won’t ask questions about gigantic plot holes. Here we go. A group of bad guys is captured by the fictional Department of Damage Control and brought to a Supermax prison presumably far away from the Jersey City neighborhood where most of the action happens. I feel like it’s like in the Pentagon, or in D.C. somewhere. Point is, instead of putting said bad guys through the front door of the Supermax — which is literally why Supermax prisons exist — they bring them through the basement or something with their arms cuffed to a steam pipe. And, of course, they get out of their chains, a fight ensues and then suddenly they’ve escaped and are back in Jersey. What the actual hell? Nothing about that makes sense. Why not use the Supermax as a Supermax? And is there some route from this basement to somewhere outside the prison? Not much of a prison. And then do they just pop up and thumb a ride from whatever isolated area they’re in without being spotted or stopped? Really, really dumb.

Man, I lied. I’m still typing about nothing. What can I tell you? The Asian representation is really nice to see. Especially the way they lean into the Pakistani culture of the lead character and her family. And, frankly, the entire neighborhood in which they live. It’s a colorful and joyous representation, but they also look back at the strife with India and some of the other historical nastiness between those two nations and the suffering of their people. But, again, it’s a kids’ show, so I’m sure they leave out the truly horrible stuff. Or even the medium horrible stuff. So the show’s makers go beyond the usual lip-service of hiring a POC, but then kind of ignoring the fact that person is what he or she is and just kind of treating the character like it’s another vanilla white person in the universe. I imagine folks with immigrant parents will relate to a lot of Kamala’s interactions with her overly caring parents, and American Muslims will most likely recognize some of the bias that the show alludes to. But, again, doesn’t go whole hog because kids. So, the idea of the series, the actors and the look and feel of the neighborhood is great.

What I wasn’t in love with, however, was the explanation and development of Kamala’s powers. They definitely tried to kind of toe the Spider-Man line, starting her off clumsy but determined with a power she can’t control or regulate. But, unlike Spider-Man, it’s not real clear why she has these powers, what they are and where they came from. I mean, we know she found this bangle in her great-grandmother’s stuff and it shoots like rainbow light or something. But that’s honestly it. The light can sometimes form giant hands. And she can step on it and do a stair thing like Q*bert. But that’s not terribly interesting. And how and why is that related to Pakistan and/or the seeming group of whatevers that her ancestor belonged to? Kamala also has this best friend friend, Bruno (Matt Lintz), who confuses me. He’s this orphan (I think) tech genius who is also close to Kamala’s parents and potentially in love with Kamala. But also her superpower trainer, protector and a guy who can somehow build these really complicated and presumably very expensive tech toys and gadgets in zero hours bankrolled with a minimum wage job. Which, as an orphan, also probably goes toward his rent? It feels like a guy they wanted to get some backstory on, but just kind of ran out the clock and left him as a mixture of a Lucious Fox and a Robin. Or like Q from James Bond. But without the means or the sidekick costume. Or the backing of the government.

Anyhow, the show starts off much stronger than it ends. It’s fun and funny and there’s a lot to look at when we’re first dropped in Kamala’s world. But the story quickly becomes complicated in a Neil Gaiman kind of way. But without the detail. So it gets kind of jumbled and less interesting when we’re watching the mystical stuff and getting away from the grounded Jersey City environment. It’s kind of like the complaint when Spider-Men gets away from the story of a normal high school student from Queens struggling to get/keep a girlfriend and foil muggings and put him in space or Atlantis or whatever the hell happens with him on the reg. Ms. Marvel is better as a neighborhood hero, and is how they pose her. And is the real heart of the narrative. I’d say stick to that. But the after-credits scene we’re presented with at the end of the series tells me that ain’t gonna be what they do. Also, I feel like perhaps they skimped on the CGI budget because, again, kids will be less judgmental about effects. It felt at time like perhaps they’d procured the crew from Disney XD. Which, if you’ve seen any of those shows, is not a compliment.