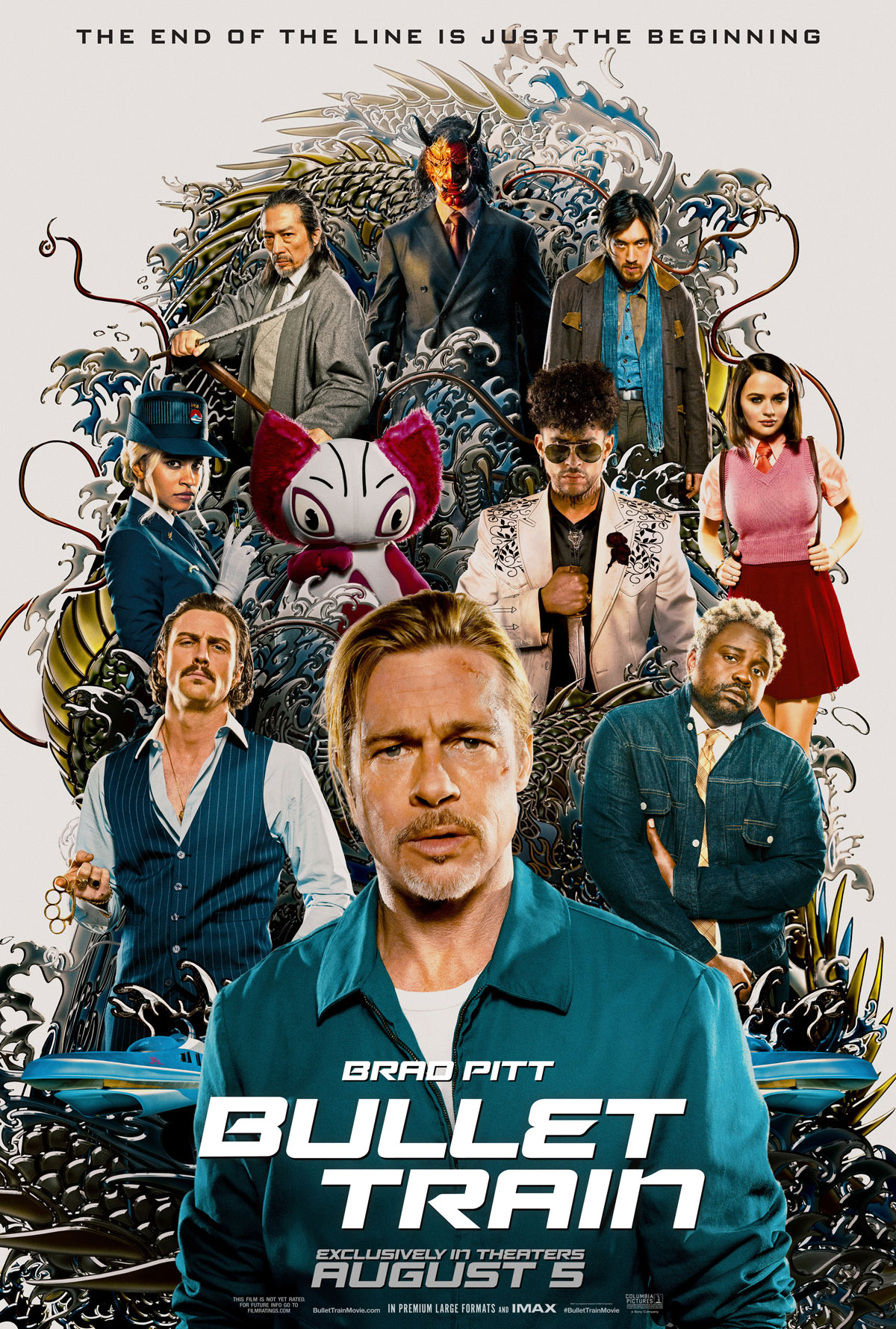 There was this awesome 1997 rhythm game for the original Playstation called PaRappa the Rapper. I’m pretty sure I rented it from Blockbuster and just enjoyed hours and hours of this weird hip-hop dog, who in one scenario trains with a dude named Chop Chop Master Onion and does this whole “Kick, punch, kick, kick, kick, punch!” thing. This movie is that. It’s a fever dream of bizarro action where an anthropomorphic dog does karate with a dude with a giant onion for a head. But only kind of. Because it has Brad Pitt in a bucket hat and Paperboy from Atlanta, Brian Tyree Henry, with a British accent. Don’t ask me which one of them has the onion head.

But, really, this is just a bonkers action film. And seems to be the type of thing that Pitt was put on the Earth to act in. Serious Brad Pitt is a drag. Romantic Brad Pitt is also just too on the nose. But put-upon action comedy Brad Pitt is a perfect use of his expressive face, physicality and just the Brad Pittness of him. And David Leitch — who directed things like Hobbs & Shaw, Atomic Blonde (which has one of my favorite fight scenes in recent memory), Deadpool 2 and even kinda, sorta John Wick — knows and understands what he has in his leading actors/actresses and plays into it perfectly. He puts pretty people in peril, has them get the shit kicked out of them, but also shows them as the pros they are, even if we get to laugh as they somehow miraculously skirt death. It’s a very specific thing, and this dude Leitch is really, really good at it. Really building on the early master of this hectic comedy-action genre (and one-time collaborator with Pitt in Snatch), Guy Ritchie.

Look, I knew this wasn’t going to be a cerebral endeavor. Though from the moment I saw the trailer for Bullet Train, I was on board. Ooof, sorry for that. There is a reason Jackie Chan was a huge star. People just love to see crazy stunts. And if you can mix those stunts with some one-liners and quips, even better. Because cartoonish violence is somehow just so much better than like violence-violence. And, man, does this film have it in spades. Is it morally fulfilling? Hell no. Are there any lessons to be learned? Yeah, not at all. Does the plot, or anything that happens in it really make any sense? Not really. But ask me if I care. You know, because usually I do. Hell, if I cared, I’d be out from moment one. Because this whole thing starts with some absolute nonsense. Two dudes, Lemon (David Tyree Henry) and Tangerine (Aaron Taylor-Johnson), transporting a briefcase for their boss on a — you guessed it — bullet train traveling across Japan. And these two numbskulls — who are supposed to be trained killers/couriers — leave the briefcase in the communal luggage pile between cars? Like they don’t have it chained to their wrist? Or at least sitting in their lap or under their seat? It’s a briefcase, dudes! Anyway, that’s some bullshit. And Brad Pitt’s character, Ladybug — who is hired to track down and abscond with the case — just walks up and takes it off a pile. Kinda weird. And there is plot, uh, looseness like this all over the place. Thing is, I don’t really care.

Because this shit is fun. It’s fun watching Brian Tyree Henry and his white British counterpart call themselves brothers. It’s fun to listen to Henry speak in a thick English accent. It’s a delight when Zazie Beetz (also of Atlanta) shows up to kick some ass and throw some snakes around. In fact, I feel like there is some deep Snakes on a Plane stuff going on here, but that’s probably just me. We also have both Bad Bunny and Michael Shannon show up as bad guys. Shannon as the big bad, remarkably a white Russian dude nicknamed The White Death, who is somehow the leader of a Japanese Yakuza gang. (I realize, of course, there will always only be one White Russian Dude, but that’s just a matter of language.) It’s all just camera craziness and stylized violence that is endlessly creative and fun. It’s brainless silliness and absolute anarchy. The vast majority of the action takes place on the — you guessed it — bullet train. Going from car to car filled with weirdo Japanese pop culture stuff, neon lights and shiny ephemera. It has some tinges of everything from Blade Runner to Snowpiercer. But with the attitude of Deadpool and The Suicide Squad.

And, yes, there is a plot. A nice, simple one that has just enough heart to it to make you care about these characters. Just that little bit of warmth to not make this a total and utter Roadrunner cartoon. My taste is so all over the place, it’s maddening. To me. To the algorithm. To my family, who I know don’t read this site. But I liked this. Because sometimes I just want to see shit fly around at high speeds. I don’t need an ornate jewel box of a film. I don’t need time travel or psychological nonsense from A24. Though I will almost always watch that… But some nights, a movie like Bullet Train is the perfect high in a time that needs exactly this type of joyous distraction.