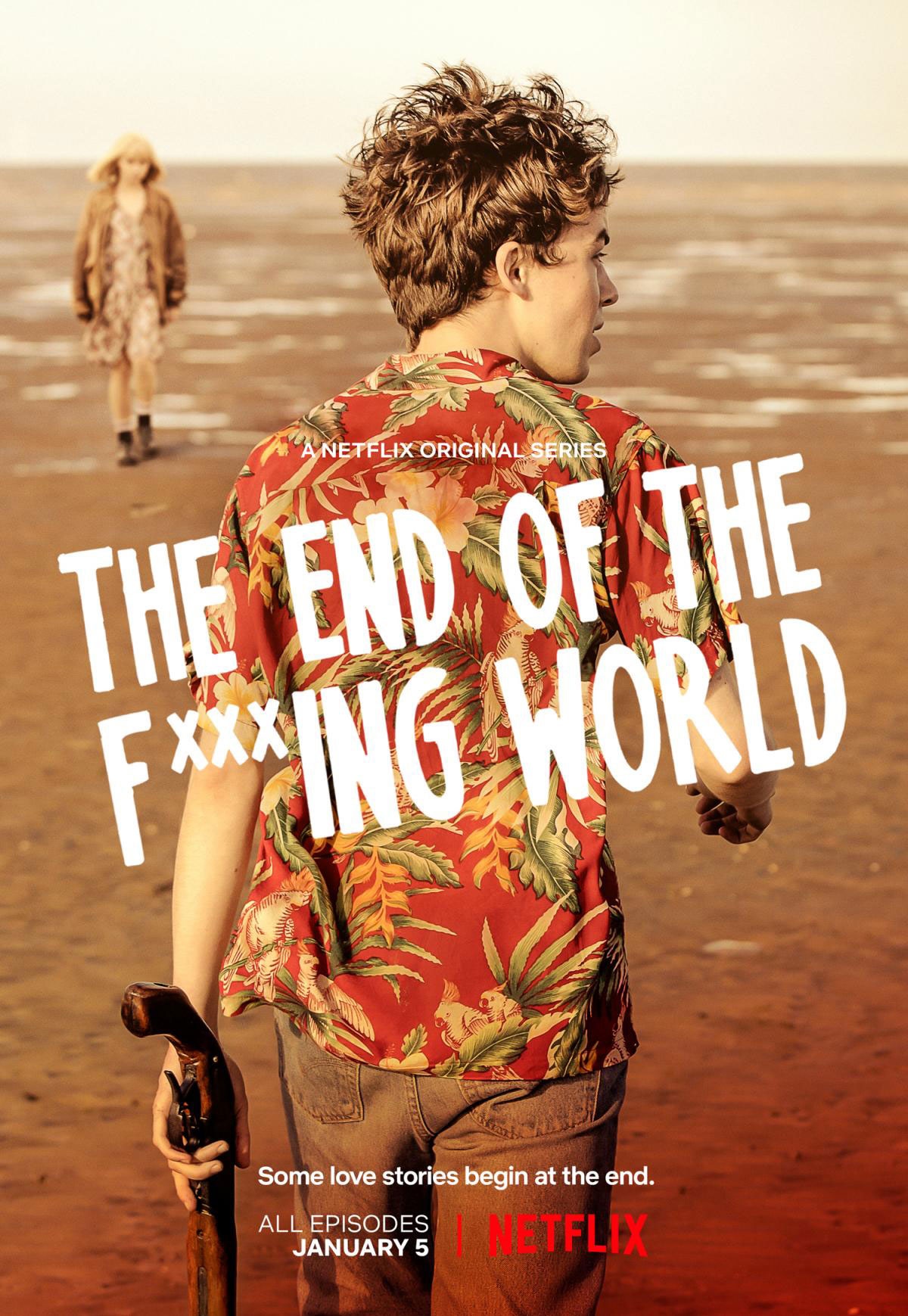 I know it’s called The End of the Fucking World, but I kept wanting to call it The Fucking End of the World. Maybe it’s because I’m super-American and this show is super-British, but most likely it’s because in Trump’s America I literally say “I swear, it’s the fucking end of the world” at least three times a day. Whew, I love that I get to swear in a review for a good reason this time, instead of just calling some character or actor an asshole or a douchebag. Thing is, nobody in this particular show is either. Instead, we have star-crossed teenage lovers who really wouldn’t be an attractive mate to anybody else but each other.

James is a self-diagnosed psychopath. Alyssa is the new girl at school who exhibits her own arsenal of anti-social behavior. In an American show they’d join up with an arsonist and a gang banger and form some sort of latter-day Breakfast Club where they all go through an anguished period of self-discovery and transcendence. But, mind you, this is an English show, so we have to go super-dark and absurd with it. So rather than James recognizing in Alyssa a kindred spirit, he sees the opportunity (because she seems to be the only one at his school that actually talks to him) to use his animal-killing hobby on his first human. He doesn’t seem to choose her because there’s anything specific about her other than opportunity. Of course it turns out to be much trickier to kill a human — especially one who ends up being a defiant, intriguing girl like Alyssa — than it was a rodent or a family pet.

Through perspective swings and flashbacks, we fill in James and Alyssa’s home lives and histories, both of which are comically dreary and/or creepy and just terrifically British. We also learn that despite James thinking that perhaps he’s the one with a chip missing, that perhaps it’s Alyssa who is the way bigger wild card. Through conversation, they come to the realization that they are both dissatisfied with their lives and, playing along at first, James just kind of goes with Alyssa’s plan to run away from their boring-ass town. After all, his intention to murder her is still in play, so he’s just yessing her in order to get her alone in order to make his murder plan easier. Her goal, she’s decided, is to find her estranged dad, reconcile with him and live happily ever after. Her enthusiasm for this plan is based on his lovely birthday cards that he sends her every year. A very seventeen-year-old plan. In fact, it’s more like something a ten-year-old would dream up, showing us that Alyssa is clearly emotionally stunted. Again, James agrees to everything (including stealing his dad’s car) because he thinks this is going to be a really short adventure, as he’s just going to kill her as soon as they’re away from their folks.

But plans change when it’s clear that killing a squirrel is easier than killing a human — especially one with Alyssa’s aggressive and intriguing energy. It seems James starts to unconsciously move away from his murder plans as his suburban boredom morphs into feelings for his Bonnie and Clyde partner in crime. Perhaps he isn’t, in fact, a psychopath, but a bored suburban teen with seriously suppressed emotions from a life-changing trauma he suffered years ago… James isn’t necessarily that self-aware, but we can see the change in him, as he lets his guard down (in an awesome scene where the two teens dance in an empty house they’ve broken into) and starts to soften in front of our eyes. But then murder thrusts itself on James and turns the duo into true outlaws. For some reason their situation brought to mind True Romance and Wild at Heart, but that may have mostly been because they were also darkly comic road adventures that involved criminal activity perpetrated by a dude in a Hawaiian shirt. (And, yes, I know I’m conflating Nicolas Cage’s weird, snakeskin jacket in the latter with his Hawaiian shirt in Raising Arizona, but at least they’re in the same comic universe.) Granted, these two kids are not hardened criminals and their outlawishness is circumstantial and not necessarily pre-meditated and inevitable. They’re just two ultimately sweet kids whose lives had no other choice than to lead to the end of the fucking world.

I don’t want to give too much away, so I won’t go into great plot detail, but there is a shocking amount of layered emotion in a show that runs eight episodes that average probably 20 minutes each. It’s breezy, funny, grounded and sweet at the same time. It manages to balance the emotion and screen-time between the two characters in a really balanced way and, unlike so many of our modern series, manages to display innocence in its characters in a realistic manner that then doesn’t feel the need to rip it away just for shock value. In other words, despite the characters outward display of violence, nihilism and little care for other humans outside of themselves, the show’s creators don’t punish them in cruel ways that characters seem to be punished on most critical television these days. These are teenagers, after all, and this is on the surface a very dark comedy (though, again, in a cheeky British way) so perhaps — despite its seemingly bad-news, cliff-hanger ending — we don’t have to escalate the bleak at the end of every single modern program. We’re humans and sometimes we deserve a character arc that leaves us feeling a little better about the fucking world.