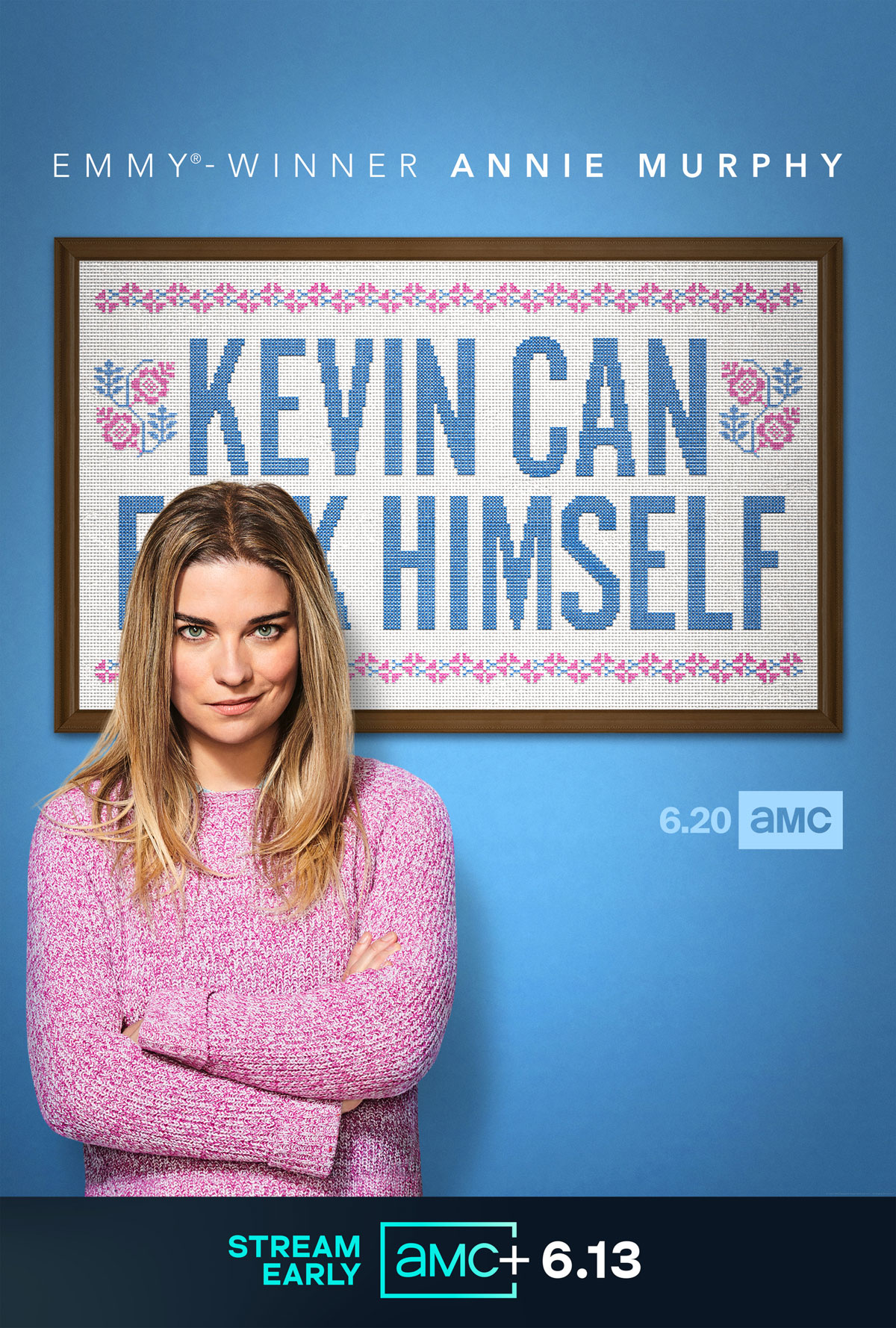 Kevin Can F**k Himself: Season 1

God loves a high-concept sitcom. Especially when said sitcom has the word “fuck” in the title. Even if Kevin Can Fuck Himself chooses to censor such a lovely term. Although this high concept includes completely breaking the fourth wall of the sitcom genre, throwing us into the very real, dreary world of Worcester, MA. Because the sitcom trope of the self-absorbed, loutish lunkhead married to the put-upon, way-too-hot-for-him wife is a thing. And there must be repercussions. Must be!

In this particular sitcom, we have your typical beer-guzzling shitbag, Kevin (Eric Petersen). He loves the Red Sox and the Patriots and would totally “do” Tom Brady if he could. He works some drone-ish job for the cable company and fancies himself a genius and real cut-up. In fact he’s kind of a weird-looking loser. Of course. And then there’s his reserved wife, Allison (Annie Murphy), who is the butt of all of his jokes and essentially exists to clean up his messes. He forgets birthdays and anniversaries and spends their savings on dumb sports memorabilia. He is dismissive and asinine and a complete drunken jackass. So, typical sitcom dude just there for the laughs and to set up the weekly “situations.”

We’ve all seen these sitcoms before. You first question is why this attractive woman would be married to this fat idiot. Check. And secondly, why she would put up with this fat idiot continuously coming up with hair-brained ideas that always end in catastrophe, failing to appreciate her in even the tiniest way and mentally abusing her by constantly belittling her intelligence, career or anything else that is ironically his biggest short-fall. And because we’re just used to this being what sitcoms were, we laugh along with it — and at her misfortune. So what happens when that same woman walks into the other room, away from the multi-camera setup? Well, she feels all the things a normal person would feel being put in these situations. It’s not the hands-on-hips, tsk-tsk eyeroll that is the typical sitcom-wife reaction. Or the furrowed brow, followed by the “Oh, you big lug!” and a kiss on the cheek. Nope, Kevin Can Fuck Himself shows you how Allison would really react should these situations exist in real life.

Turns out the response would be to be really sad and, ultimately, pissed. The show, when in sitcom mode, is your typical multi-cam, brightly-lit set. And then when we go to the “real” world, switches over to a much more drab, single-cam look. Included in the cast is, of course, the chair-sitting, old-school misogynistic father-in-law (Brian Howe) and the wacky/dumbass next-door neighbor, Neil (Alex Bonifer), who is also Kevin’s best friend. Unexpectedly pulled into Allison’s “real” world is Neil’s sister and seeming adversary, Patty (Mary Hollis Inboden). She is the only other woman in the multi-cam, sitcom cast and initially plays as just another one of the boys to pile on Allison. But something in that relationship eventually breaks, and she finds herself sympathetic to Allison’s plight as the wife of asshole Kevin.

And this leads to Patty being a co-conspirator in the plan to kill Kevin. Yes, Allison — who has clearly broken inside after years of being the scripted punchline and always being on the losing end of the losers — decides her only way out is for Kevin to die. Because she, like us, knows that despite Kevin being a complete moron, the sitcom dude always comes out on top in the end… situationally. So, this simple plot becomes the push and pull of the show, oscillating between the “situation” of the week (the big boss is coming over, Kevin is running for office, Kevin forgets their anniversary, etc.), shown in multi-cam and the background single-cam plotting with Allison and Patty to murder Kevin. Conceptually, it’s really smart.

What’s also smart is that they lean on the concept, and don’t overcomplicate the plot. This isn’t The Sting. These ladies aren’t Ocean’s Eleven. They’re blue-collar women from Worcester, MA. The accents tell us that, but they also keep it super-Masshole. Their planning is exactly how you’d expect a couple novices to plan a murder. Find a local scumbag, tentatively offer him what amounts to not a ton of money to have him off your husband and then worry that hiring an unstable idiot to commit murder in your name might be a bad idea. It’s all more realistic than those shows where regular people all of a sudden know how to plan the perfect murder — twist ending and all. Anyway, nobody here is a genius. It all feels as it should.

With the concept on lock, the simple plot laid out, you have nothing but writing and acting to propel you through. And, surprisingly, Annie Murphy is really good. Not that Schitt’s Creek didn’t give us faith, but that role is pretty one-note. She is asked to do a lot here. Physical humor, broad humor, emotional stuff, anger… You get the point; she’s asked to really pull on all areas of her ability. And she does it all with what seems to me (as a person with “no” accent) in a perfect Boston-y accent. I mean it dips and and out a little bit, but she really sells the bedraggled, working-class girl thing. Right on par with her is what amounts to almost a female co-lead in Inboden. She definitely has that Rosie O’Donnell energy. And her role, while seemingly secondary, ends up the most critical in the entire show. In fact, the whole series becomes more about the two women’s friendship (seemingly the only one for each of them) than Allison’s relationship with Kevin. It comes off as genuine, which is due in big part to the strength and eventual warming of Patty’s character. Something that Inboden does amazingly well; somehow being both intimidating and vulnerable at the same time.

The series did wander a little at times, and veered toward overcomplicating itself, but generally came back from the precipice to focus on what is important for the show and for the characters. They did leave the thing on a bit of a cliffhanger, so it’ll be interesting to see how they continue the concept in season two. Frankly, I think it’ll be a challenge, but I’m hoping they’re up to it. I’ll definitely tune in.