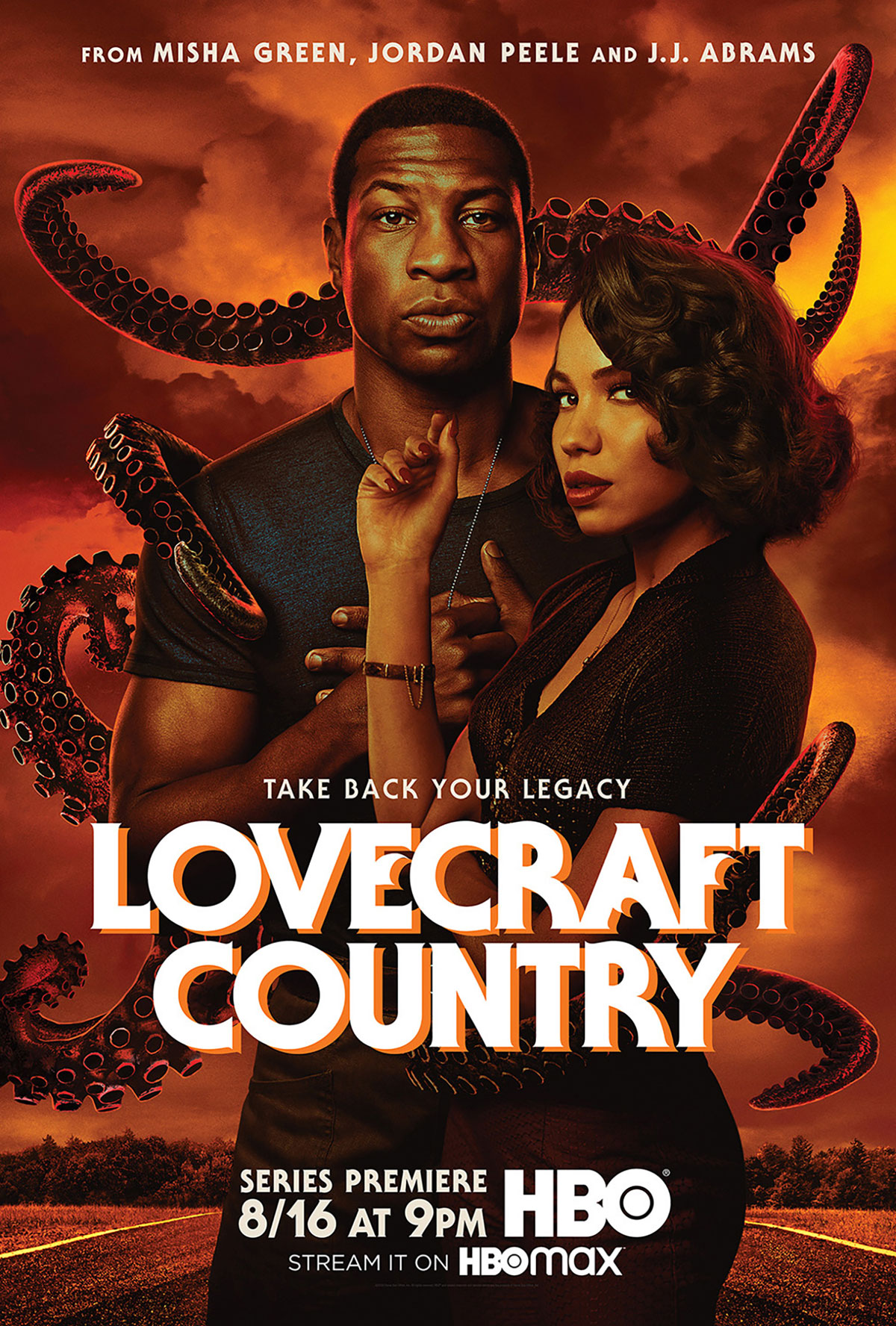 I gotta say that Lovecraft Country is kind of bonkers. I figured it would be another one of these psychological horror series where most of the terror was in the characters’ minds. Where we’d cut away from the gore and be left to imagine what happened after the camera swung away from the action. But, no, we are treated to all manner of graphic violence and CGI disgustingness in this series that does fulfill the whole “the horror is just a metaphor for something traumatic and scarring.” In this case the black experience in Jim Crow America. And if horror isn’t your bag, it also offers some sci-fi, tons of occult, monsters and lots of social commentary.

Trying to summarize this series in two sentences or less is next to impossible. But we essentially drop in on the lives of an extended black family in 1950s Chicago. One, Atticus (Jonathan Majors), is a Korean War vet coming back to the neighborhood after his service. And another is his childhood friend, Leti (Jurnee Smollett). There a missing father, Montrose (Michael Kenneth Williams), an uncle, George (Courtney B. Vance) and his wife, Hippolyta (Aunjanue Ellis) and daughter, Diana (Jada Harris). And Leti’s sister, Ruby (Wunmi Mosaku). I think that essentially covers that little group. They go on an adventure and figure out there’s this insane cult-like group of white folks who do magic and stuff and that Atticus, who is black, is the last of this family of the leaders of this group.

What initially feels like a tale of class, race and a creeping feeling of dread that sits over the experience quickly turns into a tale of monsters, magic and gore. It’s quite jarring, honestly. I suppose I should have expected it, but I didn’t quite have the idea that giant sharp-toothed creatures would jump from the earth to tear apart a group of racist, redneck cops. And that there would be resurrection and shape-shifting and lots and lots of spell casting. At its core, Lovecraft Country is a really nerdy show. Albeit one with lots of sex and blood.

Again, it’s tough to explain what the heck happens in this series, other than to say Atticus spends most of his time trying to reclaim his history. The great grandson (or thereabouts) of this grand wizard of this cultish group of followers of magic and one of his housekeepers (whom he presumably raped), his lineage is obviously a complicated one. But one that affords him some power in this heretofore all white society of secretive magic people. There’s some big, old book of spells that plays into it. And a creepy blonde lady who is trying to take control of the society and become immortal. Or something. That story is all a bit of a mess, truth be told. The side stories of Hippolyta and the multiverse (which is told as a bit of a bottle episode in “I Am”) is relatively fascinating and actually pretty affecting. As she is allowed to be whoever she chooses to be, free of being a black woman in the 50s, or just a wife or just a mother. It told the most cohesive tale and looked great, even if the whole multiverse thing is played out and didn’t make much sense in the context of the series or in any sense of scientific reality. Atticus and Leti also seemingly time travel, though that too was maybe, kinda a multiverse thing, but they conflate them. Which, again, is kind of a shrug in terms of the continuity of the storytelling.

Ultimately the whole affair felt a little schizophrenic. I understand the thing is supposed to be an allegory, but it felt like the creators fell in love with some of the CGI horror/gore a little too much and got away from some of the more emotional notes. They have a really solid cast and could have leaned into some of the quieter parts of the show if they wanted to, but everything always seemed to be at top volume. There’s no loud-quiet-loud dynamic. Instead it just seems like the thing is screaming at us the entire time. They clearly told Jonathan Majors to dial it the hell up. The guy emotes like nobody I’ve seen. His face scrunching, tears shooting out of his eyes, his jaw and arm muscles constantly clenching. The dude is intense. I only wish they’d allowed him to be a bit more subtle. Same goes for Michael Kenneth Williams, who plays his father. Everything is just turned up with strange bolts of testosterone. The women in the show are allowed a little more room to not be angry and violent. Jurnee Smollett, who I had no idea has been acting regularly since she was a child (and I probably saw on Full House, Cosby and True Blood by had no idea) is terrific and really compelling to watch. She’s allowed a bit more in terms of emotional variance, but is also asked to do a lot of physical acting and throwing herself around. Wunmi Mosaku and Aunjanue L. Ellis really get the most to do. Mostly because they’re not always running around being chased by bad guys or, you know, stabbing people. At least not right away. But their characters, Ruby and Hippolyta, seem to be the emotional center of the show. I just wish there was more of that and less horror craziness.

That all said, despite the convoluted narrative, which more than once involves seemingly random and non-essential people jumping in the same car to go on a trip that has no right happening, I did have fun watching the show. It’s difficult for me to ignore some of the egregious continuity problems where characters seem to be able to teleport to get from place to place despite driving an old-ass car, but the series is such an overwhelming attack on the senses that these little details are quickly blown away by another gross or shocking thing that befalls a character. I won’t even mention the bizarro Korean fox demon thing that former Real World: San Diego contestant, Jamie Chung, conjures up out of every bodily orifice. Well, she doesn’t conjure it, the digital special effects team does, but it’s just real weird and absolutely disturbing. And there’s a scene that felt very Pirates of the Caribbean to me as well. Or maybe it was The Goonies. In retrospect, it’s a really bizarre show. But certainly one that will keep you on your toes if you can take the site of someone sloughing off their skin and sinew while in flagrante, or a demon making a dude explode while also doin’ it. I believe there’s also a scene where a guy, whose head has been Frankensteined onto someone else’s torso, loses his nipples as his guts shoot out of them. Though, to be fair, he is a super-racist magical cop. Social justice!

Anyhow, there is enough good stuff in this series to make it worth a watch. I just wish they’d focused more on some of the allegorical race narrative and less on trying to make us barf or nerd out with mysticism. It’s not often that you see a show like this throw the kitchen sink of horror, mystery, social commentary, fantasy, time travel, sci-fi, monsters, sex and wizard shit all in one ten-episode series. It’s so much. So much. But it’s a big swing, which makes you feel like at least you got your money’s worth.