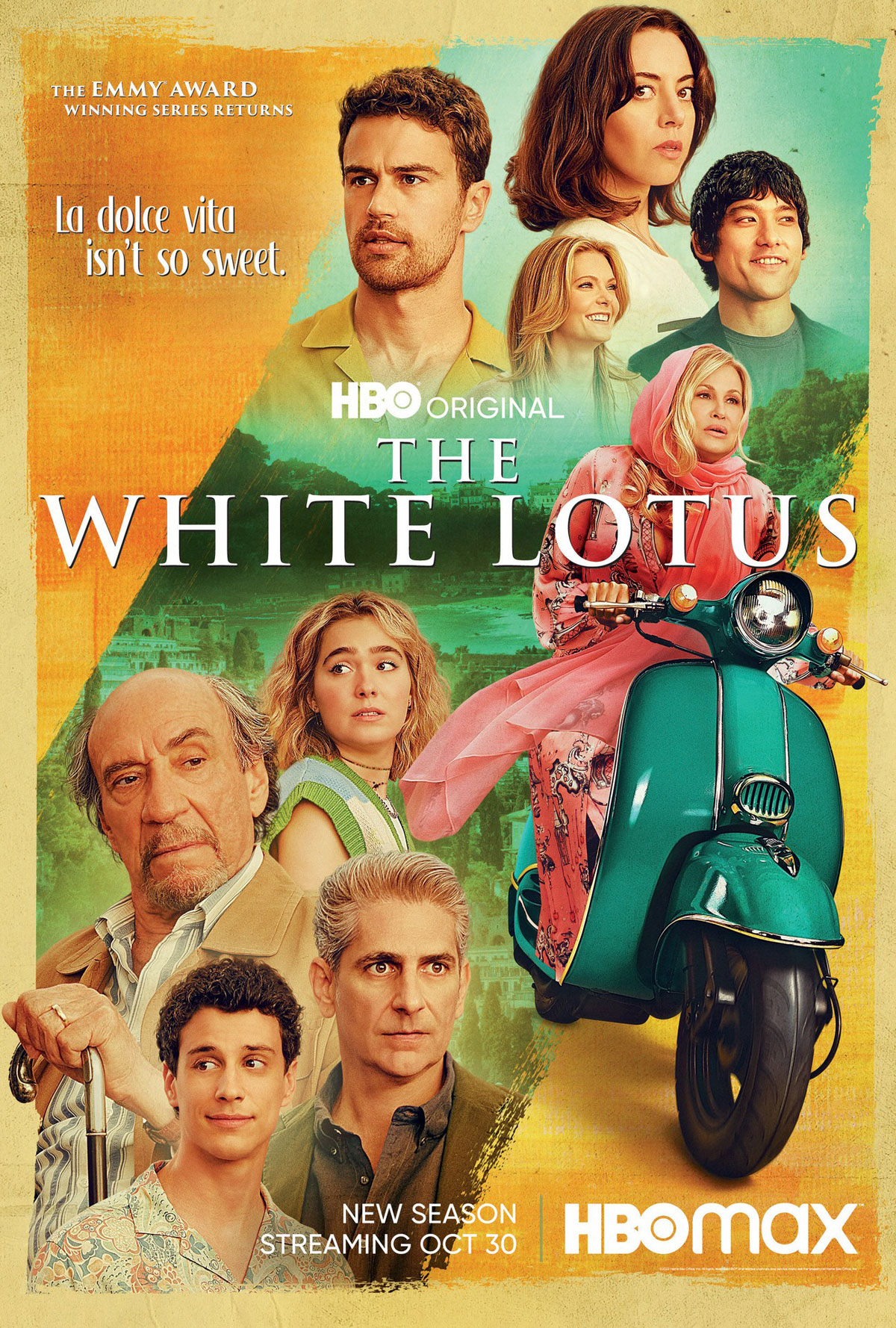 What can I possibly add to the White Lotus discourse at this point? I mean this is your critic’s favorite show of 2022. This is your aunt’s favorite show. Heck, this might even be your favorite show. And I’m sure it’s been written about, podded about and discussed ad nauseam. But, you know what? Good. It’s about time we had a water cooler, weekly program from HBO that didn’t involve dragons and shit. I imagine that the word-of-mouth about the the first season — along with some awards — gave this season a boost that didn’t really exist when the first season spun up. So season two came with some expectations. I’m not certain what those were per se, but perhaps it was more anticipation than expectation. After all, Mike White isn’t necessarily one to do the expected.

The first thing we get in season two is location, location, location. This breathtaking Sicily locale is just stunning. Not quite enough to distract from the drama unfolding at yet another White Lotus property, but… Yet again we start the show with a dead body. Or bodies. And then are brought into the main timeline that starts a week earlier. So we have a week with this new group of characters before at least one of them dies. Presumably. We know who doesn’t die because we see them in the first scene, but otherwise anyone is game. Like season one, the mystery seems like more of a background item, however. I mean it was always in my head, and White plays with us by throwing up chaff and red herrings in what just feels like him having a laugh at our expense. Because, ultimately, I don’t think he really cares about the dead bodies. He cares about the human interactions and relationships and power dynamics. But if he can mess with us a little bit (and probably satisfy some HBO honcho) by throwing in a murder mystery as a redirect, why not?

My first question: are there no decent American actors in Hollywood? Why do these distinctly American males need be played by Brits? Theo James (Cameron Sullivan) and Will Sharpe (Ethan Spiller) play ex-college roommates on vacation with their wives. Both James and Sharpe are British. I was honestly not familiar with either actor, but James is very obviously not American. His teeth and an occasional accent slip give him away. It’s distracting. Sharpe is less obvious, but he kind of mumbles and face-acts his way through most of the show. Anyway, it’s just weird there were no good American options to play the incredibly bro-ey money dude, Cameron. Or the nerdy tech entrepreneur, Ethan. Though a nerdy tech entrepreneur who has a six-pack and looks like he may play some sort of professional sport. Paired with American actresses, Meghann Fahy and the always-dour Aubrey Plaza, they make for the most compelling storyline in the season. I have a few quibbles with the Ethan character (or maybe Sharpe’s depiction of him) and Plaza plays to type, but the power dynamic and what makes for a good marriage is clearly an area that White poured a lot of thought into.

The only returners from season one are Jennifer Coolidge and Jon Gries as Tanya and her put-upon husband, Greg. Greg bails relatively early on after some broad comedy scenes that seem out of place in this sharp series. I can’t explain it, but was happy when Coolidge and her character are toned down a bit after his departure and actually comes around to be one of the best parts of the season. Coolidge is like the ODB of actors. She’s great to come in and guest on your track for a couple of bars — and you’re psyched to see her — but a whole album of just her is a lot. Accompanying her on the trip is her personal assistant, Portia (Haley Lu Richardson). Our representative wanderlust-y Gen Zer. In contrast to Albie (Adam DiMarco), our overachieving “woke” son-of-privilege Zoomer. It’s all about contrast.

It’s tough to summarize the narrative here, as each person or group in the ensemble cast has their own journey. But everyone is set up in this posh resort in this amazing locale in one way or another. Even the two local young ladies — one of whom is a sex worker and the other an aspiring singer who also is like a part-time sex worker — filter through this hotel. Weirdly, all the characters seem to eat dinner at the resort hotel every night despite the fact they’re in what I imagine is a pretty incredible place to eat out. I don’t know if that’s a commentary on the lack of curiosity in the idle rich, or if it was a production limitation, but it is one of those things that felt off to me. It made this series feel at times like a stage play and not a premium HBO, big-money production.

But, ultimately, the show isn’t about pasta. It’s about characters and interactions. And that can only be good and feel right if the writing is good and the people delivering the lines are believable. On that front, things are good. The writing is naturalistic and White clearly thinks about how things are going to sound coming out of actual human beings’ mouths. The people all feel familiar. Or, if not familiar, at least someone you could imagine living in this world. He also believes in feints. Or not giving you what you expect. Because we always expect deception and for nobody to be what they seem to be. But with White often times Occam’s razor is the norm. Albie seems like this beta male, overeducated politically correct dork. And the whole time you’re thinking that there’s some underlying evil shit going on with him that will eventually come out. Because of course there will be. But, no, White isn’t going to do that. He’s exactly what he appears to be. And this is repeated with all the characters for the most part. The womanizing sleazebag dude is, in fact, a womanizing sleazebag. Michael Imperioli’s entitled, damaged character is just an entitled, damaged dude. Not evil. Not homicidal. Just a sad, sex-addict fuck up. And his father, Burt (F. Murray Abraham), has some of the best lines in the whole show, but is just an old guy with some very old-fashioned ideas about the ladies. Which is what he is. Not some mastermind. Not an undercover rapist. Nope, just an old sexist jag.

White manages to bring all of this together in a unique way that feels pretty effortless. He gives all the intwined storylines equal time. While the murder mystery chugs under the surface. After all, everyone seemingly has a motive to kill someone else. Some reasons better than others. There is tension, but nothing that feels too forced. He even builds in some contradictions — especially in the relationships between Tanya and her newfound gay posse — that would normally feel like continuity problems in a TV series, but in fact end up feeling more like human nature. It’s not exactly freeform jazz or anything, but also doesn’t fall into some of the trope-y traps that so many other series do. Perhaps it’s because it’s so low concept compared to most everything these days. There is no time travel or real mystery box. There’s no multiverse or magical realism or multiple personalities. Or identical twin surprises. Nope, it’s just a bunch of messed up people hanging out in luxury in Italy.

It’ll be interesting to see how White follows this up. I was thinking prequel to the action in season one. But that would be probably too complicated. I believe he mentioned the next one would take place in Asia. Which could be cool. But I imagine that if people keep dying at White Lotus properties that there will be some sort of inquiry and put a season four in jeopardy. Whatever the case, he has solved in large part how to do an ensemble piece without dead-ending poorly developed storylines or just having some of them trail off. No, all of the tendrils of this adventure get a good amount of attention, and none suffer from him just getting bored and letting one or two of them atrophy. It’s a complicated dance, I’m sure. There were also some star-making turns in this show, including Haley Lu Richardson and her British bro-hunk, Leo Woodall. I’ve no idea if the Italian ladies — the two young ones and the older concierge — act in many American productions, but I imagine they’ll be on the short list if there is call for Italians in any open roles. And, let me tell, you will not be able to book a vacation to Sicily for the next four years. Damn you, Mike White.