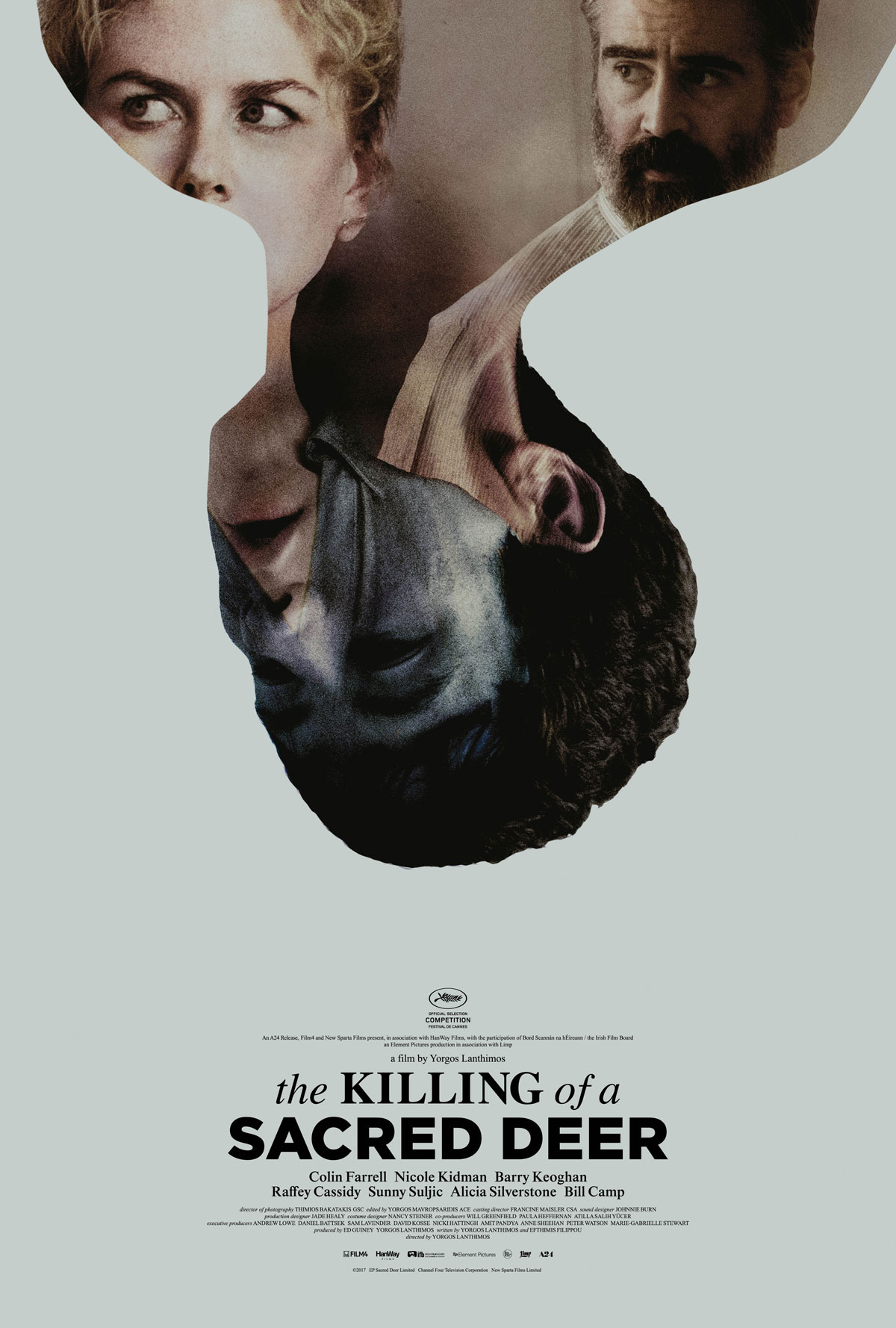 The Killing of a Sacred Deer

Oh my lord. Yorgos, what the hell are you doing to me? I watched The Lobster. And boy if that wasn’t one fucked up film. Stylized within an inch of its life, but just plain bizarre. The Killing of a Sacred Deer manages to somehow up the ante. It’s stilted and awkward and quiet in a disturbing-ass way. It’s not as surreal as The Lobster, but the characters in it are somehow even less real. Less human. But also more human in a really intense way.

Gah. It’s really almost impossible to explain a Yorgos Lanthimos film without experiencing it yourself. I’ve never done heroin, but I imagine this movie is what that drug feels like. And now I understand why people love opioids! Colin Farrell (Steven Murphy), a supposedly successful heart surgeon, acts as if he’s been lobotomized. Barry Keoghan (who, like Farrell, is also covering a thick Irish accent) is maybe one half step above Raymond Babbitt. Nicole Kidman seems like she’s been dipping into the pain killers, and even their children, Kim and Bob (which are odd names for modern-day kids), come off as if there’s a slow carbon monoxide leak in the house. There is this pall over everything in the movie, as though a fog has settled over the proceedings and we’re peering at this family’s life in some sort of dream state. It’s a super-odd choice, but one that is obviously intentional — but incredibly off-putting if you’re not expecting it or don’t ever just kind of just go with it.

There’s also the tenor of the film. It’s this dreamy, but stilted, stage play of sorts that sets up the Murphy family as your typical nuclear, upper-class family. But through music and just the grinding pace and acting builds this undercurrent of dread that isn’t exactly voiced right out of the gate. We know that Steven and this teenage boy, Martin, have some sort of relationship that initially casts Steven in a sympathetic light, but we soon find out that through incompetence or some other alcohol-induced screw up that Martin holds him responsible for his father’s death. Here the director and writer kind of play it coy and don’t really let on whether Martin is just a child and is mistaken in his assumption and Steven just feels sorry for him (meeting with him and buying him gifts) or if there’s something darker here and Steven is essentially buying his silence and lying to absolutely everyone.

Whatever the case, Martin (who, again, is so amazingly odd) decides that the best way to really do things is an old-fashioned eye for an eye. He blames Steven for his father’s death, so he will, in what he feels is just retribution, take one of Steven’s family members. Thing is, he gives Steven a Sophie’s Choice of sorts, saying that Steven can actually choose to kill one of either of his children or his wife and save them all from dying from this weird voodoo that he somehow inflicts on them where they lose the use of their legs, and then refuse food and then bleed from the eyes and then die. It seems like real, old-school Greek god or biblical shit. Which it actually is, considering the story of the film itself is based on something from The Iliad (I think).

The rest of the film is spent watching Steven and his wife, Anna (Kidman), wrestle with how to care for their dying children, outsmart or intimidate Martin and come to terms with the fact that the stupid shit Steven did has put them all in this pickle. There is a super-creepy scene that involves Farrell and Martin’s mom (played by Alicia Silverstone of all people) and some equally creepy scenes with Martin and Farrell’s daughter, who has fallen for Martin, who is clearly a complete sociopath. Albeit a sociopath with magical powers. Or what we have to assume are magical powers, because there doesn’t seem to be any other way for him to be pulling off the slow murder of the Murphy family. At first I figured he put something in their food, or stuck with some weird pathogen from some place, but he can seemingly turn the progression of the disease (or whatever it is) on and off. Which would indicate magic. So, that’s super weird and not something I’m apparently allowed to complain about. Because you know I don’t love the whole “he has powers” thing where those aren’t explained or at least some attempt made to put context around it. But in this case, I’m just going with it.

Whatever the case, Lanthimos makes movies where he doesn’t exactly lay out the morality in a straight line. It’s not clear at all whose side we’re supposed to take or assign blame or motivation based on a certain set of values that he espouses. Instead, he just puts out these morally grey tales, where both sides are generally virtuous and terribly flawed and lets us make up our minds who we think has the high ground. And this is, in essence, what makes his films so fascinating. I mean that and the look and feel of the things that is unlike anything else you’ll see. This one definitely is not for everyone (or most, quite honestly), but if you have a couple hours to dedicate to something that will stick with you multiple times that length afterwards, this is one that you should definitely check out.