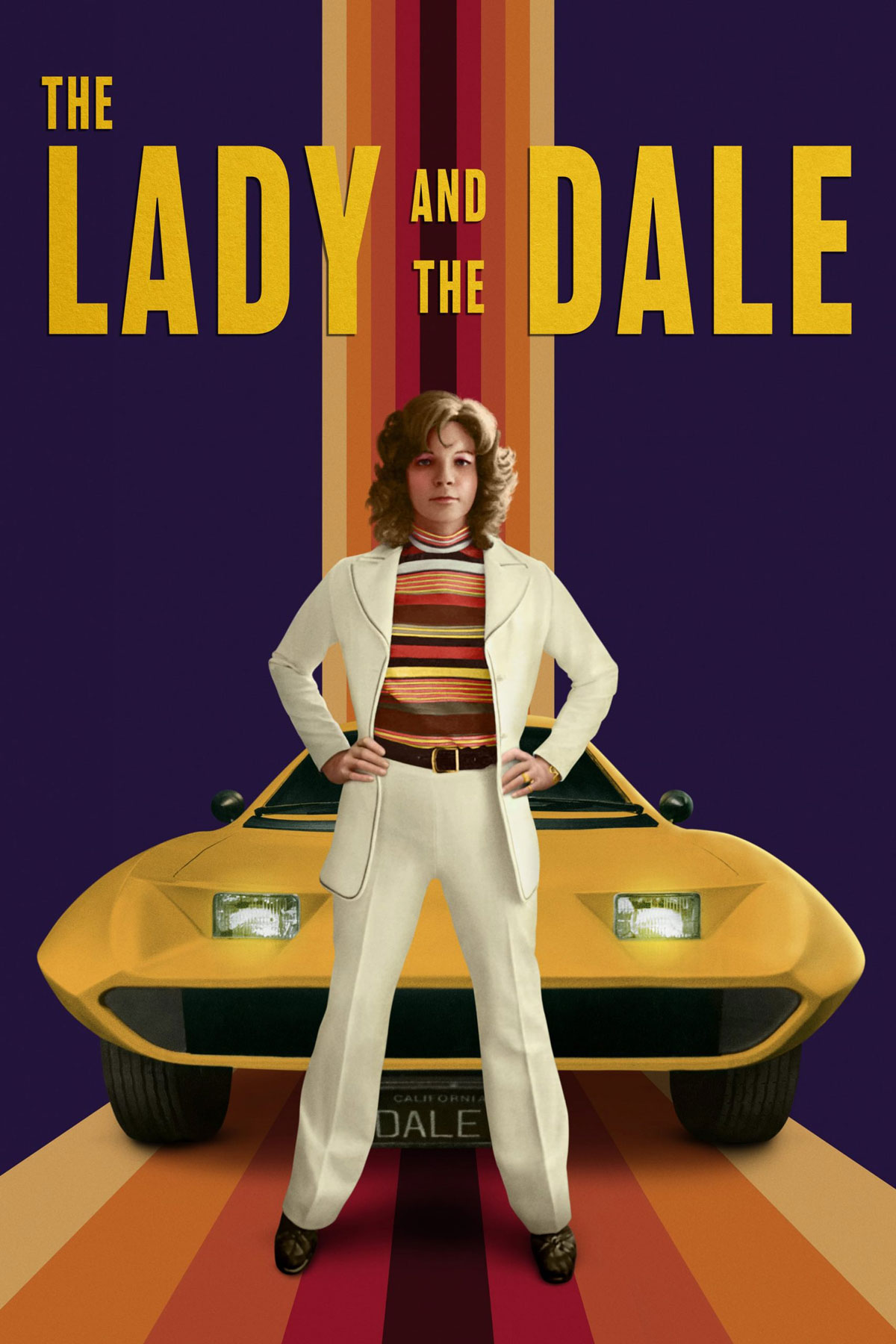 The Lady and the Dale

It’s kind of fun watching documentaries on subjects you know nothing about. Things you feel like you should know about, but just somehow missed. Such is the case of Geraldine Elizabeth “Liz” Carmichael and The Dale. The Dale being a really ugly three-wheeled car that she was trying to develop to take on the big three auto manufacturers in the 1970s. And Liz Carmichael being former fraudster Jerry Dean Michael, who was not only not an engineer with multiple degrees as she claimed, but also not actually a woman. Which, okay, I’m going to leave there because she is actually a trans woman, but the “twist” is that everyone went in on this car scam knowing nothing about Carmichael, even to the point they had no idea she’d formerly been a man who’d sired ten children and was on the run from the law. Damn, the Internet would have been super-helpful back then.

The series is executive produced by Jay and Mark Duplass, so you know it’s not going to just be a bunch of talking heads. Instead it’s told in a very narrative way and illustrated in what I could only call paper doll animation. I mean, there are talking head interviews and old news clips, but it’s all tied together with this kooky South Park–circa-1995 cutout stop-motion stuff. It’s entertaining at first, but kind of becomes old after a couple episodes. I mean, it’s fine, but is probably not as funny or dynamic as they think it is. The tale of Jerry Dean Michael / Elizabeth Carmichael is two fold. It is a crime documentary about a swindler, a con-man, a narcissistic liar. But it’s also about how society and the news media treated a trans woman once they figured out her deal.

First we go back in time to when Liz Carmichael was Jerry Dean Michael. Jerry serially married three different women, had five children between the three women, and abandoned them all. Like up and moved in the middle of the night. So, not a good dude. In 1959, he married Vivian Barrett Michael and had five children with her. During this time he’d been making money through forgery, scams and general illegal shit. But, in 1961 he was finally arrested for counterfeiting money, and instead of facing prison, he went on the run with his wife, Vivian, and their children. While on the run, the couple had more children, while they moved from city to city, campground to campground. The whole time running various scams to make ends meet. There is a weird forgiveness in the tone of the doc for the illegal activity and the victims of the crimes. An issue I had with the doc overall. Anyhow, Jerry began crossdressing and eventually transitioned into Liz Carmichael. Eventually landing as Liz with Vivian and five children in LA in 1963.

There she worked for this weird company that basically looked at invention ideas and helped usher them through the patent process. And that’s where The Dale comes in. The patent application for this ugly-ass three-wheeled car that claimed 70 miles per gallon came across her desk. At a time where gas was spiking, and the “big three” Detroit automakers dominated the American market with their giant-ass gas-guzzlers. Carmichael saw an opportunity and grabbed it. Grabbed it by lying about her background, her education, her expertise and pretty much everything about herself. Once a scammer, always a scammer.

And this is where I parted ways with the doc’s POV. It seemed like the doc was pushing the narrative that Carmichael was being an honest broker in her attempt to make a go of The Dale. That she honestly thought she could build the better mousetrap, circumvent the traditional auto system and make things better for her fellow human beings. The issue is, Carmichael was a fucking criminal and had never approached anything she’d done altruistically. Despite what her family says. She was a narcissist. If you watch the doc, it’s pretty clear. She wasn’t selling the car. She wasn’t selling the benefits of the car. She didn’t give a shit if it worked. She was selling herself. She wanted to be seen as Henry Ford or Lee Iacocca with her larger-than-life personality and her queen’s scepter. The car and its goal of bringing affordability and sustainability were just a means to an end for her. Which makes you feel for the many designers and engineers they interview, who seemed to genuinely believe in the product, and the goal of the product. While Carmichael continued to lie to her employees about funding and timelines and her dealings with the government. Ultimately the product was a piece of shit and the whole Twentieth Century Motor Car Corporation endeavor was just a giant Ponzi scheme to keep Carmichael and her ego in the news. To look at it any other way is pretty disingenuous — though it seems the doc’s writers were okay with it.

So, as the legitimacy of The Dale starts to erode — because, again, Carmichael is not a business person, or an engineer, or anything other than a conwoman — it becomes evident that Carmichael is becoming desperate. And when the law is closing in on her scheme — they’d essentially pre-sold cars to people with absolutely no way to actually deliver cars — she did what she does best and went on the run. Leaving her employees holding the bag. Is this a person who deserves our sympathy? Ditching her original five children. Sidelining her poor wife, Vivian, whom she claimed was her secretary. Moving her five kids from place to place as she ran from the law, and the Twentieth Century Motor Car Corporation employees whom she left to fend for themselves as she went on the lamb. Again. Well, as long as she was cool. Until she wasn’t. The law moved in, she was arrested and imprisoned.

And that’s when the doc changed perspectives. Because Carmichael was put in a men’s prison. The doc brings in trans advocates and others to talk about the situation. They show the local news at the time mixing their pronouns when reporting on her. They interview this one dick reporter whom I totally remember from my childhood in LA literally going after Carmichael by calling her ‘sir’ and stuff. And, yes, society was transphobic back in the 1980s. Is this a surprise to anyone? Society is transphobic in 2021. But to hold Carmichael — an admitted criminal and clear narcissistic shitbag — as a trans icon seems one step too far. But this seems to be what they’re doing. And, yes, we have to assume her transness is real and not just some concoction meant to evade capture (as some claimed). But with Carmichael, would anyone put her above it? I don’t know. Anyway, it seemed to me a stretch to hold her up as this example of what is means to be persecuted for being trans. Because she wasn’t persecuted for being trans. She was persecuted for being a fucking criminal. Like clearly a fucking criminal. But they treated it like she was this innocent victim who was only in the situation she was in because she confused society and piqued their ire by putting on women’s slacks.

Ultimately, the story of The Dale is an interesting one. Even the story of Liz Carmichael has its place. And I would have enjoyed both of them if this particular documentary pulled back on the editorialization. Or at least told it in a more straightforward manner and let us draw our own conclusions on her treatment within a system that didn’t understand transexuals. I mean, I get they’re trying to make this more than a story about a shyster who fooled the world with her magical car that wasn’t, but it’s hard to ignore her Ayn Rand-loving stance (that just so happened to conform to her criminal outlook), or her love of self-preservation and disregard for other human beings. And the whole “she did what she needed to do to protect her family” angle is also bullshit. The only reason her family needed protecting is because she put them in harm’s way by doing illegal shit and running from the law. If she had just fessed up to the original counterfeiting crime in the first place and served her short stint, nobody would need protecting from anything. Everything that happened afterward is her fault. Her doing. All because she was a criminal and an egomaniacal liar. And not because she was a woman who was born a man. I’m not saying that gender politics didn’t play some part in the sensationalization of this case in the press, but to paint her as anything other than a lifelong criminal is not being honest about the subject. She hurt a lot of people in the course of her Dale deception and her series of illegal enterprises, but the series tried a little too hard to steer away from that fact and into the gender bias story, which just didn’t hold water with her as the central subject.