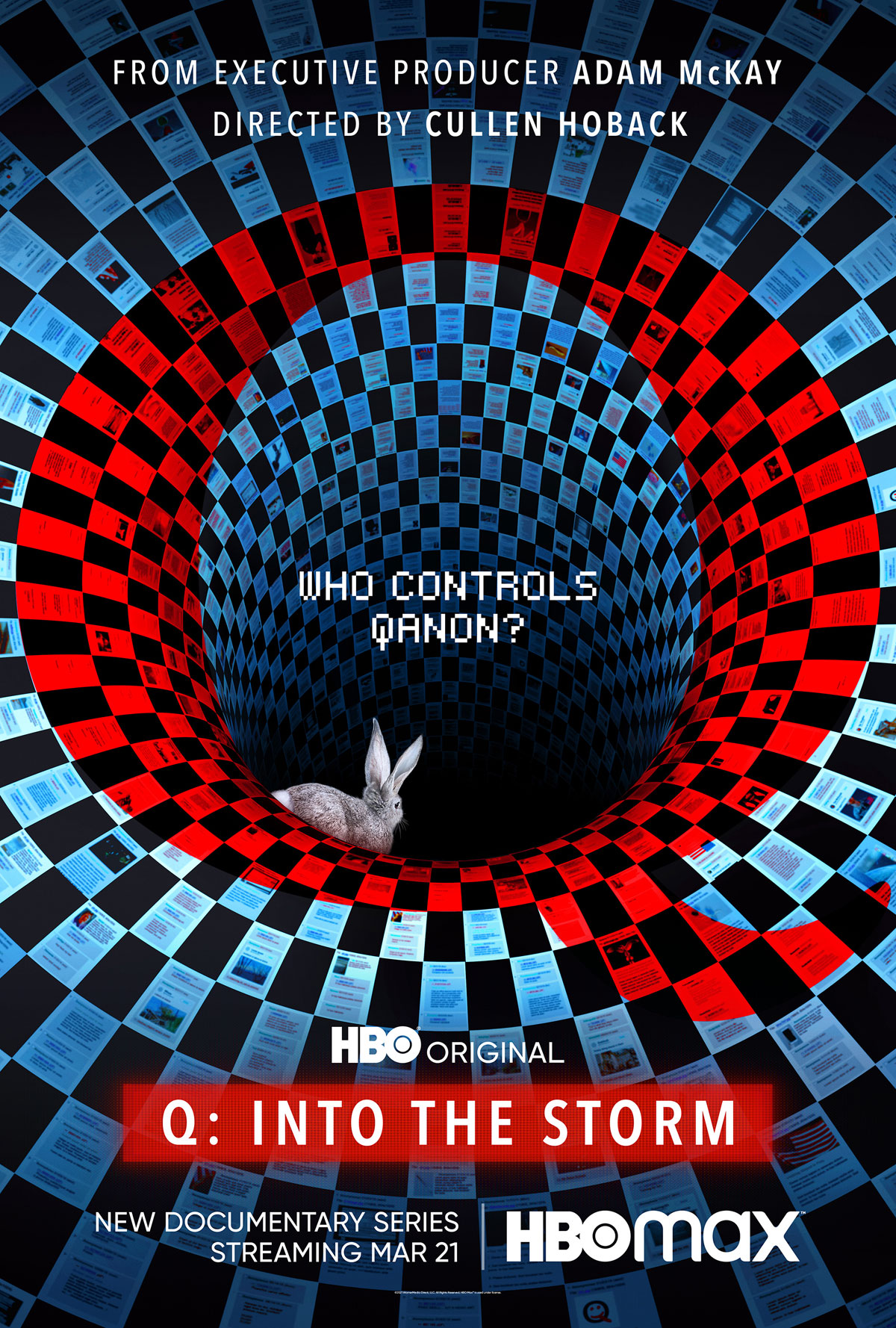 Q: Into the Storm

There’s something about these conspiracy theories and cult-like followings that always feel tenuous. QAnon is such a confusing mess of bullshit that I’m not really sure what to call it. But the entire tower of lies and wackjob nutiness relies on Q being a real person. A real person giving them real information in his “drops.” So if Q is just some dufus in his basement on a Commodore 64 laughing as he gets your great uncle to believe that Hollywood Jews are eating babies, and the world pulls back the curtain, then the tower falls. Like, say, Christianity. Or any religion for that matter. They’re all based on us — humans — being created in the image of god. It means that we’re special. That we’re all god’s creatures, special and unique. And then… when we discover that there are aliens, that all goes away. Not so special now that the holy ghost is partying with the green guys, right?

But when those aliens land, you know Christians will change tack and be all like, “Well, you know, uh, we, uh, it’s god’s plan for us to be invaded and eaten by a smarter, more advanced race who in no way negates what we believe. That in no way negates our beliefs that are essentially predicated on us being alone in the universe because our invisible dude in the sky made it so.” Same goes for these QAnon idiots. Because all the evidence that is surfaced just in this documentary points to the fact that Q is some sort of demented joke. Or a weirdo power play. Or just some spectrum-y dude’s idea of fun. Whatever the case, it should be evident, even without this doc, that the whole thing is a bunch of absolute nonsense. And it’s really sad, depressing and confounding that anyone — even the old dummies who crowded Trump’s rallies — would believe any of the crap that this conspiracy spun up.

What this doc attempts to do is pinpoint the genesis of the QAnon conspiracy. And then trace it in a very practical way as it worked its way from 4chan to 8chan to 8kun. The end result is an attempt to tell us who Q is. Or at least that’s what the throughline seems to be. What we end up doing is going deep on the father/son team of Jim and Ron Watkins. Like real deep. To the point where anyone tuning into this thing to learn more about the QAnon “movement” and all the politics and national and global affect of it would most likely find themselves disappointed. But if you’re really into the way that message boards, cyber ownership, domains, hosting and how content is distributed by a couple freaky dudes, this thing will be your jam.

The result is that this doc is super-specific. You have the man who is set up as the protagonist, Fredrick Brennan. Born with brittle bone disease and wheelchair bound, he provides a sympathetic character for us to root for. (So much so that the doc creator involves himself in Brennan’s legal and emotional battles with The Philippines government and the Watkinses.) Though Brennan is also extremely smart and seems to enjoy torturing and destroying those who he thinks have done him wrong. He started 8chan and eventually seeded control of it to the Watkinses because they had the funds to keep the servers running after it got popular. And then Q happened, which started a whole dance between Brennan and Jim Watkins, his once boss, who set him up with an apartment and a nurse and maybe a wife? Jim is a super-weird dude with a waxed mustache and what appears to be some sort of oddball Asian porn empire. But, honestly, it’s a little unclear how he makes his money (besides owning a bunch of pigs) as he lives his life as an American ex-pat in The Philippines.

His son, Ron, is an even odder fella. He’s essentially the Webmaster (for lack of a better newbie term) of 8chan. I think he has some sex dolls and is really into strange shit. His personality is one part Rain Man and one part Mr. Glass from Unbreakable/Glass. Despite the fact Brennan is the one with the glass bones. He appears to be really happy to talk to the documentarians. Even though he spends the whole thing basically mumbling that he doesn’t know shit about shit. Even though he’s clearly a gifted computer dude, and has that twinkle in his eye whenever he pretends to be a weird, clueless imbecile. Even the cutoff gloves and tape on his glasses belies his strange desire to manipulate and garner power and a modicum of fame. Both he and his dad spend the whole series shrugging at any suggestion that they have a political bone in their bodies. Despite the fact they both have clearly gone deep on the Ayn Rand and right-wing-leaning libertarianism. They are both a confusing and fascinating duo. And watching Brennan battle them while they pretend to be baffled by the fact he’s battling them is kind of mind scrambling. Weirdos.

This is all to say that the documentary, as a QAnon primer and investigation, isn’t great. It’s overly long and doesn’t really pull in the larger geopolitics at play that helped create the fervor for QAnon. But as a document of the mechanics of how things are perpetuated online, and how a singular point of craziness can be manipulated by what amounts to one dubious businessman and one lowkey genius hacker-like dude, it’s pretty interesting. And, of course, the gullibility and stupidity of the American Public at their hands. They figured out how to take a property that happened to catch fire during a vulnerable time and spin it into a phenomenon. Somehow understanding that even something as absurd as QAnon could become a thing. The baby eating, the blood sacrifices, the Trump savior complex, the underground pedophile ring in the pizza restaurant basement, the horrendous anti-semitism. It’s all so dumb and destructive. But somehow the Watkinses hit on something. And even after they seemingly get exposed in this documentary, the Q freaks will still believe in Q the same way Jesus freaks will still think they’re special when our alien overlords prove that that man in the sky might as well just be an anonymous user on a bulletin board. It all feels like one giant practical joke on a really, really stupid sector of the public using a new [to them] platform that these same people take as gospel just because it’s in writing/pixels.