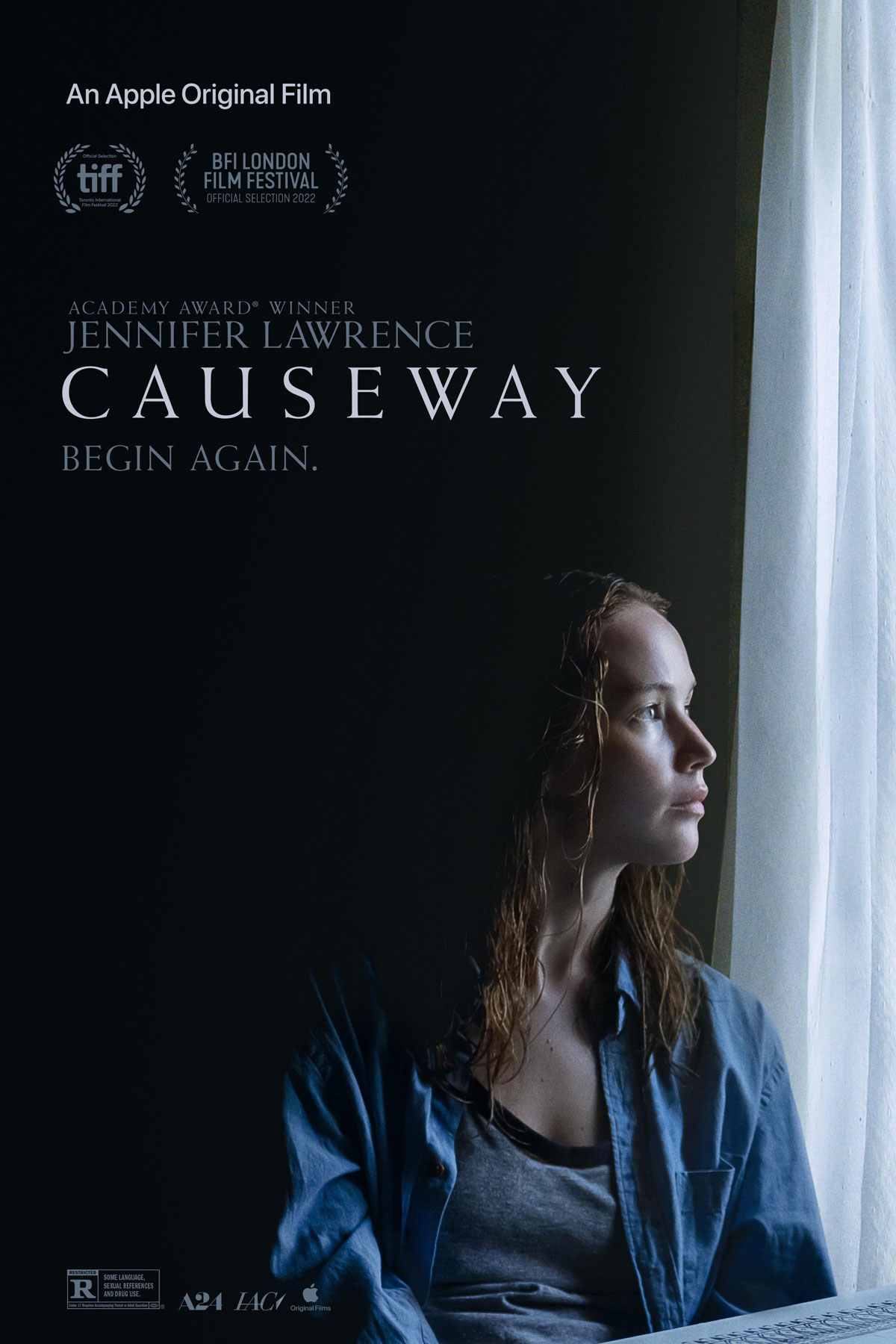 I can’t help but feel that movies like Causeway are just an adult version of the issue-of-the-week, very-special-episode type thing. I’m also — and I’m sure I’ll get killed here — not sure Jennifer Lawrence is an awesome actress always. It’s not that she isn’t good in certain roles, but after watching what I imagine felt like an Oscar role in the script, I realize her acting is kind of samey samey in a lot of instances. Not that her roles are all the same. She just is. It’s her low-key acting style that probably reads good in the room, but feels undercooked on screen. Which is funny, of course, as she’s paired with one of the more subtle actors around these days, Brian Tyree Henry A dude who acts almost entirely with his face. His expressive-ass face. In contrast to Lawrence’s pleasing, but utterly characterless face. The thing barely moves.

I think this is what the pros call a two-hander. It’s essentially a movie with these two people dialoguing about stuff. Sure there are other people in the film, but they dominate the screentime and are the core relationship. A woman with brain trauma from a wartime accident on the mend and a dude with more obvious scars. A missing leg, to be exact. The two of them find each other in New Orleans as they share their loneliness and trauma. That’s it, that’s the film. If you like this type of talky-talky thing where you know exactly how the cadence of one of these films goes, then you’re in luck. If you feel that movie should be a tidy 90 minutes and not fuck around with giving one of them cancer or a secret career robbing banks, then this is your thing. Nope, it’s just two sad people hanging around in the South who form an unlikely friendship. I’ll let you guess what happens at the end of act two and how it’s summed up at the end of act three. There are no surprises here. None.

Lawrence’s character, Lynsey, worked for the army corps of engineers in Afghanistan and gets blown up by an IED. She’s sent home with brain trauma, working her way back to health in a rehab facility, and eventually moving back to her home in New Orleans to live with her mom before her eventual redeployment. A redeployment that seems pretty unlikely given her inability to fully recover to the satisfaction of the Army doctor (Stephen McKinley Henderson). Her mom is a drunk, I think. Or is at least a loving but irresponsible mother, prone to flakiness. So we get the sense her upbringing was uneven at best. James (Tyree Henry) owns an auto repair garage and is also a New Orleans native. There is some connection hinted at between his sister and Lynsey playing against each other in basketball in high school. I think this is also some coded language for Lynsey’s sexuality, but that’s probably just me being stupid. But we get his backstory over time, hers over time and the secrets they do or don’t share with each other. But mostly they sit around talking and drinking, moving excercise equipment and smoking cigarettes. It’s all fine. It’s all chill. It’s all just kind of whatever. It feels very COVID friendly, this production.

Until the end of act two, of course. Which I won’t spoil, but needless to say someone messes up something and there is some not-as-mellow stuff. No shootouts. No bag of money buried in a wall. No real secrets that are life-changing. Just dumb human miscommunication and accusations. But those accusations don’t really seem earned. At all. And this is where I think Lawrence’s “subtle” acting fails us. I don’t need her to wear a big “I’m a jerk” sign around her neck, but I think we’re supposed to think she’s this selfish whatever person, when I didn’t read her character that way at all. Her acting is just too subtle for me, I guess. Maybe if she’d robbed a bank or tried to like kill Superman or something, I would have felt it. But, as it stood, I just didn’t get what the big deal was. So the whole movie kind of missed for me. It’s not as if I don’t enjoy her — and I definitely enjoy him — but there’s just something missing from this performance. I mean, I do appreciate that she doesn’t even attempt the Louisiana accent, but something here just doesn’t add up. On the flip side, Tyree Henry can definitely use this as a jumping off point for some more “serious” roles. And, sure, it feels like one of those old movies of the week, but there was a time not long ago when a quiet, indie type adult drama would have excited some of us. Maybe not so much anymore.