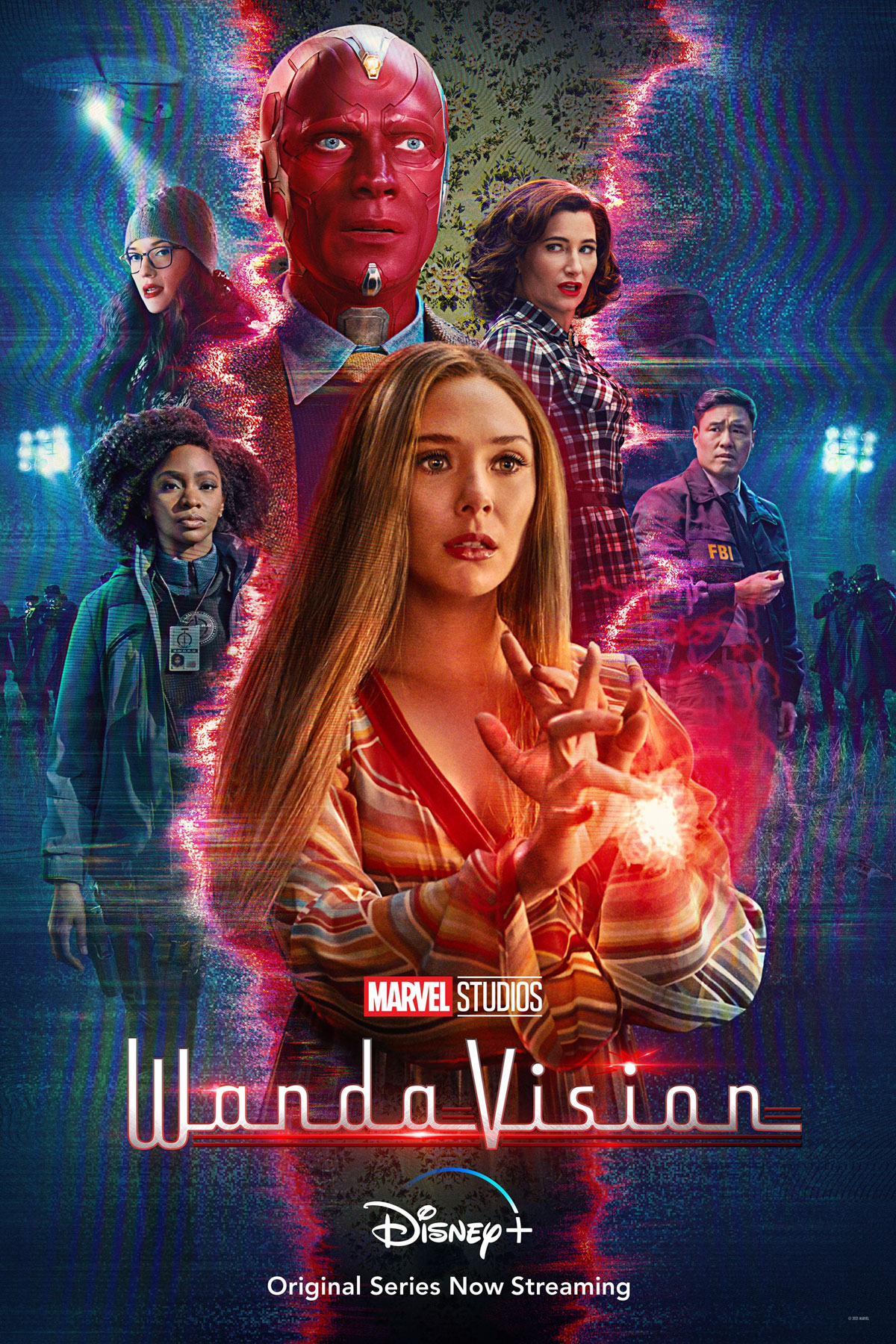 I’m not certain what I expected of a Marvel series about a superhero I know nothing about. But Hipster Jr. Jr. wanted to watch it. And we’re paying for Disney+ since subscribing to see The Mandalorian, so it only made sense to dive in. Despite — as I said — caring not a wit about Wanda Maximoff or Vision. Which — just in case you couldn’t put it together — are the title characters of the cleverly-named WandaVision. Although, apparently Wanda is also Scarlet Witch. So it could have been ScarletVision. Or WitchVision. But, whatever the case, I have never really understood these characters, and felt that the one Avengers movie that seemed to focus most on them, Avengers: Age of Ultron, was mostly a nonsensical, confused borefest.

And, yes, this show tries some stuff. Which in and of itself makes it worth a watch. That stuff is mostly trying a high-concept narrative that involves Wanda creating a false reality for herself that manifests as her and Vision starring in sitcoms from different eras. Starting in the 50s in episode one and working its way through to the 00s when they kind of abruptly can the concept and just go full special effects, Marvel superhero battle. It was certainly fun trying to guess what they’d come up with next after the obvious nod to The Dick Van Dyke Show in the first episode and working their way through The Brady Bunch and a very familiar-feeling Malcolm in the Middle tribute later on. But while it’s fun, it also feels super-gimmicky. And especially like something a room full of TV writers would cook up. Because — as we’ve said a million times before — there’s nothing TV writers like more than writing about TV. The same way book writers love to write about writing books and film script writers love writing about movies. So, while it was stylistically fun, it ultimately did very little to forward the plot and/or tell us much about the characters. They tried, in the waning moments, to put Wanda’s magical TV show construct into context, but what happened after just kind of doomed it to be more gimmick than deep-rooted psychology.

To add, the whole TV construct thing was confusing. I’ll explain a little. We see Wanda and Vision living as husband and wife first in a black and white sitcom. And then in another genre and time period of sitcom in episode two. And so on. We find out later that these sitcoms are actually being broadcast out to the world in some manner. To which Hipster Jr. Jr. (a kid who generally follows things very well), asked: so, is this “show” on like once a week at a certain time for a certain amount of time? Or is it like always on? In which case, when do they change genres? Do just go from one room to another and all of a sudden they’ve moved from an 80s style sitcom to a fourth-wall-breaking 90s style one? Like what’s the deal here? I asked myself the same questions. What are the rules? If you’re going to create this conceit, give it some structure. But like a bunch of things in this series, they just kind of yada-yada it. And we’re just not expected to ask questions. Apparently.

So this sitcom world that Wanda has constructed for herself is a literal bubble (that they term The Hex) that she’s formed around the town of Westview, NJ. The inhabitants of said bubble are under her mind control and live out their lives as if they’re in Wanda’s little sitcom. I ask — as a resident of the state of NJ, which has the highest population density in the US — how is it that nobody ever comes upon this town? Because, as we see, the bubble acts as a force field, not allowing anyone in or out of it without major effort and trauma. So you’re driving along a road on your way to a soccer tournament and all of a sudden you hit an invisible barrier that wrecks your car. You get out and realize there’s a force field preventing you from progressing. Nobody has done this? Nobody’s called the cops or gone on YouTube to talk about this anomaly? Seems odd. And unlikely. So, more hand wave that they didn’t even bother addressing or really even waving a hand at.

Eventually, though, the bubble is discovered, and in comes what I think are three different law enforcement units. Two of which are made up and another that is the FBI. I think. Another kind of unexplained, confusing piece of this. Because I don’t get the different between S.H.I.E.L.D., S.W.O.R.D. and the FBI. After all, I believe Randall Park’s character is wearing an FBI jacket the whole time, but is maybe part of S.W.O.R.D.? Or maybe he’s not? Anyhow, they set up camp outside Westview and monitor the ever-changing sitcom, the location of Vision and various other stuff. I watched all nine episodes and I’m still unclear what their motivation was. I think it has something to do with the weapons value of Vision, but I’m not sure. Especially since we know Vision died in Avengers: Infinity War, so this Vision must be part of Wanda’s grand illusion and as such not at al valuable. But then there’s also agent  Monica Rambeau (Teyonah Parris), who I think is supposed to be a good guy who cares about Wanda? And she is somehow granted super powers by passing through Wanda’s bubble a couple times. Maybe? Again, I didn’t find a reasonable explanation for this.

There are so many other things that happen that make little to no sense, but we’re just kind of expected to roll with it. Including Kat Dennings’ amazing and completely unrealistic hacking skills. Characters’ ability to magically break out of handcuffs. And a completely inept group of government soldiers, commanders and clowns who can’t seem to do even the simplest thing right. Again, I think we’re just supposed to ignore the little details and go with it. But you know that’s not my jam. My thought was that there was going to be some sort of cool reveal at some point in the show. The sitcom genre thing was a little hokey, but it seemed like the appearance of Evan Peters — who played Pietro Maximoff in the X-Men movies, but not the Avengers ones — portended a clever, unexpected twist that never came. Instead we ultimately got a bunch of CGI battles in the sky that added absolutely nothing to the mythology, the characters or our sense of entertainment. It was lowest-common-denominator stuff. And super-disappointing, truth be told.

Even with that, the show had its moments. Not a lot, mind you. Because, as it turns out, I still don’t give a shit about Scarlet Witch or Vision. Because one is a seemingly all-powerful, uh, witch for some reason. And the other is a robot. A robot who was killed back in 2018. I don’t care about their kids, who are clearly not real. I don’t care about their house, which is clearly not real. And, frankly, she’s a terrible asshole for torturing a bunch of Jerseyites just because she had a shitty childhood and someone killed her android boyfriend. Not cool, Wanda. I have a bunch more nits, but will save them because they’re pretty spoiler-ish. Suffice it to say, the ending doesn’t really clarify who are the good guys and who are the bad guys other than some government dude who I guess is kind of a jerk about things. But, again, he didn’t fry the brains of an entire town full of people to the point where they begged for death. He just wanted to get his government-owned hardware back. I think.

Meanwhile, the acting on the show is decent. Elizabeth Olsen is great, although her character is written in a pretty humorless way. Paul Bettany seems like he’s having fun playing a character who only has synthetic feelings and no genitals. Dennings and Park are busy yucking it up, but feel like they’re in a different show. And Kathryn Hahn is very Kathryn Hahn as the sunny, but nosy, next door neighbor. Her character ended up confusing the hell out of me, though. Like how she entered the Hex. Why and how she reveals herself to Wanda, and what her ultimate fate is. Because — and you’ll see when you watch it — Wanda solves the problem of her and then in the next moment pretty much undoes it with a single action.

And, yes, I get the show is supposed to be about trauma — Wanda’s to be more specific. But, honestly, that’s become a complete trope at this point in 21st century television. Everything is a metaphor for trauma. Or motivated by it. I get she grew up in some fictional war-torn Eastern block country called Sokovia and saw her parents blown up in front of her. That very much sucks. But it seems that this trauma for which she is exacting her seeming vengeance on the world is more caused by seeing her synthetic boyfriend get a jewel ripped out of his synthetic head by a giant purple dude in a golden, bejeweled gauntlet, more than anything else. I’m not sure where this character goes from here, but I’m pretty sure there’s no WandVision II. Presumably she’ll be thrown back into the Avengers universe to throw some CGI fireballs and maybe mindfuck some more innocents while people make excuses for her belligerence and disregard for human life.