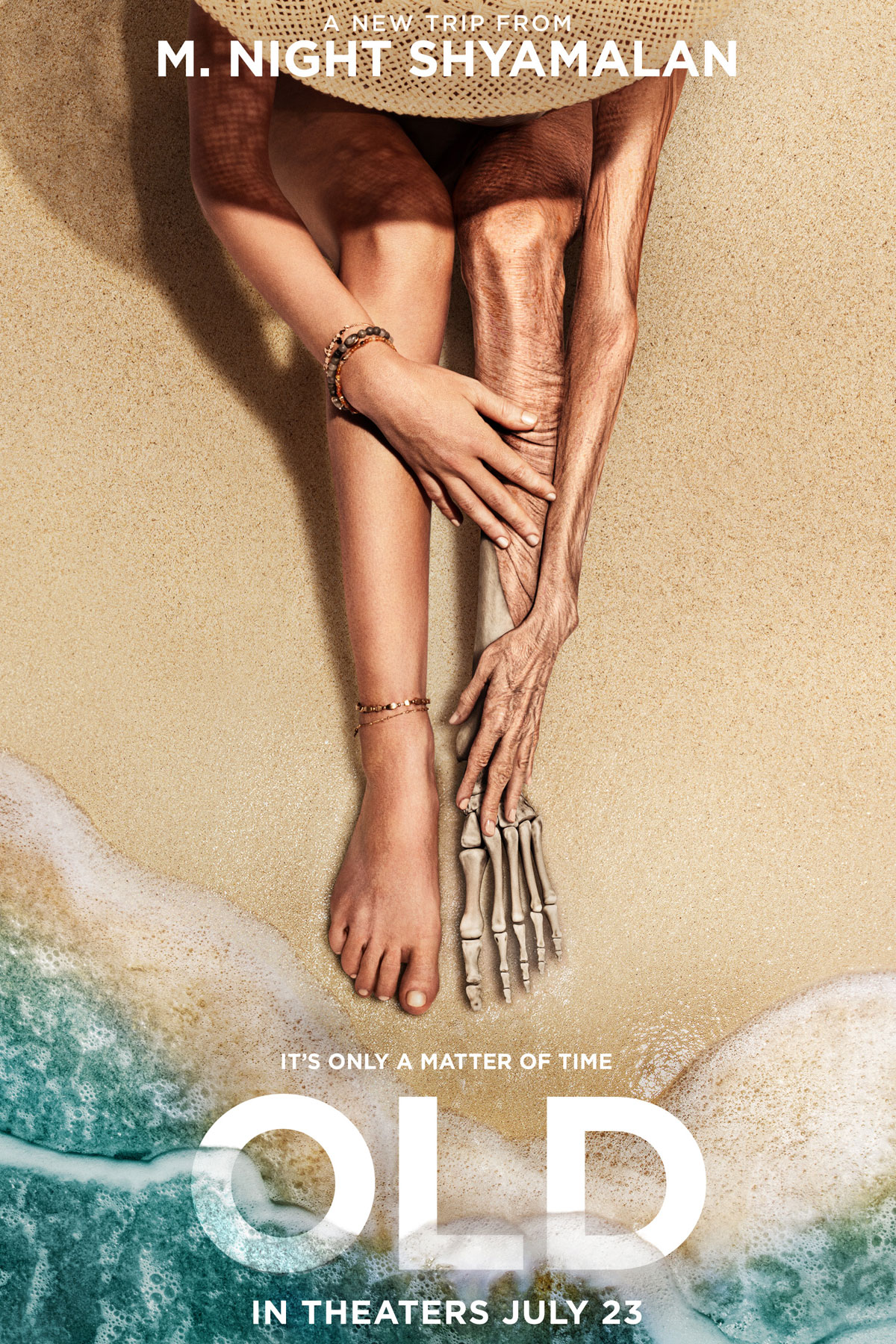 My god, what have I done? Beside using a lyric line from the Talking Heads as the opener for an M. Night Shyamalan movie review entitled Old, that is? I watched the trailer for this thing and knew it was going to be a stinker. Yet I persisted. Or insisted? I don’t know, my life choices since COVID have been pretty suspect. And it seems that too many of them include watching shit by M. Night. Because I can’t quit him. And my brain is broken. Even though — when you really think about it — the man has made a grand total of like 2.5 decent movies (which, for me, includes the divisive Unbreakable). The rest of his oeuvre is a mix of cheese, retreads and flat-out awfulness. But somehow he keeps finding people to fund his projects, and I keep watching them. Stupidity breeds stupidity.

The thing is, the idea here could have been interesting. Which means, of course, that the idea wasn’t, in fact, M. Night’s. It was taken from a graphic novel. Not one I’ve read, mind you. Because, well, I don’t generally read comic books. Nor do I speak French, the language in which the book was written. But M. Night takes this interesting idea and just layers on this kind of floppy lameness that he layers onto everything. This movie, more than most of his movies, feels awkward in so many ways. From the plot, to the script, to the acting. It all comes across as either rushed or unfinished. Or just poorly executed. Something about it just read unprofessional and almost b-movie-ish.

The plot is sort of a simple one. There’s this resort hotel on some island or other. The resort’s manager invites a group of guests on a special off-resort trip to an isolated beach. Once there, they realize they’re trapped and start to age rapidly with no way to escape the ravages of an accelerated death. They are driven there by a continuously terrible-acting M. Night. And there is a rapper in the party stupidly named “Mid-Sized Sedan.” So that gives you an idea of what we’re dealing with here. That said, the rules around aging are kind of yada-yada’d (assumed to be about one year for every thirty minutes), but the children age a lot faster than the adults and the old people are pretty much just hours away from basically turning to dust. Like a lot of the film, the aging makeup and whatever they did with the actors to make them look older generally didn’t really work. Also, if you aged a year in 30 minutes, wouldn’t you need to eat pounds of food and use the bathroom hundreds of times? They tried to explain that away, but it was nonsense.

So what we have here is a set up that could be an interesting study about the meaning of time. And what happens to our relationships when time is compressed to the point that we need to come to terms with everything in the immediate. Basically themes that I’m not smart enough to explore in an intelligent way. Thing is, neither is the dude who wrote and directed Old. Instead, he does some little nods to horror, gross-out stuff and essentially writes everyone in the most expected and terribly flat way. As if he fed the plot into some computer program and had the thing spit out a screenplay with all the parameters set at five (out of ten). He had the ability to go out there. To really explore some interesting human emotions and relationships. But instead he goes the rote Stephen King route and just hits the expected notes. And, again, I think that’s a mixture of the script limitations, in addition to the way he directed the actors to deliver the lines he put in their mouths. I just can’t say at this juncture what exactly they’re hiring this dude for. It’s not his direction and, after this, perhaps they’ll start second-guessing his writing. Because apparently they didn’t take away his MS Word after The Village.

I think the major issue here is that we have no anchor in terms of the characters. We don’t know them, don’t care for them and, in some cases, are just mainly annoyed by them. They are paper dolls with lame backstories and lame personas. I just don’t get what M. Night was going for here. Or at least I didn’t until the typical Shyamalan ending rears its head. Ah, there we are. He fell in love with the “twist” and just kind of ignored the soul of the film to get to it. But what is a twist without the build-up to the payoff? Think of The Sixth Sense and why that movie worked. The twist wasn’t just a bolt-on for the sake of the twist. It was integrated into a familial story that really kind of hit you with that emotional wallop because you cared. It made sense in the context of the entirety of the movie. This twist is less of a twist than it is a mere mystery reveal. We weren’t trying to solve a mystery in The Sixth Sense because we didn’t even really know there was one until it was revealed. That’s what made it a real twist. He tried that method again in The Village, with terrible consequences. In Old, there is a mystery about why people age on this beach, I suppose. A mystery I’m not certain we needed to solve. But he gives us the answer at the end anyway. Terrific. And the resolution could have actually been a decent one in better hands. Instead, the mystery reveal is clunky and botched in such a way that it’s just shruggy. Nice one. Also, Old is a stupid name for a movie. I said it.