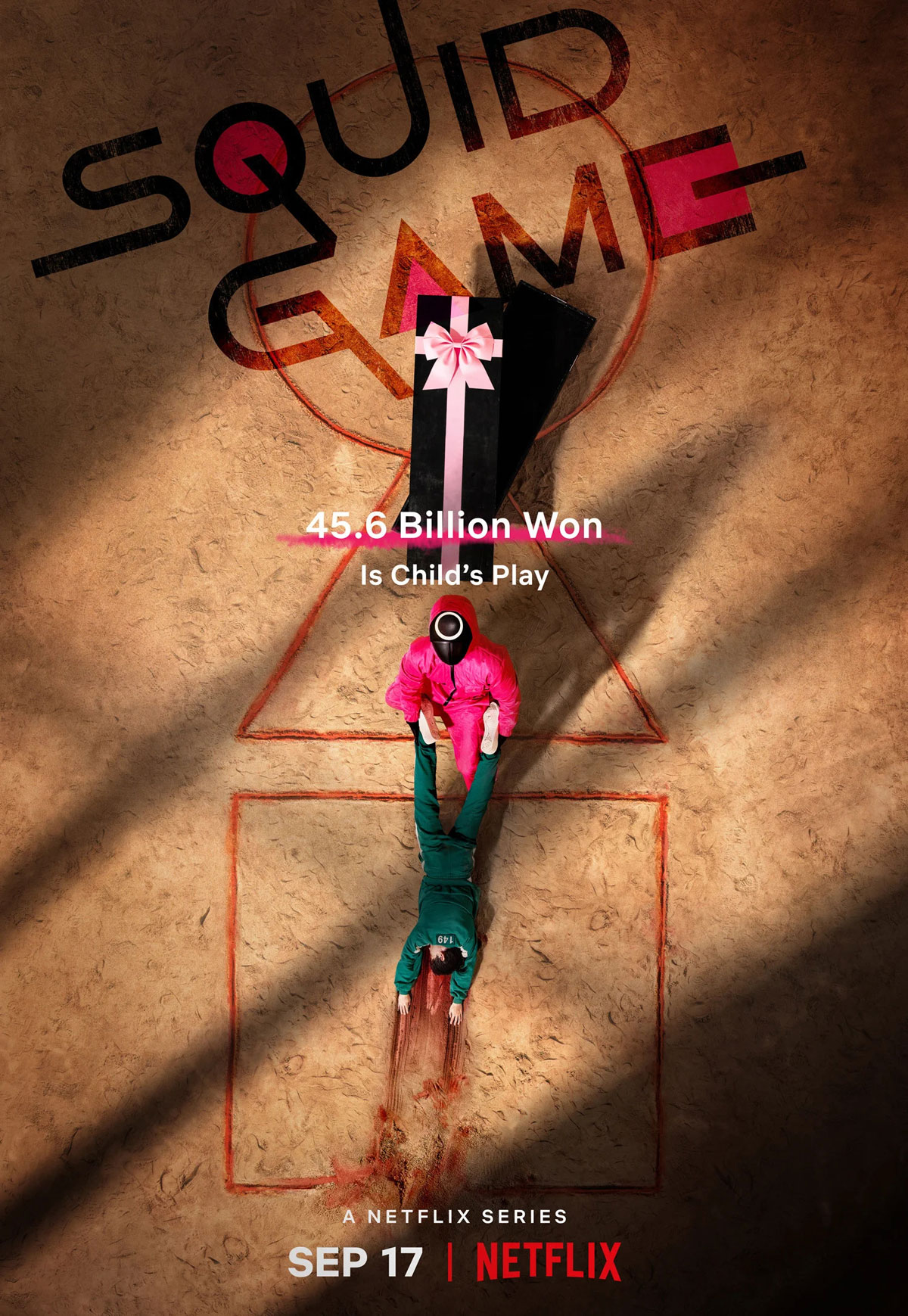 It’s pretty interesting that this semi-futuristic Korean horror fantasy show got so popular in the US. Yes, it has elements of the social commentary of another very popular Korean media product, Parasite, but it honestly feels not unlike a ten-episode Black Mirror arc. And I have to assume that way less people saw the multiple seasons of that show than the one season of Squid Game. Despite the fact they’re both on Netflix. And Black Mirror is in English and starred some actors with whom Americans are familiar. This all assumes that the people with whom Squid Game is popular weren’t watching the dubbed version, and were, in fact, reading subtitles like any sane person should. This is all to say, I watched Squid Game and enjoyed it very much, but am surprised that so many others did as well considering most American’s aversion to reading and weirdo violent foreign stuff. ‘Merica!

The show’s title is based on a Korean children’s game. I figured it was made up for the series, but a quick Google tells me it is indeed a real game. And I gotta say that even after nine episodes, I still have no clue how the game works. There are some lines and someone has to knock someone out before he gets into the squid’s head. Or something. But that’s not really that relevent. Children’s games in general, however, are relevent because they form the basis of the challenges that this survival series builds upon. This is by no means the first narrative of its kind. Not even close. Think The Running Man. Or The Hunger Games. A contest to the death where the disenfranchised are essentially wrangled to murder themselves. There is ostensibly a “prize” at the end for the winner, who must not only survive, but face moral conundrums along the way.

In this particular dystopia, we are not faced with the insane police state of The Running Man, nor the fantastical world of The Hunger Games, but modern day Korea. Granted, a Korea that feels like the oddball, generic, slightly askew city world of Fight Club, but one that I imagine Koreans would recognize. Our protagonist, Seong Gi-hun, is a former assembly worker, current underemployed chauffeur and full-time degenerate gambler. He’s not so good at that last thing, and has squandered enough to be living with his elderly mother in a tiny apartment. While his ex-wife lives with her new man, along with his adolescent daughter, whom he seemingly fails to do right by despite his fumbling attempts. He’s your quintessential loser.

So when a be-suited dude comes along and offers him the opportunity to play some kids’ games in order to win tens of millions of dollars in some shady under-a-mountain-in-the-ocean prison thing, he jumps at the chance. Well, not so much jumps, but reluctantly complies. Along with a bunch of other dudes and women who have found themselves in the same or similar positions. Indebted. Poor. Homeless. Old and infirm. Unwanted. The dregs of a society that places no value on them. The invisible. The disposable. All controlled in this underground lair by guys in matching pink coveralls and creepy Playstation symbol masks. And then the bloodshed begins.

Let’s get this straight: I don’t speak Korean. Surprising, I know. I’ve been to karaoke bars in LA as a younger person with a couple of my Korean friends and listened as their friends sang Korean songs. I used to call one of my friend’s houses in high school and his grandmother would answer the phone and speak to me in Korean despite my protestations until I slowly placed the receiver down and cut her off mid-sentence. So, I’m not certain how the acting is in this series. But I can tell you it’s certainly entertaining. The lead, Gi-hun, acts with his whole body. An exaggerated pantomime and mask of grimaces, shock and sadness. In fact, all of the actors practice the art of yelling and throwing themselves around in an incredibly fun way. Crazy Han Mi-nyeo menaces and bugs her eyes. The thugs pound their fists and scowl. The cowards cower and frown and whine. It’s all as it should be, and despite the language barrier, you know who’s who and what’s what just based on facial expressions and body language. It’s all very, uh, animated.

The thing I didn’t expect, though, was some of the emotion the show brings. And I think maybe this is where the show separates itself. Despite the gory setup and animalistic simplicity of the deadly games these people must play in order to win a giant piggy bank full of cash, there is some genuine human heaviness that we witness. Even with some of the silly translated dialogue. The over-the-top colors and almost cartoonish action adds to the turnt-up-to-eleven quality of the whole thing. And while the super-baddy in his mask, along with his cabal of rich, fat cats, borders on absolute absurdity, it fits the parable nature of the story. But even with all of this technicolor craziness, the creators of the show keep episode six in their holster. The magic emotional bullet that just puts the show over the top. This oddball narrative about desperation gets to the heart of human nature, a shared human experience. I just didn’t see it coming, and that shit was fucking devastating.

The show really never hits that high again, unfortunately, but I don’t think it possibly could. In fact, the last two episodes get a little wobbly trying to wrap up the season and set us up for the next. The societal message about the haves and have nots and the structural inequities therein hits a little too hard for my taste toward the end, but I suppose subtlety isn’t exactly Squid Game’s calling card. It’s just that the little moments, in combination with the wild action and horror, kind of make the show what it is. So when it shifts into the machinations of what feels like the writers trying to summarize in an almost epilogue-y type situation, it loses a little bit of its magic. Granted, there are still some cool moments, but it’s way less taut and dynamic. Like I actually checked my phone a couple times in the waning minutes. Mostly because there was way less dialogue, and I didn’t have to look at the TV to read it.

This all said, Squid Game was a really fun experience. And they managed to layer in some social commentary so that it wasn’t just a gorefest. It did a way better job than something like The Hunt, which certainly played in the same space. It avoided farce and managed to make real people out of these characters while wringing out some serious emotion, despite the hyper-reality of the whole thing. I’m super-curious to see how they can make the second season equally exciting, emotional and message-filled without just turning it into a giant, bloody revenge fantasy. Or just essentially repeating season one with new contestants. It’ll be a delicate dance, for sure, but one that apparently an entire nation of caption readers will be thrilled to ingest.