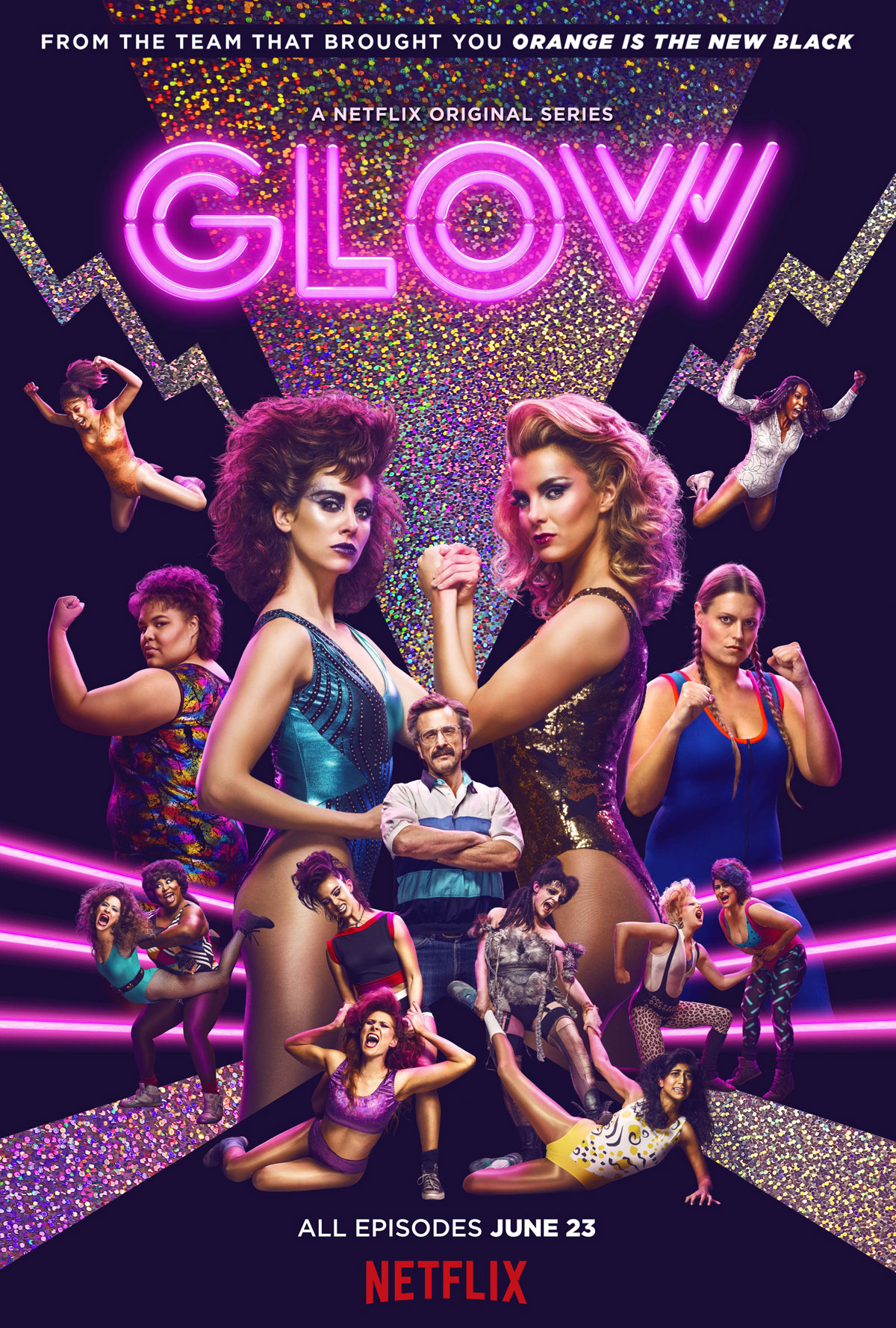 The sad thing is I actually remember when G.L.O.W. was a thing. Granted, I can’t remember the specifics (it was 1986 after all), but I do recall that there were ladies jumping off of ropes onto each other and yipping as if a very strenuous tennis match had broken out. I was of the age that it intrigued me in the way it was probably meant to intrigue me, but I seem to recall it looking pretty low rent and it generally being a bad imitation and cheap knock off of the WWF, which was a thing I barely cared about as it was. Of course, I was probably the target audience at the time — an adolescent male who watched not because I thought the wrestling looked good, but because I thought the wrestlers looked good. You have to remember, this was way before the Internet and Nancy Reagan and her oddball form of prudishness (and very high-necked dressing style) pretty much took over society’s young conscious. So ladies in tights and unitards was about as sexy as we got in our homes on Saturday mornings — or any day for that matter.

So why would would Netflix decide to make a series about a short-lived, money-grab endeavor from the ’80s? Welp, have you ever seen A League of Their Own? That shit was super-popular. And this is so heavily based on it that you might even think — squinting at it — that perhaps it’s an homage. Granted, A League of Their Own (despite being a true-ish story) isn’t unlike any story of the band of lovable losers being the last-chance road to redemption for a fallen grump of a man. So there is definitely a through line from Walter Matthau’s character in The Bad News Bears to Tom Hanks in A League of Their Own and Marc Maron’s character, Sam Sylvia, in GLOW. And, just like those other films, this isn’t that man’s story, but he is the connective tissue that ties all the backstories, diverse voices and, honestly, stereotypes together. In GLOW, they actually ask the women to play with stereotypical wrestling personas, but, ironically, the writers actually stereotype the characters themselves. The Jewish princess, the dumb, white-trash ladies, the large, sassy black lady, the prissy drama queen, the butch athlete, the brainy East Asian. It’s really a grab-bag of 80s-feeling stereotypes that I think is done unintentionally, but comes across as a little tone deaf and vaguely anachronistic.

There definitely is more cocaine in the show than I expected, though. And more nudity. There’s not a ton of either, really, but just more than I expected. Like I thought this would be a slightly played-up network show, but, of course, it’s Netflix, so they probably felt like they needed to show Alison Brie actually having sex for some unknown reason. It was gratuitous, to be sure. That said, Brie is pretty funny on the show. She kind of looks like hell, but is funny at times. The show overall isn’t that funny, however. I mean, Marc Maron is definitely given the best lines and does his downtrodden nebbish schtick to the utmost, which is good for some giggles, but the laughs are definitely few and far between, and those that do occur aren’t of the fall-out-of-your-chair variety. I suppose, as a Netflix show, the humor isn’t necessarily asked to be as broad as your typical CBS primetime sitcom, but it seemed like there were some opportunities to write in some joke-jokes around some of the attempts at slapstick-ish wrestling gags and wacky character side gags. It definitely feels quite a bit like its streaming-service-mate, Orange Is the New Black, in that way, but minus any of the larger social commentary. But like some of the more repetitive, not-so-dynamic episodes of that show.

So where does that put us? The show is fine. It’s like a middling network show that you could have on in the background for years and years. Showtime has made a living putting shows like that on the air with series like Californication and Shameless. Sure, I watched the former for seven seasons after ceasing to care in like season four, and the latter for an equal number of years before completely admitting I didn’t give a shit and skipping its eighth (and hopefully final) season. Based on its ensemble cast and relatively free-flowing narrative, GLOW could be similar in its longevity without a single person ever uttering, “Oh, that is totally my favorite show” or even “Man, I really love that show!” No, it’s just not necessary in this day and age. A perfectly serviceable show with a couple interesting characters or actors can survive for multiple seasons merely to meet some invisible revenue goal. This show can’t possibly cost much, with most scenes filmed in an old gym and the actors, aside from two or three of them, being relatively unknown. It just isn’t inspirational in any way — despite it kind of going for it in the last episode. Kind of. The thing is, it doesn’t aim high, so perhaps in season two they’ll swing for the fences. Or suplex the shit out of it, or something.