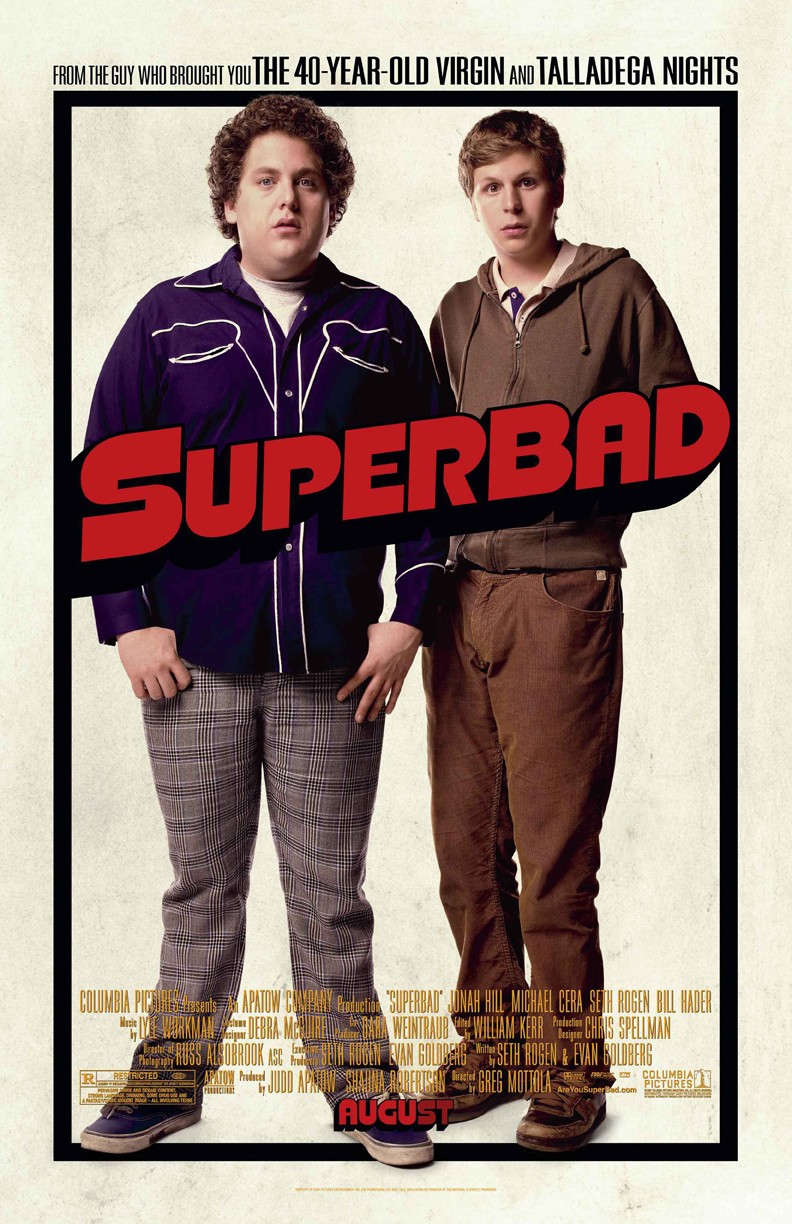 If this movie truly sucked there would be all sorts of fun headlines one could write. The title just kind of writes the article for you. It turned out to be not bad at all, but certainly not as good as I had expected or hoped. I’m not really sure why I thought I’d love Superbad, as I wasn’t the biggest fan of The 40-Year-Old Virgin or American Pie or really any of the teen sex comedies that spawned the latest Judd Apatow-ish movies.

I mean how many dick jokes can you cram into a two-hour movie before they become lame? How many times can you show people barfing? How many headbutts, white guys trying to be “street,” kicks to the balls, fumbling sex scenes, illusions to gayness and small arms fire can you have before it all starts to look the same as every other teen sex romp? The answer is just that many.

Superbad doesn’t blaze any new trails; it borrows from all the films that came before it. I could literally go through 80% of the movie and point to the exact same scene in any number of movies over the years. So the only thing that these guys can do to differentiate themselves from the herd is write some snappy dialogue. And, luckily, this is where these guys excel. The laughs, and there are a bunch, come less from the scenes themselves, and more from the give and take between the main characters, Seth and Evan, as well as their buddy, Fogell.

Michael Cera (George-Michael from Arrested Development) is the perfect awkward teenager, complete with bashful stumbling, floppy running and the nicest of nice-guy nerdiness. Jonah Hill, as his fat friend, Seth, is a perfect whirlwind of teenage disgustingness. His performance, while a bit over the top, is a non-stop barrage of one liners and nostalgic lameness. Christopher Mintz-Plasse, as their sort of friend/punching bag, Fogell (a.k.a. McLovin), is awesome up front but is wasted in a subplot that almost ruins the movie. It’s as if the writers decided they liked McLovin’ so much that they wanted to give him his own movie. So instead of making Superbad II: The Adventures of McLovin, they shoved this offshoot of the story into a film that was going really well. Until McLovin goes on a ride with the two stoner cops.

It’s funny that Seth Rogen essentially tries to wreck his own movie. The scenes with him and Bill Hader from SNL are pretty lame and unfunny, especially compared to the antics being perpetrated by Seth and Evan elsewhere. There were times where I actually missed those two and wished the cop stuff would just end. I laughed heartily several times during the movie, and giggled several times more. There were several titters and a couple heehees, but there could have been so much more if it weren’t for the deviation from the main narrative.

The Seth and Evan characters, unlike some of their predecessors, acted a little more real than the one-dimensional horndogs of the days of yore. I felt the love between Seth and Evan, probably due to the semi-autobiographical nature of the material, as well as the acting of the leads. It’s clear that the development of the other characters wasn’t all there, and was just throw away material to fill some pages and get themselves into the movie somehow. Shame, it could have been so much more. Oh well, I’m sure Superbad: The College Years will be more of the same hit or miss, but hopefully this time they’ll leave the adults out of it.