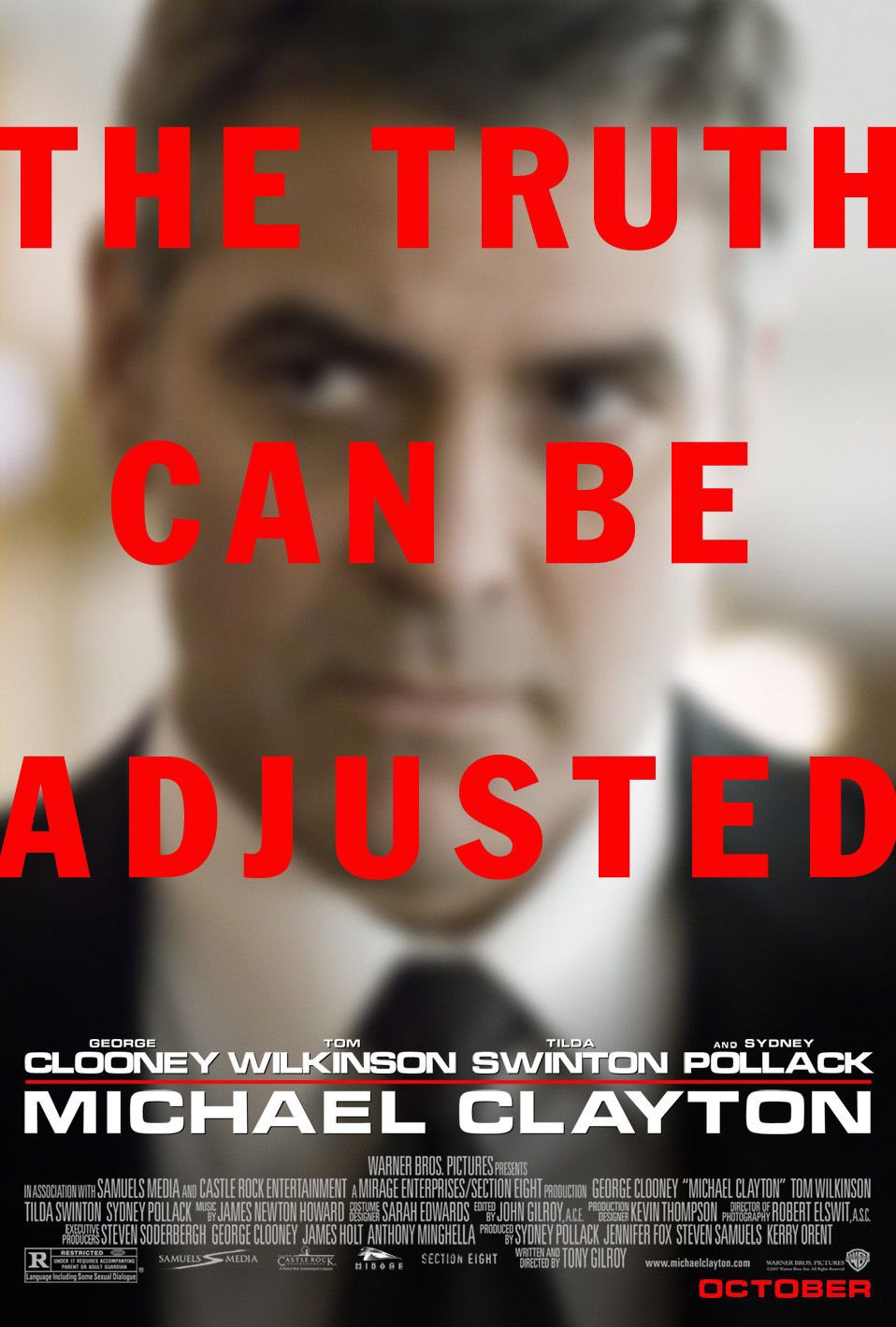 I can’t hear the title of this film without thinking about the football player (at time of this writing, a wide receiver for Tampa Bay). Of course the movie has nothing to do with the sport of kings, but a movie titled Ozzie Smith or James Worthy would also distract me from the point at hand. This film is, rather, about corporate scandal and the legal system. I think that’s what it’s about on the surface at least. Ultimately it, like so many other decent movies, is a character study about a flawed individual who must weave his way through trials and tribulations and come out the other side a different human being. In this case our protagonist is one Michael Clayton (duh), played admirably by George Clooney. Clayton is an attorney, but does not actually go through any actual law trials per se. He is, instead, the “fixer” at a very powerful law firm.

What is a fixer, you may ask? He’s the guy that does clean up before and during a trial. He’s the guy who knows guys who can pretty much get anything on or for someone. He’s really a glorified errand boy with a knack for understanding situations. And Clayton is that guy.

In this case his assignment is to go wrangle one of his law firm’s top lawyers who has just gone completely insane (complete with nudity and ranting) in the middle of a deposition on a huge class action suit against their client, a big agricultural company, U-North. The suit has been going on for some time, and is in its waning days, and this lawyer’s freak out could cost the firm the case. The problem here is that the lawyer, while off his bipolar meds, has had a crisis of conscious and feels that by defending this massive company against poor, sick farmers he is killing his soul. Plus the fact he feels he’s uncovered the smoking gun against the company, and has been secretly working against the firm with the plaintiffs–unbeknownst to everyone in the firm. It’s Clooney’s job to pick him up, talk him down, make him take his meds and make him once again presentable (and explain away his rants against the company, the public nudity and everything else).

It’s clear Clooney provides a vital role to the firm, but that they take advantage of him, and he (for reasons we don’t understand at first) goes along with everything regardless of how trivial the task seems. We soon find out this is a broken man with some serious issues. He’s divorced and behind in his support pay, a recovering gambler and drunk and in deep with a loan shark who is lookin’ for the money his brother leveraged for a failed partnership in a restaurant. So while his job is to be smooth, organized and in control, his personal life is an utter and complete mess. And now even his job is falling apart. The lawyer he is sent to wrangle escapes from the hotel where he has him stashed and has gone rogue. The firm freaks out. The client freaks out. Tilda Swinton, U-North’s general counsel, gets shaky and sweaty and panicky because she realizes the rogue attorney has an incriminating document that he can use against U-North–and she has no idea what he plans on doing with it. So she gets some guys to take care of the situation. The document eventually makes its way to Clayton, who then realizes that everything his friend, the rogue lawyer, told him was true, and that their client is covering up a huge problem. And, with that, he becomes the target of U-North and Swinton’s scorn.

The nice part about the film is the little subtle things that make it not your typical corporate espionage or John Grisham-type movie. For instance, there is a fantasy book that Clayton’s son reads, which he urges everyone he talks to to read, even giving a copy to his father at one point. He happens to talk to the rogue lawyer on the phone (he and his father are actually friends), and tells him about the book as well. When Clayton roams through the lawyer’s apartment at one point, he finds the book (which he recognizes), and in flipping through it quickly skips past a page that has a woodcut of three horses standing on a hill near a tree. It’s a quick flash, but it’s there. And we remember the quick shot at the beginning of the film of Clayton standing on a hill with three horses. That scene doesn’t reveal itself until the end of the film, but using the circular narrative style really makes an impact and ties together Clayton’s love for his son, his son’s philosophy based on his love of the book and what eventually becomes Clayton’s moment of clarity and subsequent escape from his situation. I know the cool scene with the horses smacks of artsy film drivel, but I think it’s something that makes the film extraordinary and different in its approach.

This is a damn good movie for a first time director, although he did write the screenplays for the Bourne trilogy (as well as this movie). It does help to have some of the best actors around in your film, of course. Add a little humor here and there, mix up the typical twist a little bit and make the thing timely and you have a hit on your hands–if not commercially, at least critically.