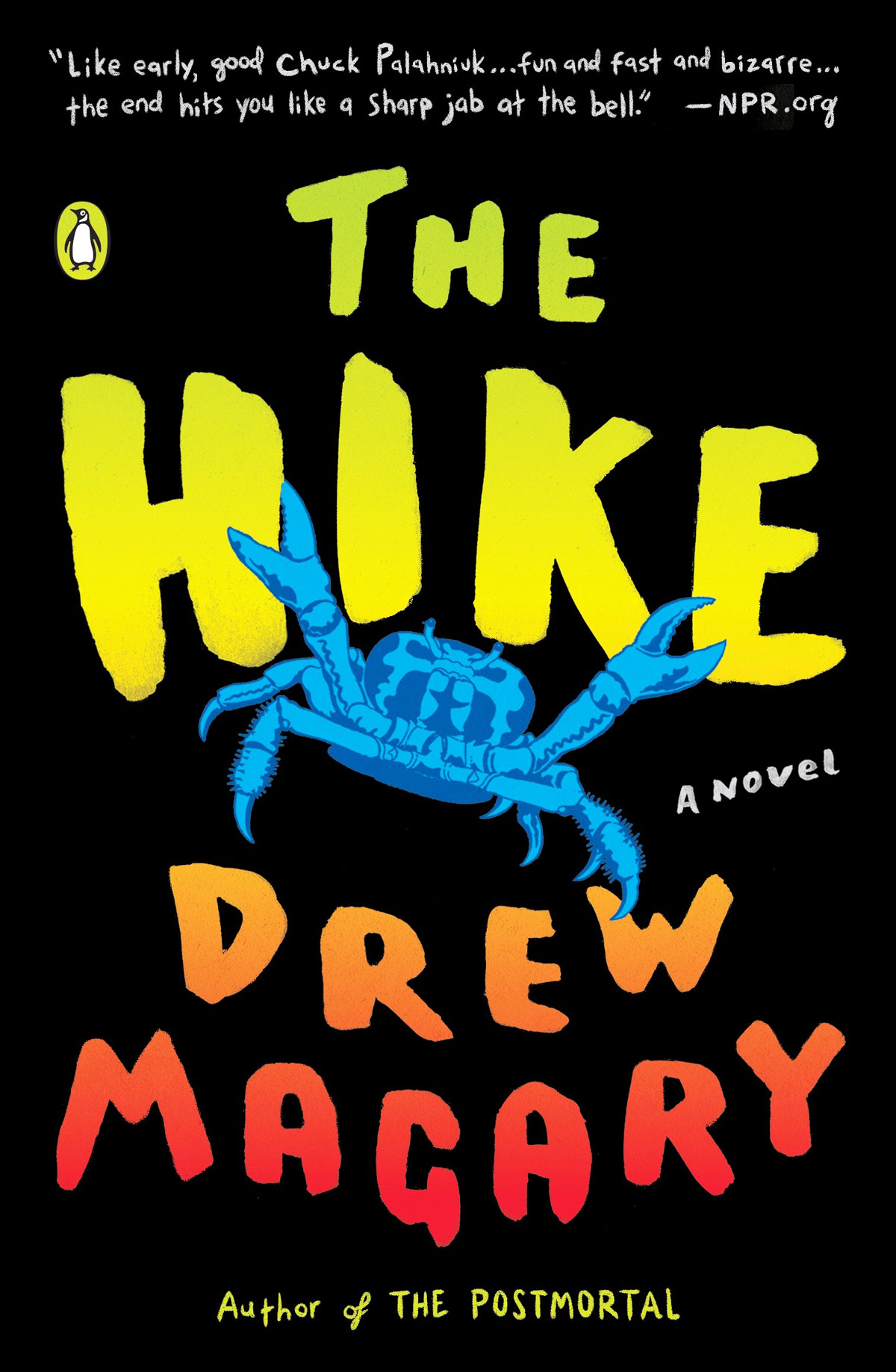 I gotta say that I didn’t quite know what I was getting myself into with The Hike. I thought it was going to be like a Carl Hiaasen book. Even though I’ve never actually read a Carl Haissan book. But, in retrospect, I think it’s mostly because I understood there was some humor in this novel and, like most of Haissan’s novels, has a water-living creature on the cover. But the novel was nothing like that at all. It wasn’t funny. I wasn’t full of hi-jinx or wacky characters and slick dialogue. Nope, it’s like a straight-up fantasy novel with giants and magic beans and shit. Which makes it sound like it’s Jack and the Beanstalk, which it isn’t. Not quite.

Instead it’s a tale about a regular family dude named Ben who travels from Maryland to a mountain retreat in Pennsylvania for a work thing. He goes for a hike before dinner and finds himself on a path that he can’t leave. A path that leads him on all sorts of surreal adventures. There is very little rhyme or reason to what happens to him along that path, but maybe that’s the point. Needless to say, he ends up meeting a talking crab who talks a lot of shit. He is the only “funny” part of the novel. Otherwise, it’s basically the author trying to figure out new and weirder ways to torture Ben. There are giant insects, the aforementioned man-eating giant, dwarf battles, demons, delusions and all sorts of rando magic.

The metaphor of “The Path” isn’t lost on me, but the mechanism makes the whole novel feel like one of those video games where you have to pick up object a, break it with object b, pour object c on object d and climb the invisible rope behind the hidden bookcase to get to the next screen. But in this novel, it seems to be either Ben’s dumb luck or The Path’s rule that as long as he stays on said path, he won’t die and it’ll eventually gets him to the next stage. Where there is inevitably some table filled with all sorts of fancy food and things to drink. Like those ammo packs that always seem to crop up just when your shotgun runs out of zombie-killing shells. It works in video games, but is less convincing in novel form.

Magary is certainly creative with his world building, but the issue is that there don’t seem to be any rules to the world. Because the world just keeps changing from challenge to challenge. A random time-traveling Spaniard from the distant past shows up at some point and seems to speak perfect English. Two men with no construction experience build an entire castle. Time and space don’t seem to follow any sort of philosophy. Again, it’s fine if the world Ben is traveling through changes and is diverse in its landscape and inhabitants. But when things all seem random, it makes it feel like the writing is random as well. And that makes Magary’s narrative feel a bit bolted together. Like he wrote a bunch of scenes he liked and then just threw scraps of paper in a hat, drew them out and stuck them together.

That all said, the book is kind of fun. It certainly has peaks and valleys, but overall it reads pretty quickly and is certainly entertaining. It’s a little unclear why Ben is put through all of these trials. I’ve been thinking about it, and I truly can’t figure it out. He wasn’t a bad dude from what I can tell. He didn’t like murder puppies or traffic humans or anything. So why bring the dude to the brink of death several times, absolutely torture him and drive him to the edge of insanity just to teach him a lesson that he seemingly didn’t really need to learn? All put together by some shadowy entity called “The Producer.” And who is this Producer and why and how does he/she do this? It’s never really made clear. And, yes, the ending is actually decent, all things considered. Granted it’s an ending that sits on a somewhat shaky basis. It’s a weird mashup of a book. But one I’m glad I read if for nothing else than to avoid another book about alcoholic fathers.