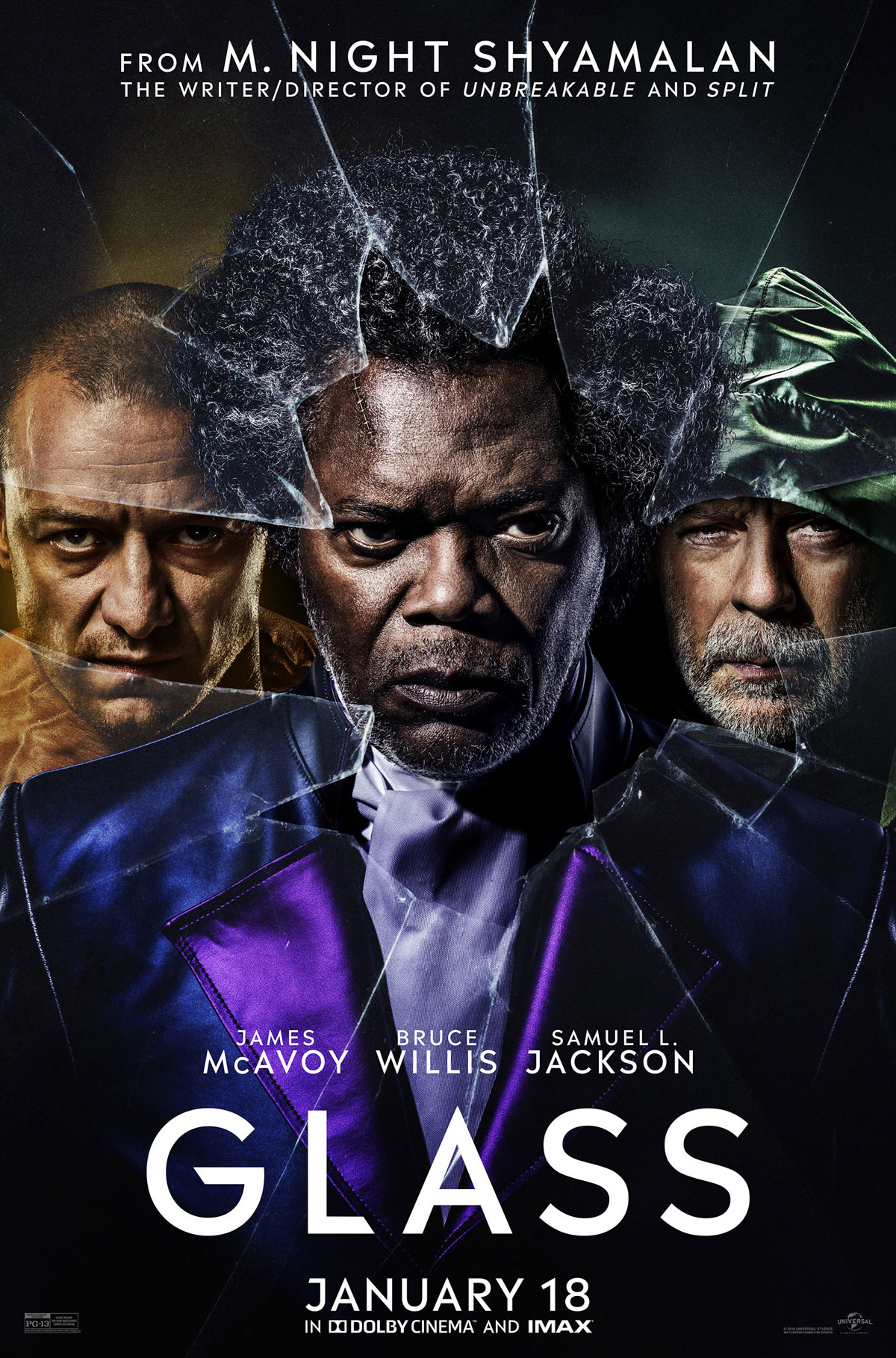 God only knows what possessed me to want to finish this Shyamalan trilogy. I alone seemed to like Unbreakable back in the day. And then finally got around to seeing the second in the series, Split, only a few months ago. It was okay. So if we look at the trending, this third film, Glass, had to kinda suck. And guess what? It kinda sucked.

And then sixteen years later came Split. Which I don’t think I had any idea was tied to Unbreakable in any sort of way. Aside from both of them taking place in Philly — which is where most of his films take place — there seemed to be very little connection. Split is a movie about a dude with multiple personalities and is basically just an acting platform for James McAvoy to do a bunch of different voices. It’s a weird movie that has a horror movie plot, but none of the gravitas it thinks it has.

So along comes Glass in 2019, which is hailed as the final film in a trilogy that I can’t imagine was ever intended to be a trilogy. They just took a couple of the characters from Unbreakable, David Dunn (Bruce Willis) and Elijah Price (Samuel L. Jackson) and stick them in a film with two completely unconnected characters from Split, The Beast (McAvoy) and Casey Cooke (Anya Taylor-Joy). I suppose Shyamalan thought these were beloved characters and bringing them together would somehow make everyone squeal with delight. I think he misjudged people’s connection with any of them.

The plot here is non-existent. Basically this shadowy organization throws The Beast and David Dunn into an institution with Mr. Glass, who’s been languishing there for what I have to assume is nineteen years. We then get to watch as Mr. Glass — whose super power is just being really smart — manipulate the workers in the institution and the other two high-profile prisoners. Meanwhile, Dunn’s son is trying to get him out of there and Glass’ mom is visiting him and Casey Cooke is exploring her relationship with The Beast. All the while the institution’s psychiatrist is trying to convince all three of them that they have no special powers despite evidence to the contrary. That’s pretty much it.

The smallness of the film makes it feel like more of a vanity project for M. Night than something that had the support of a large group of rich studio execs. It’s clearly a low-budget affair. Twenty million according to the Internet, which in this day and age is practically a small indie film. And I imagine the vast majority of that money went to its three stars. Because it certainly doesn’t show up on screen. They even set up this big ending that sounds like it’s going to be a huge set piece, but it never actually happens. Which, honestly, is fine. But makes me wonder if the original intention of the final showdown was meant to be bigger and crazier, but all they had money for was the shootout in the parking lot outside the hospital that it becomes?

One of the biggest issues with the film is Willis’ character. When you think back on Unbreakable, he’s kind of this taciturn dude with not much of a personality. The interesting part of his heroism is the fact he’s this blue collar type superhero who isn’t overly smart or remarkable and is resistant to his powers. In this film, they have seemingly dumbed him down even more and made him almost catatonic in his reactions. Mr. Glass gets all the lines and all the humor and Dunn is just kind of this outline of a character who does next to nothing, says little and is kind of a throw-away. As if M. Night wasn’t quite sure what to do with him twenty years on. But without him there is no trilogy. Which, honestly, would have been just fine.