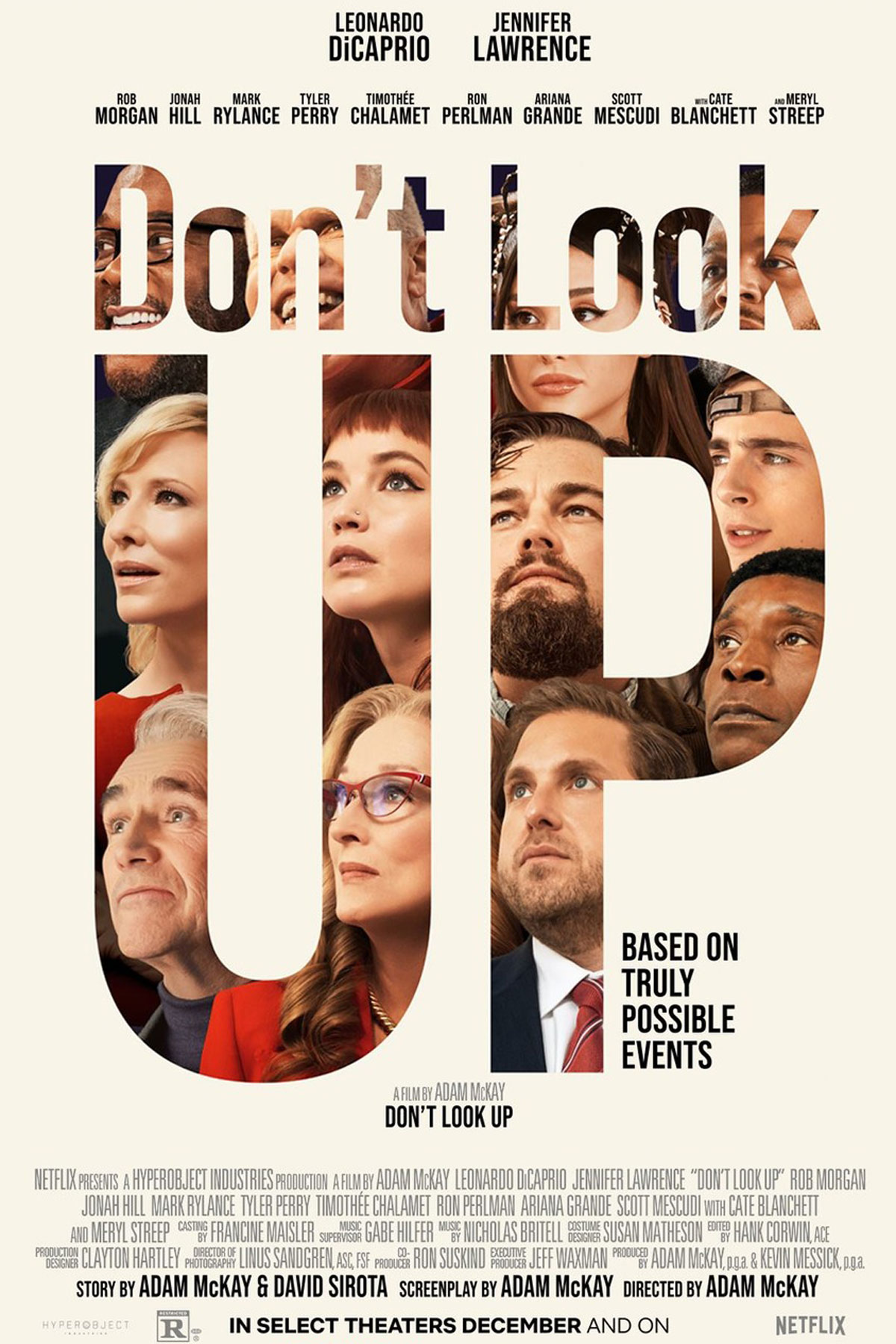 It’s difficult to look at something with the potential of Don’t Look Up and realize that there’s no way it’ll live up to it. After all, it’s super-difficult to do political satire. You have Wag the Dog and, uh, Bulworth and, well, it mostly goes downhill from there. I mean, even Bulworth is a total cringefest. It was 1998, and I think they actually felt it was okay for Warren Beatty to rap. You get the idea. This isn’t that bad, but it definitely tries to tackle some of our favorite modern issues — gaslighting, science denying, tech-god genuflecting, god-god genuflecting — couched in what I suppose we could call comedy. Unless comedy is implied in the term satire? Let’s say yes.

But the idea here is that two science-types at Michigan State, Dr. Mindy (Leonardo DiCaprio), and Kate Dibiasky (Jennifer Lawrence), discover a comet that is going destroy the earth in six months. A world-ender. Mindy is your typical bookish science nerd with a family and a love of astronomy. Kate is a weird goth chick or something trying to earn her PhD. who also loves science, but looks — in Jonah Hill’s character’s words — like the girl with the dragon tattoo. So the two of them raise the alarm and are whisked away by a dude from NASA’s Planetary Defense Coordination Office to the oval office to tell the president. Who is played by Meryl Streep. And she’s a complete asshole. Kind of a mix of a George W. and a Trump type, I suppose. And her Chief of Staff is her son played by Jonah Hill and he’s a total idiot douche. So, like a mashup of Jared and Don Jr. But together they essentially downplay the scientists’ findings, belittle them and either don’t understand the repercussions, or don’t care. Which, of course, makes Dr. Mindy and Dibiasky insane. Completely incredulous. So they go public with it.

And so starts the story. There are comet truthers and every side looking to take advantage of this otherwise terrifying story. Including this nonsensical morning talk show host played by Cate Blanchett who, for some reason, is really into Dr. Mindy and starts an affair with him and is just a confusing and kind of dumb character that has no real impact on the narrative other than to cause a distraction and wedge between our scientist duo (and his wife, the always-sad Melanie Lynskey). Otherwise, this is where we get the “don’t look up” from the movie’s title, as the president makes it her campaign slogan. In other words, if you don’t look up, you won’t see the giant comet streaking towards the earth. And if you don’t see it, it doesn’t exist. It’s gaslighting to the nth degree.

And the thing is, this narrative is initially funny and makes sense, but then they just junk it all up by adding in a bunch of other stuff with this combo Elon Musk/Mark Zuckerberg-like creepy tech dude who creates his own plan for the comet in conjunction with the president, and the whole thing just gets kind of too surface and stupid. This is the delicate balance with satire, I guess. Do you go absurdist or do you go subtle and “smart?” Don’t Look Up couldn’t seem to decide which way to go, so they just kind of threw everything at the wall, what with the obvious nods to Trumpist blind allegiance to obvious lies, climate denial and just the kitchen sink of dumb shit. Whatever the case, the whole thing goes too wide rather than going deep, which makes it feel fleeting. A very obvious indictment of the previous administration, but not necessarily an investigation of the human psyche and why we do what we do. Which is what the best satirical material looks at. It’s a general audience message with an obvious Hollywood POV. And it’s unimpressive.

That all said, Leo is really kind of settling in to his career second act as the fading beauty. He still has the Leo eyes, but the rest of him is all paunchy middle-aged dad. His energy is no longer that twitchy exuberance. He plays tired really well. So when he does his freak outs, they are next level. Honestly, other than him and the always edgy Jennifer Lawrence, most of the other performances are throw-aways. Jonah Hill playing his usual smart-ass is a decent quip machine for ten seconds here and there, but with the exception of the very, very odd Mark Rylance performance as the dude from The Good Doctor-like tech magnate with a weird set of dentures and a not-great rubbery makeup job, not much is memorable.

So, was it worth a watch? I mean, sure. I’m bored. You’re bored. My standards are super-low at this point, but it doesn’t mean I can’t complain about free shit. It just felt like such a waste. When you have all these amazing actors and that sweet, sweet Netflix money, why not take the time to be smarter about stuff? To give those actors something juicier to do? Something a bit more timeless and less what ironically felt like a social media swing in the post-Trump times? Like they needed to hustle it out before we forgot a bunch of brainless insurrectionist Americans tried to overthrow their own government with bear spray and zip ties. But, to be fair, America mostly shrugged and we moved on.