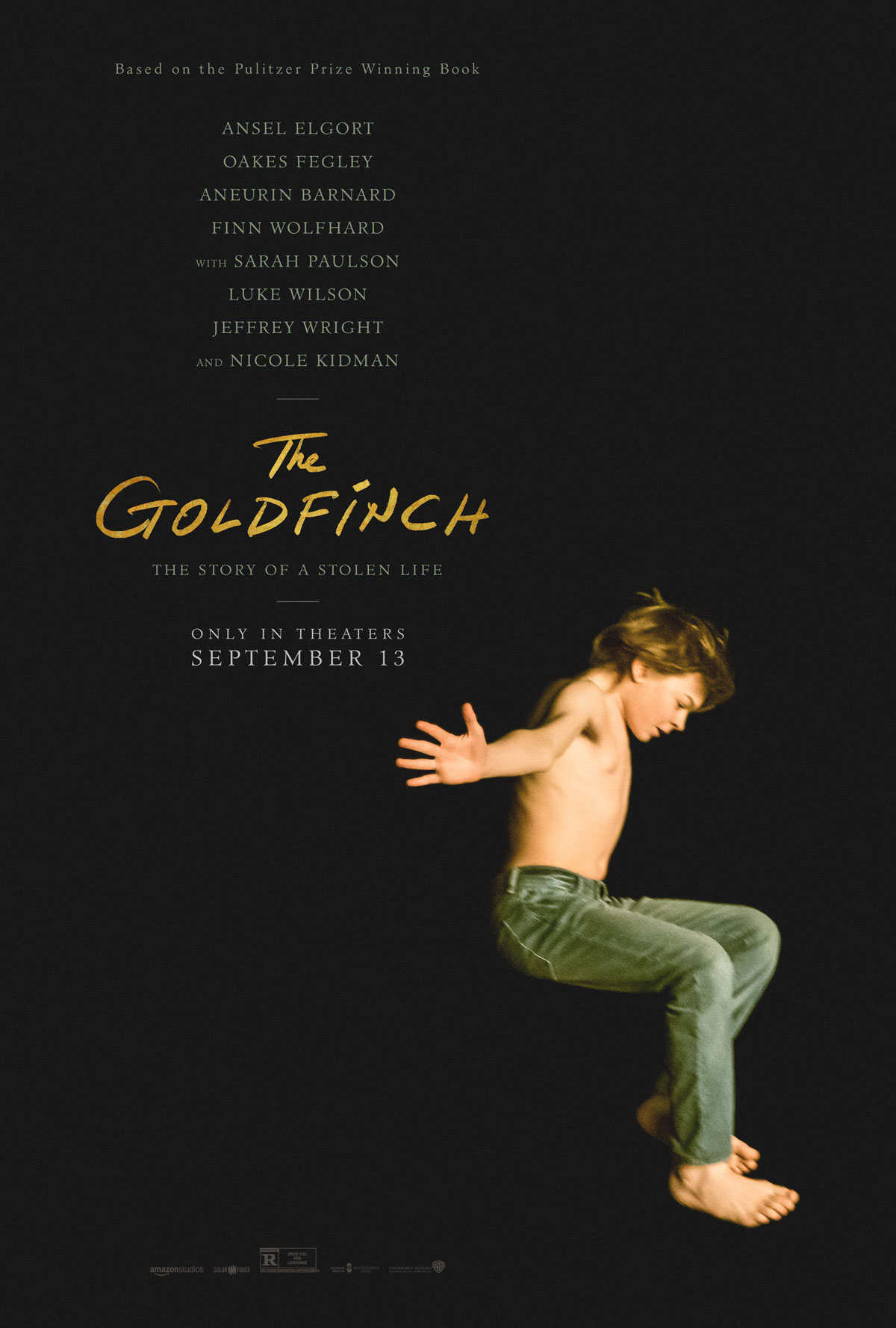 Ms. Hipster read The Goldfinch some time ago. So did like half the planet. It seems, on the surface, like something I’d enjoy. But she and almost every review I read about it warned that the book is really good and then kind of nosedives and becomes something different. If I’m to invest my time in an 800-page book, I need unanimous praise and undying love. I read Infinite Jest pre-Internet and nobody I knew had read it, so I didn’t know what I was getting into beforehand. Now, with the Internet, I have a deep record and infinite takes. I have choices. And I choose to spend two and half hours on an airplane watching this tale rather than two months struggling to stay awake on a train reading a novel I know will ultimately disappoint me.

Of course The Goldfinch, the novel, won the 2014 Pulitzer Prize for fiction. And the film was a box-office bomb and currently hold a 24% approval rating on Rotten Tomatoes. So, better than The Emoji Movie. But, you know what? Screw Rotten Tomatoes. I didn’t hate it. Certainly not 75% hated it. Did it have its issues? Oh yes. Was it even the worst movie I’ve seen on a plane in the last couple months? No it wasn’t. And, man, it engrossed me enough to get me more than half way home from Puerto Rico. So, as a distraction, it is a great watch.

But how does it do in the wilds of the real world? Well, even on a tiny seat-back screen, it’s clear that it’s a really beautiful-looking film. Its scenes of New York are lovingly crafted. The interiors are designed and decorated to within an inch of their lives. Everything seems very well considered. So, as a piece of art, it’s very… pretty. The irony here is that this piece of art is based on a piece of art. A painting. A real-life painting of a goldfinch that is chained to a birdhouse. It’s a metaphor, as we’re supposed to understand, of main character, Theo’s (Elgort), life. Though I’m not certain the film’s writers did a wonderful job of tying that together. And therein lies the issue: the connection between everything that happens to this central character never really comes together.

I think you know the plot here. Theo is a kid living in NYC. He goes with his mom to a museum and there is a terrorist attack in which his mom and a bunch of other people are blown up. In the chaos following the explosion, he makes off with a painting: The Goldfinch. We then see him grow up, become an antiquities dealer, a drug addict and a dude who is seriously haunted by the death of his mother. The movie itself skips back and forth in time in order to fill in the holes between the attack and current day. Solving the mystery about why he took the painting and how he ended up being who he is. It’s mostly well constructed, though even at almost 180 minutes still leaves us with a bunch of open questions and vagaries. Thus the problem with adapting a very long novel.

So, I’m trying to get to the reason critics seemed to hate this movie so much. It looks good. The acting is decent. Save maybe Luke Wilson as Theo’s scumbag dad. And, dare I say, Sarah Paulson as his scumbag stepmom. They felt like they were in a different movie. Perhaps it was the writing, the setting or the acting, but almost any and every scene with them seemed out of place. Yeah, with Wilson, he just seemed too, uh, Luke Wilson-ish. And I can also see how people (including myself) really disliked the way their whole arc was wrapped up. It ends abruptly and confusingly. The entire narrative around Theo and his dad just feels like a way to get young Theo (Fegley) and his Russian friend, Boris (Wolfhard), together. Also, the name Boris… Feels stupidly Russian.

Beyond this long swath of the film, there are other elements that probably pissed off critics. Really important plot points feel like throw-aways. The death of what is an early-on main character is communicated in one garbled line in a meeting on a street. Coincidences abound. Chance meetings in a city the size of NYC seem to be common place. And that drug addiction of Theo’s. They allude to it — and even show it sometimes — but it’s unclear what the consequences or effects of it are. Snd why he keeps his drugs in a locked storage unit. I imagine that was explored more in the book. Also — and you would only catch it if you were paying attention — the relationship between Theo and Boris when they are teens seemed like more than it appeared in the movie. Again, they sort of hint at it, but it’s pretty unclear what’s up. Again, I have a feeling the book is more, uh, detailed.

And then there’s the “twist.” Not like an M. Night twist, but one that is at the heart of the film. One surrounding The Goldfinch itself. And if you’re already pre-disposed to dislike this film, that one may be one head-slapping moment too many. Or — and I swear I’m almost done with the negatives — maybe it’s the weird tonal change in the fourth act that is what I imagine also confounded readers of the book. A movie that is one part art film and one part family drama all of a sudden turns into a Jason Statham movie. Like guns and running and all sorts of stuff that is incongruous with the rest of the film.

And then it just kind of ends. There’s some talking and then the credits roll. I mean, they make a point sort of and then we have not even a second to absorb and then the music swells and we’re left feeling pretty unfulfilled.

So that’s why the critics hate it. Or why I assume they hate it. But, as I said, I was watching this for free on a plane. And I didn’t hate it. Sure, I see all of its faults. I see so many places where it could have been better. Where it could have connected where it didn’t. Where it could have zigged when it zagged. Where they could have played out certain sections over others. But I didn’t hate it. And, honestly, probably could have survived a six-part mini-series, which would have given this reasonably complex narrative room to breathe. There’s a reason this thing won a Pulitzer, but it just doesn’t quite stick the landing on the filmed front. It feels clipped and incomplete. Its surface beauty is only given enough altitude to be skin deep.