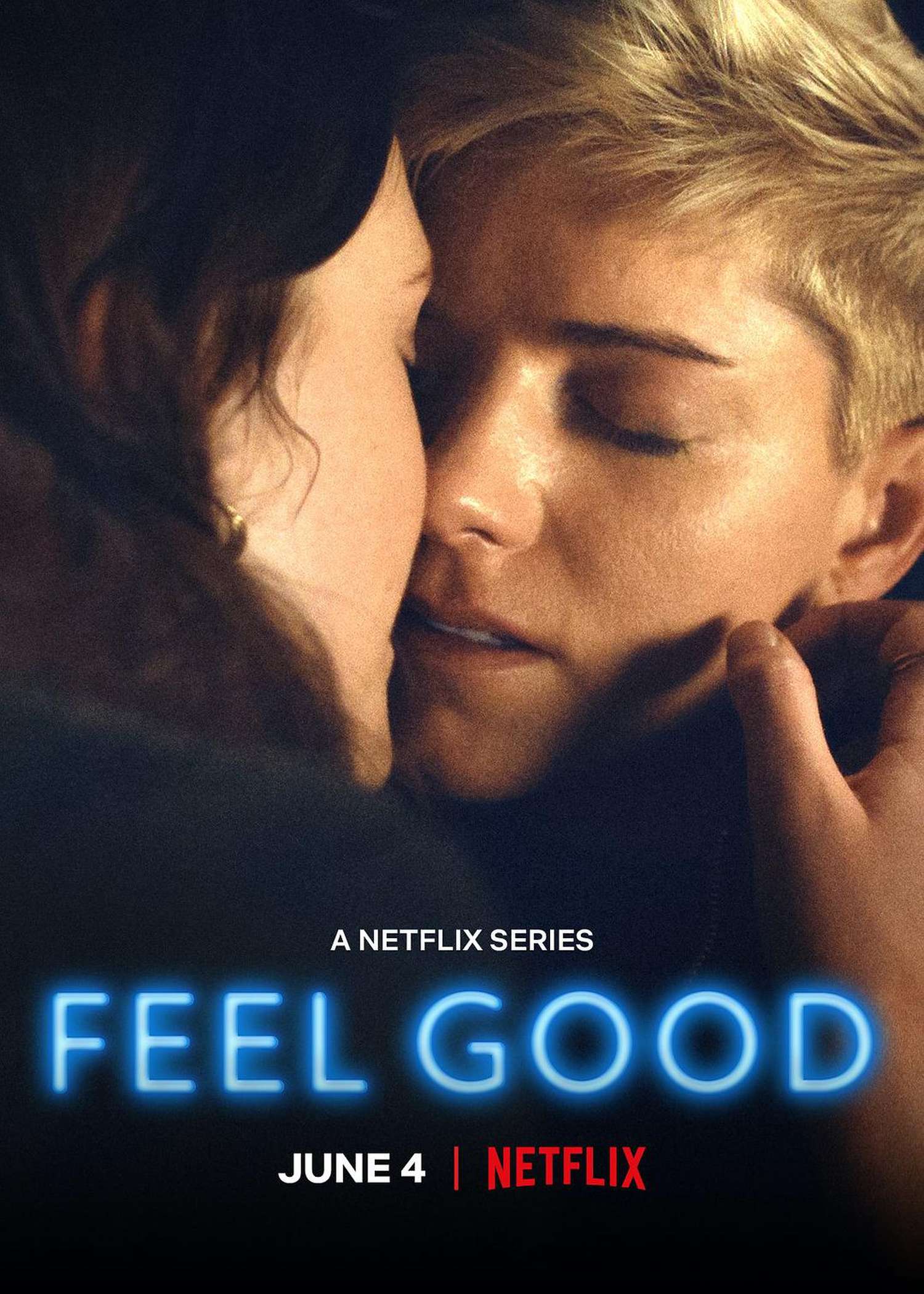 This was definitely a different one for me. Feel Good doesn’t involve any murders, multiverses, mysteries or even a mild plot twist. Nope, it’s like a straight-up relationship dramedy starring a stand-up comic, Mae Martin, as she manages her struggling career, her struggling addiction and her soon-to-be struggle to maintain a relationship with a nice British lady who is resistant to coming to terms with the fact they’re even in a relationship. Or say it out loud, at least. And all of this is a somewhat autobiographical tale about Martin’s actual life experiences. And I’ve already confused you.

The first thing I’m going to get out of the way is my ignorance about sexuality, gender and relationships therein. I’m a straight cis male, and watching a show about a person in Martin whose fluidly over the span of the series is probably way beyond my vocabulary to not fuck up. Part of my hesitance to even describe what happens over these two seasons (12 episodes) of television is Martin’s own journey of self-discovery over that time, realizing that maybe she doesn’t identify as a woman or a man or either. She even asks at times how others see her. “Do you think I’m a boy?” I feel like she asks several times when a person accidentally misidentifies her as “sir.” I’m not certain she ever picks a pronoun, but I believe Martin herself goes with they. So I should probably do that.

Alright. Martin is Canadian. Did I mention that? Yeah, man, like super-Canadian. Everything from the accent, to the kind of twee mannerisms to the Canadian nice is just soooo north of the border. The show itself is set in Manchester, England. Which is weird. I mean you’d expect it to be in London, but no, it’s in Manchester. Which is like someone looking to be a stand-up and moving from Toronto to Pittsburgh. Why? I have no idea. But placing it outside of the “big city,” the whole show has a much more, uh, cozy feel. A smaller community. A community where Martin and their Canadianess sticks out even more than it might in a large metro area. Martin has a gig at a local comedy club doing a nightly routine and generally lives hand to mouth on the couch of another comedian at the club. Until they meet George (Charlotte Ritchie), a woman who, up to that point, had only dated men. They become fast friends, and after a whirlwind romance, Mae moves in with George. It’s a win-win on the surface.

It’s one of those things where you fall in love first and then, only after committing, start knowing and understanding your partner’s backstory. Turns out Mae is an addict. A thing that George doesn’t understand and doesn’t know how to handle — though she certainly tries. And George isn’t willing to come out to her friends. A thing that Mae can’t understand — but also tries to deal with. With varying degrees of success. Also, and I assume this is Martin’s actual personality, she is super ADHD. Like wide-eyed and flitting from one topic to another, constantly energetic and, frankly, a little twitchy. Definitely one of those personalities where there’s probably not a lot of impulse control. But also some underlying sadness. Which we find out about later. While George kind of plays the typical repressed British person with douchey friends and cold, oddball parents.

The show then follows the two characters as they come to terms with their relationship, past trauma and secrets they don’t tell each other until after they come to light. There’s some funny stuff — Martin is a stand-up after all — but it’s mainly an examination if a modern relationship. Granted, Martin often relates to serious issues with the typical sarcastic responses to deflect the seriousness. But like Canadian sarcastic, which is way more pleasant that American or British sarcastic. Martin’s character is a lot. She talks and talks. And is intense in a very specific way that’s hard to explain. It’s an intensity that others point out to them several times during the series. Not to mention the giant eyes and coiffed blonde hair that never seems to change or move at all. Another thing that I was thinking, but another character voices out loud about Martin.

There are a couple interesting things at play outside of the main storyline. Martin is a stand-up, but in the clips we see of them actually doing their act, they don’t seem particularly funny. I’m uncertain if that’s intentional or not, but their brand of observational humor is either dumbed down to make it clear she’s a novice in the series, or maybe the actual Mae Martin’s stand-up just isn’t meant to be like ha-ha funny. There are nights where Mae is supposed to have an off night, so that’s understandable, but generally we see them bombing. Or turning their anxiety and anger (though, again, Canadian anger) into a diatribe more than an actual routine. There is some commentary about how they may be appealing just because they’re “of the moment” in their fluidity and non-binary thing. But even when they’re offered an opening gig on a large-ish tour, it’s unclear it’s because of the actual act or because of being who they are. There are also some themes in here that true humor and storytelling can only come when one bares their soul and keeps it real. A theme that is similar in some ways to another recent female-led stand-up show in Hacks.

So, is Mae Martin a real actor? Yes and no. It feels a bit like Jerry Seinfeld on Seinfeld. You take this person who is engaging in their own way and surround them with professionals and it hopefully raises their game. It’s pretty evident that Jerry was like “I’m just gonna do my thing” and his thing just kind of became endearing. His lack of polish. His awkward inability to look toward the right camera and seeming distain for eye contact and delivering a line without a shit-eating grin on his face. It became its own thing. Martin’s performance is a bit like that. I mean she’s better than Jerry — after all the show mines way deeper themes — but I wouldn’t call her range incredibly varied. There’s a warmth missing there that a more experienced actor may have brought to add to the depth of emotion. Instead Martin is all raw nerves and kind of a Canadian 10 at all times. Like it would be surprising to know if this character ever slept or even ate anything. Granted, this is not a person you’re surprised absolutely loves cocaine. That all said, Martin is an incredibly memorable person. Their look and oddly foreign, yet familiar, delivery is engaging as hell.

I think it’s good for everyone to watch stuff that is outside their normal sphere of influence and understanding. This ain’t Catastrophe, or even Fleabag. Those are both decent shows that deal with addiction and relationships in England, but are still way more relatable for folks like me. In a lot of ways this series is a lot more modern, a lot more fluid in its own right than most of these types of shows I’ve seen. It just set no preconceived notions about what a relationship is or should be. And it’s quirky and ribald. I imagine it’s not for everyone, but do feel that for a certain audience, it’ll hold a Fleabag-like reverence. Again, I’m not certain I’m that audience, but I did find it endearing and definitely valuable as both a sociological and entertaining undertaking.