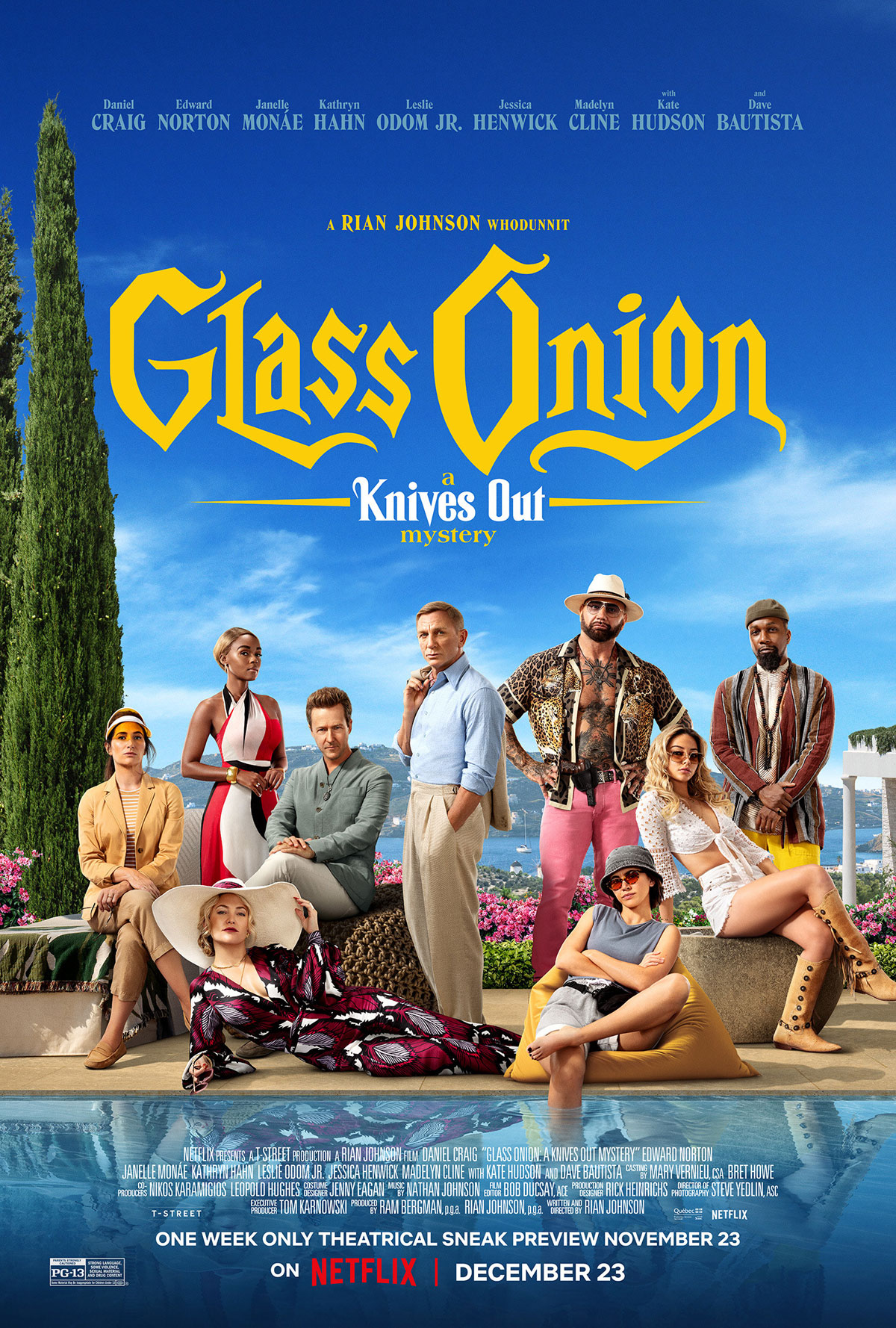 Glass Onion: A Knives Out Mystery

Can we call Knives Out a franchise at this point? I mean this isn’t a sequel. And it’s not quite an anthology. So I suppose it’s Daniel Craig just helming another franchise like the 007 films? But instead of an international British spy, he’s a weird Southern dandy private dick named Benoit Blanc. A character, frankly, that I don’t get even one little bit. They tweaked his character from the first Knives Out movie, confirming his sexuality (he lives with an aproned Hugh Grant) and seemingly gave him an even more inexplicable Bayou accent of some sort that I imagine partially exists to obscure his rather thick English accent. This is all to say that it may be a wee bit of an issue if the biggest mystery in your mystery story is the anchor character to your franchise. He makes no sense, and neither does the whole “mystery” in this Knives Out mystery.

So, instead of giving us a fleshed out character study, or even a compelling mystery, filmmaker Rian Johnson relies on overwhelming us with visual stimuli. Which I suppose in a relatively vapid piece of eye candy is just fine. Because if you set your film on a beautiful private Greek isle and have amazing beauty shots of a glowing Janelle Monáe standing in the sun, you’re half way there. Seriously, the film should have just been two hours of her talking in different outdoor scenes. But, alas, there must be some narrative in these mystery films. And this one is literally Clue. Which I think must be on purpose, since Benoit Blanc talks about the game at one point in the film and mentions how he despises it. So maybe this is some sort of “funny” ode to the movie/game? Or perhaps it’s just lazy writing? We’ll never know.

But, like Clue, several people are summoned to a mysterious island at the height of COVID by their billionaire host, Miles Bron (Ed Norton). He’s an Elon Musk type. Because of course he is. Seriously, though, how many more of these movies/shows do we need to see where the antagonist is some sort of Bezos/Musk mash-up? Anyway, all the folks invited are “friends” of his, which essentially means they knew him before his company, Alpha, took off and are now living off his coattails. They are dependent acolytes. Bron has set up a weekend on his island that involves a murder mystery. But, unbeknownst to him, infamous detective Benoit Blanc has received an invite! Yes, somehow he boards the ship to get to the island and whatnot and nobody makes a peep. Until he rolls up and surprises Miles with his presence. Super unlikely. But, hey, if this movie cared about details, it wouldn’t be this movie.

Shenanigans ensue and someone ends up dead for real. Now… if you know the best detective in the world — who had just solved the fake murder mystery in five seconds flat — was on an island of just nine people, why the fuck would you kill someone? He literally has an almost 15% chance of solving who the murderer is by just spinning in a circle and pointing at someone at random. It’s a blockhead move, and one that — again — makes absolutely no logical sense, But, hey, at least Janelle is there. As Blanc tries to unravel the murder mystery, he skulks around and we are treated to one of those things where we see the same scene from a second angle later on. And, miracles of miracles, people just happen to overhear stuff by absolute coincidence in each and every way possible to make things fit into place. It’s absurd. But, again, maybe it’s supposed to be? Like this is the Clue game / cartoon version of a murder mystery, where it’s fine that everyone is kind of an idiot and everyone who needs to be lucky is lucky and that’s just how it goes? Because if this was a more “serious” version of anything where there was a twist or some sort of spy or international intrigue, it would be skewered for being so dumb and so obvious. Instead, we get technicolor scenery and Dave Bautista in a banana hammock shooting his gun by the pool.

Look, maybe this franchise is supposed to parody murder mysteries. Kind of like Clue or the glorious Tim Conway/Don Knotts detective team-up, The Private Eyes. Because when the person you assume did it did it, it’s not much of a mystery. Honestly, it’s thee dumbest reveal of all time. Like lazy to the nth degree. In fact there’s this random stoner who walks around the island and occasionally walks through a scene who maybe, perhaps is some sort of red herring we’re supposed to track. But, no, I think he’s literally just an actor that Johnson likes to stick in all of his films, and there weren’t any roles available for him in the very small main cast. So he just wanders into frame on occasion for no reason whatsoever. It’s a payday, I guess. This is all to say that the movie is not satisfying at all when it comes to narrative. How can it be when they pull the identical twin trope? For fuck’s sake, dude… lazy! And it’s entirely too long. Daniel Craig’s character deserves some sort of explanation that we never get. And most of the characters are given very little to do. But, yes, it does look nice. The direction is fun. The scenery is fantastic. And it’s great to see Kate Hudson back in the fold. But it’s disposable. It’s a sugar high. It’s a treat that you look back on and realize pretty quickly wasn’t at all worth the calories.