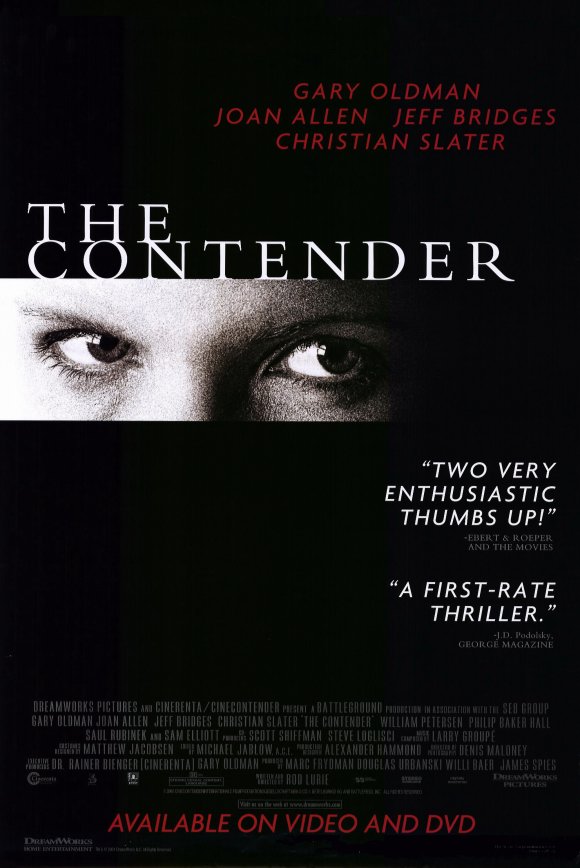 I hate movies that try to club you over the head with their earth-shattering points. The huge sweeping message in this movie is, “there is a double standard when it comes to women and sex.” Really? You’re fucking kidding me! Jeez, I never went to college and saw dudes who slept around given high-fives, and girls who slept around called sluts. Do we really need an entire movie (and a long one at that) to show us this? This flick is horribly disappointing. What starts out as an interesting study in political sabotage turns into this lame message movie about what it’s like being a woman accused of sexual improprieties.

The gist of the story is that the Vice President has died, and the current President (Jeff Bridges) needs to replace him. The frontrunner is Governor Hathaway (Peterson), who tried to save a drowning woman from a river, and is considered a national hero. The President decides that he wants to bring in a woman — basically to secure his place in history as the first President to elevate a women to the position. He picks Senator Laine Hanson (Joan Allen) as the perfect woman candidate. OK, we’ve already started off with a flawed premise. Hanson isn’t the most qualified candidate, just the most qualified woman candidate. The film has already shot itself in the foot. The President and everyone else knows that Hanson isn’t the best choice for the position, but, hey, he wants a woman.

Gary Oldman plays the Republican head of the confirmation committee. He likes Hathaway, and has basically decided to destroy Hanson in committee in order to secure Hathaway’s place in the VP spot. He launches and investigation (as is customary) and unearths some damning photos of Hanson involved in a gang-bang in college. He leaks the info to the press, and of course it becomes a big deal. Hanson refuses to comment on the allegations, despite the urging of the President’s advisors. God, she’s so strong! Next is the fact that she was having an affair with her current husband while he was still married.

Anyway, the filmmakers pretend like Oldman is only leveling these attacks because she is a woman. Trust me, if there were photos of Bill Clinton involved in a gang-bang in college, they would have certainly become public. If he stole Hillary away from her husband (if she had one before meeting him), that would have certainly been news. Oldman just felt that she wasn’t the strongest candidate for the position. The movie tries to show us that the public only finds Hanson’s actions despicable because she is a woman. Gosh, I never heard anybody chastising Clinton for diddling an intern with a cigar. Point destroyed. We’re even given a sense that Hanson isn’t the strongest candidate for the position after her talks with her ex-governor father. So, Hanson is strong enough to neither confirm nor deny that it is indeed her in these pictures (the affair thing is a fact that she does confirm).

We’re kept in suspense until the end of the film whether or not it is actually her in the pictures, but by that time it makes no sense and we really don’t care. I guess it’s noble to not even comment on sex, even if you are innocent of the charges. Say, I’m a woman who is accused of sleeping with the entire Michigan State football team. I know it’s not true, but rather than denying it, I refuse to comment. Rumors about it swirl, and by the end of the semester, everyone thinks it is true and thinks I’m a complete slut. This, according to the movie, helps a woman’s cause? How, especially if I have proof that contradicts the rumors? Wouldn’t it more advantageous to come out and point out to people that it is things like this that can destroy a person’s reputation, and that as a strong woman, we shouldn’t stand for the slander, the lies and the innuendoes? Whatever.

Then, just to make sure you understand that this is a message movie, there is a dedication at the end that reads, “For our daughters.” Give me a break. Anyway, the acting was good. Gary Oldman was his usual over-the-top self, complete with bad bald wig and thick glasses. Sam Elliot plays a great angry guy, even without his trademark mustache, and Joan Allen is, as always, very good. I wasn’t so thrilled with Jeff Bridges’ jerkoff, baby boomer President, who seemed more like a slick stockbroker than the leader of the free world. It isn’t Bridges fault though, as this was the part he was given. It’s just that this movie could have and would have been so much more if it concentrated on the game of political espionage and dirty tactics. I thought just seeing what happens in the confirmation process was fascinating, but they broke that off way too soon to concentrate on this other drivel that makes no damn sense.