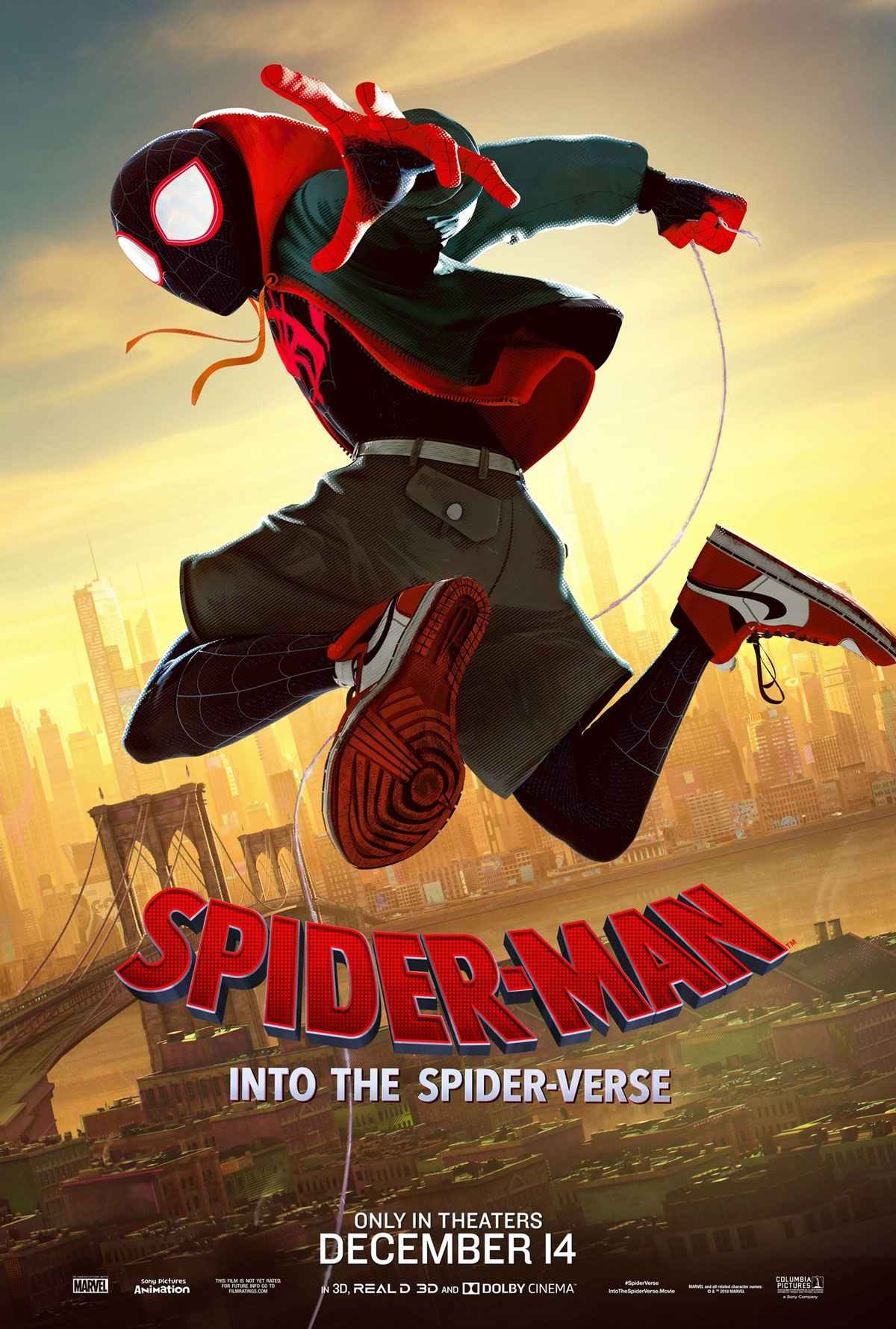 Spider-Man: Into the Spider-Verse

For the forty-millionth time, I will claim not to be a superhero guy. Or an animation guy for that matter. But Hipster Jr. Jr. has dragged me into the world of Marvel and even some of whatever the hell Sony studio hybrid this Spider-Man movie is. She’s seemingly aged out of the cartoon thing a little bit, too, but this one was too much for her to resist. And, honestly, I was kinda of excited as well. Don’t judge.

After all this ain’t your father’s Spider-Man. Or, in this case, her father’s Spider-Man. Reimagined as a modern tale starring modern characters in a diverse New York City that certainly reflects the city way better than any that came before it, it’s pretty awesome to see a film with an iconic character re-cast as an African-American/Puerto Rican kid who feels more genuine in his setting than the golly-jeepers Peter Parker we’re used to. Plus he wears old-skool Jordans. And listens to hip hop. The whole thing just feels fresh and inclusive and manages to avoid the cringey racial pandering that I thought might sink it.

Now, I know nothing about the Spider-Man universe. Not the comic book. Not the extended publishing history. Nothing. My knowledge extends to the old-ass 70s live-action tv show, The Amazing Spider-Man, the 80s animated series, Spider-Man and His Amazing Friends and some movies mostly from the aughts starring Tobey Maguire. So a lot of the world here is complete nonsense to me because they draw from all sorts of Spider-Man lore, including a Spider-Man who is a cartoon pig named Spider-Ham. Which is pretty, funny, but super-weird. The point is, the “Spider-Verse” includes all these alt versions of Spider-Man from across the literal publishing universe since he first appeared in a comic book in 1962. And then some other weirdos who have nothing to do with SpiderMan past, like a 40s film noir, black and white Spider-Man voiced by Nicolas Cage and an anime Spider-Man, who is a young Japanese woman inside a round, Spider-Man-themed robot thing. It’s really out there.

My ignorance aside, the conceit here is that in order to get all of these bizarro versions of the character in one place, they have to open a portal of sorts so that they join this dimension’s Spider-Man, Miles Morales. The explanation for this is kind of yada-yada’ed — or at least makes little to no sense to me. But that’s not the point. The technical parts — and even the bad guy who builds said portal — are kind of secondary to the story of a charismatic kid growing up in a world that seems to have lost a little bit a of hope. Expectations are low for kids like Miles because the odds are seemingly against him. This is demonstrated by the fact that his father — the oddly named, Jefferson Davis — gives Miles his wife’s last name, Morales, so that he doesn’t have to grow up with the low expectations of his father’s last name already on his head. Even though Jefferson outgrew his youthful indiscretions by becoming a cop and dedicated family man.

So, Miles’ transformation into his universe’s Spider-Man involves randomly being bitten by a spider in a subway tunnel. It’s kind of tossed-off, frankly. In fact, most of the plot is nonsense if you think about it too hard. But it is fun watching Miles bumble his way through becoming a superhero. There’s no knowing smile or humble weirdness that’s played up in the other Spidey movies. Miles’ reactions and foal-like stumbles seem more realistic and endearing. Even the pig from the other universe is way more advanced in his superpowers than Miles, and that’s just fine. It’s nice to see a teenager be a teenager (who happens to be able to shoot energy pulses and webs) set to a hip hop soundtrack.

With the superhero thing seemingly in transition with the end of the Avengers series (which I saw) and the shitty X-Men thing (the last of which I didn’t see), it’s good to know there are other directions in which the genre can go. Because I know Hipster Jr. Jr. won’t be able to resist that damned Marvel magic when it comes ’round again.