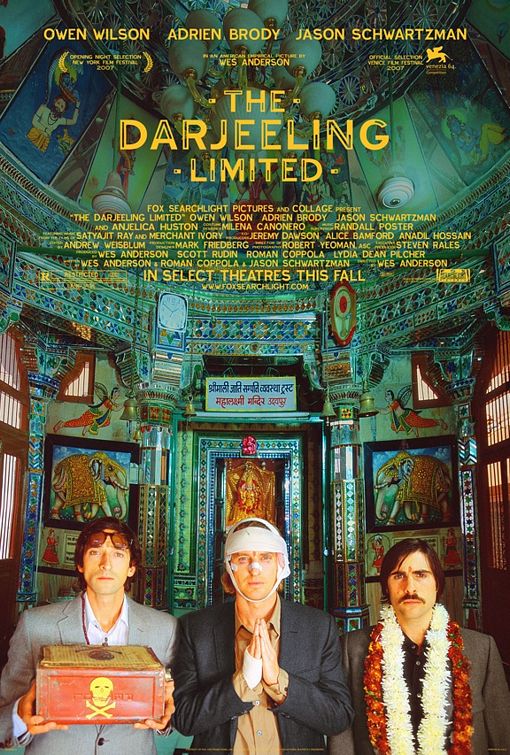 Oh Jesus, I kinda don’t want to write this one. This thing was such a giant disaster by a guy I really like, and he deserves better.

I guess the term “self-indulgent” applies here. At least I think it does, never really understanding that term and its over-usage. I mean what else do you call a film by a guy who clearly fell in love with the idea of filming a movie in India, and then to fill it out grabbed his buddies, gave them silly mustaches and/or facial bandages and just kind of went to town with no apparent plan whatsoever. Or, if there was a plan, none was evident to me.

Cute can only get you so far. That’s kind of Wes Anderson’s stock and trade. He makes quirky, cute films that are awkwardly poignant and look fantastic. I happen to love these kinds of films. He also draws amazing characters that we have rarely if ever seen on screen in anything other than his films. This film had some of his trademarks, but lacked any kind of cohesive energy, direction or point. There were scenes on the train right out of the gate that I literally watched with my brow furrowed trying to figure out what the hell was going on. The conversations just go absolutely nowhere, and feel like they were a draft written by a third-year film student high on mushrooms.

The thing continues, relying on Anderson’s typical juxtaposition of inane nothingness, slapstick weirdness and shocking sorrow. Although, in this case, the sorrow rather than feeling like something out of a John Irving novel smacks of a plot device that comes out of nowhere and really has zero impact. The whole movie just strikes a false note and relies on this strange repeating theme of starting and stopping and starting again. There is scene after scene, intentional or not, where the characters go to do something, get stymied, try again, get stymied and then just kind of forget about it and move on. It’s frustrating and kind of annoying.

I’m really trying to find something nice to say about this film other than the visuals, but I’m finding it rather difficult. The DVD version I saw had the short film, Hotel Chevalier, tacked on the front. It too was strange and not very entertaining. Granted, there was a semi-nude Natalie Portman in it, but even that was disappointing. Moving on…