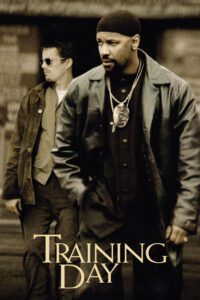 King Kong ain’t got nothing on me! Whatever. Never have I heard such drivel from an Academy Award nominated performance. Shit, any idiot can play a bad guy. Now don’t get me wrong, I think Denzel is a great actor, but this role was just too easy. And too lame. The screenwriter also wrote The Fast and the Furious, for God’s sake. The guy made cartoon characters, not living, breathing people. I was waiting for Denzel to start twirling his handlebar mustache. He’s so damn dastardly!

I’m also not buying Mr. Washington as a bad guy. It’s like seeing Lawrence Olivier play Genghis Khan or something. No matter how hard Denzel tries, he’s not “street.” His look, his words, his swagger isn’t natural. I know this is shocking, but Ethan Hawke’s performance is actually a much better one. He displays a great range of emotion and doesn’t push things too much. Now, do I buy him as a police officer? No, he’s entirely too scruffy and greasy. In other words, he’s Ethan Hawke.

There’s just nothing real about this movie. It feels like it takes place on some Hollywood set where the characters take smoke breaks together between scenes. Cops interact with gang members in unrealistic ways, while Denzel’s larger-than-life cop chews up the scenery from edit to edit. Scott Glenn plays some sort of drug dealer guru, which makes absolutely no sense, and merely adds to the claustrophobic sense of the whole movie taking place inside the pages of a script. Add to that outrageous coincidences that lead to major plot advances, stupid chase scenes and some drawn-out monologues and you have what amounts to as pretty flaccid film. Of course the whole thing adds in a hail of bullets (as always), as the cop-outs continue. I know people like this movie (including the Academy), but I feel like some people are too easily swayed by suggestion in cases like this. Ultimately, the film felt very small and unremarkable.