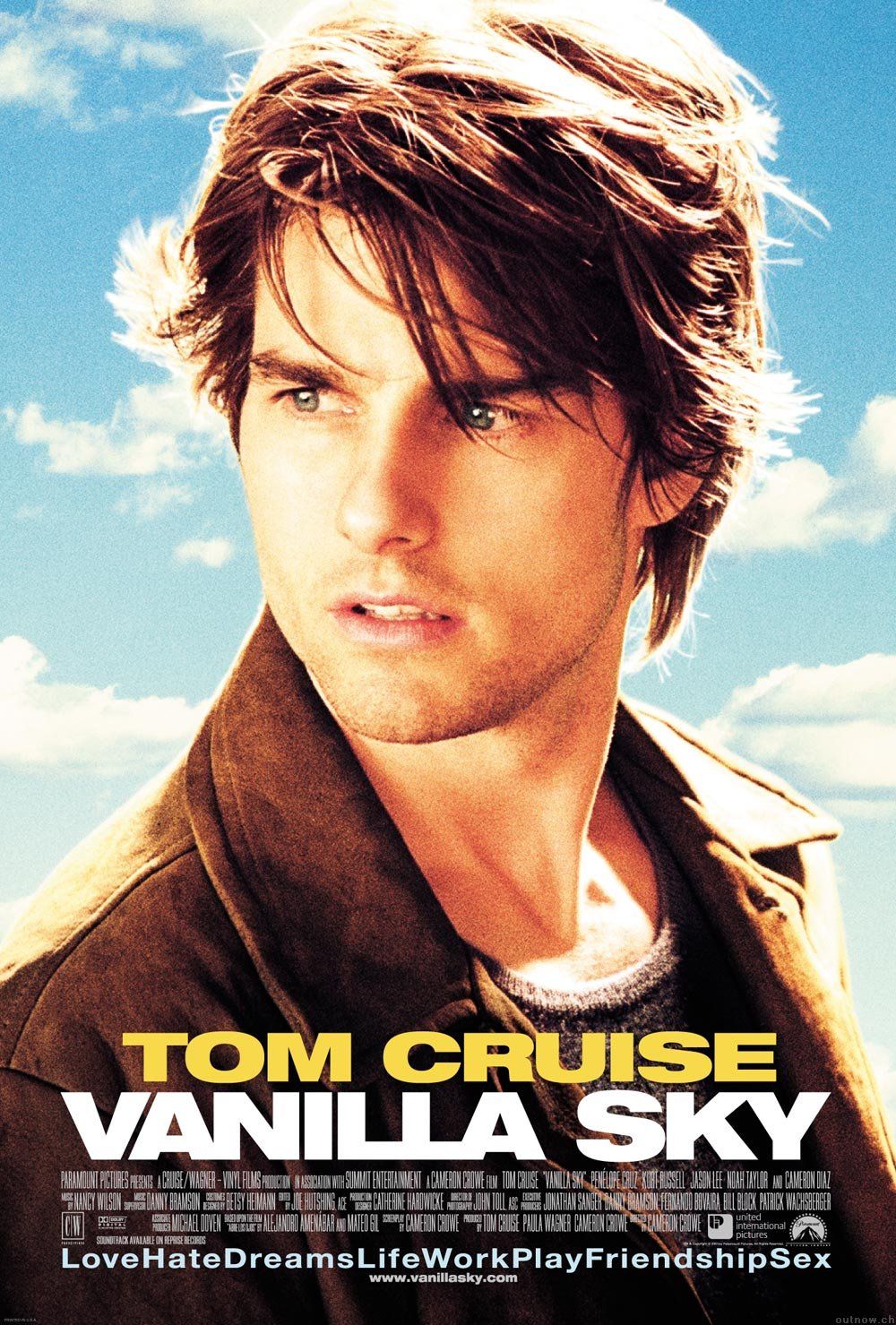 Where to start. Let’s start at the beginning–or is it the ending? Am I dreaming or am I awake? Am I maimed or am I still a matinee idol? I wish I knew. I wish Vanilla Sky knew. I’m not quite sure Cameron Crow knew. And therein lies the problem of directors remaking foreign films that they fall in love with. Crow watched Abre Los Ojos and fell in love with it. He loved the actress and the direction, and the twisted narrative. Here’s the problem: this shit just does not translate. Here’s the other problem: Crow is a great writer and director of character driven dramadies.

He is not an intricate storyteller. His stories are simple tales of men and women, love and loss. He is great at those relationship stories where the characters say everything we wish we could say if we could rewind the tape. Vanilla Sky is more along the lines of American Psycho, Total Recall or some sort of time travel 12 Monkeys kind of thing. You know, am I dreaming, or is this real? What happened when, and to whom? It’s all paranoia and freakishness. Crow doesn’t have the precision to pull of the intricate editing and subtleties that it takes to carry off something this complicated, convoluted and absurd. In the hands of a different director (David Fincher, Jean-Pierre Jeunet/Marc Caro, Terry Gilliam, etc.) this could have been a completely different movie–a better movie. The issue, again, is that nobody else would have remade this movie but Crow.

I can understand that he wanted to try something different, but he really tried something outside of his sweet spot. Despite all this, I’m really on the fence about this movie. This would normally be right up my alley. It has most of the elements of a certain genre I really like–the creepy, time-bending, unreality factor. It keeps you guessing with every scene as to what is going on… and keeps you guessing, and guessing, and guessing, until you realize that you have no idea what the hell is going on. Then it’s no fun guessing anymore, and there’s no mystery or tension, only confusion and a lot of “huhs” and “what thas?”

I started to listen to the DVD commentary track after watching the film the first time. I thought I figured out some of the clues as to what the hell was going on, but was seriously disappointed as Crow glossed over what I thought were really cool touches. Essentially, all the talk afterwards was stuff that we made up in our own heads, and wasn’t intentionally put in the film at all. That’s disappointing. It’s like looking at a great painting and saying, “Wow, that odd stroke in the middle of that colored box just brings the whole thing together, and makes it so cool,” only to have the jelly donut munching artist come up behind you and tell you that the “stroke” you admired was in fact his cat knocking his coffee mug off the counter onto the canvas. I guess found art is better than no art, but… It’s as if he started off with no plan and made the movie interesting only because he kept every scene so vague and open-ended.

I would describe the story to you, but you’ve seen all you need to see in the relentless onslaught that was the promotion machine for this wacky film. Tom Cruise basically plays himself–all smiles and charisma. Cameron Diaz plays a decent psycho, and Jason Lee has absolutely no range but still makes me laugh every time. As for our friend Penelope, she does her best Audrey Hepburn impression, and is certainly less annoying, and more seductive than she’s been in anything I’ve ever seen her in. I still can’t understand anything she says, but at least she looks cute while she mumbles. There is some germ of something here–just the smallest kernel of a good movie just begging to surface. Unfortunately, every time it rears its head, it submerges into the muck once again. Oh well.