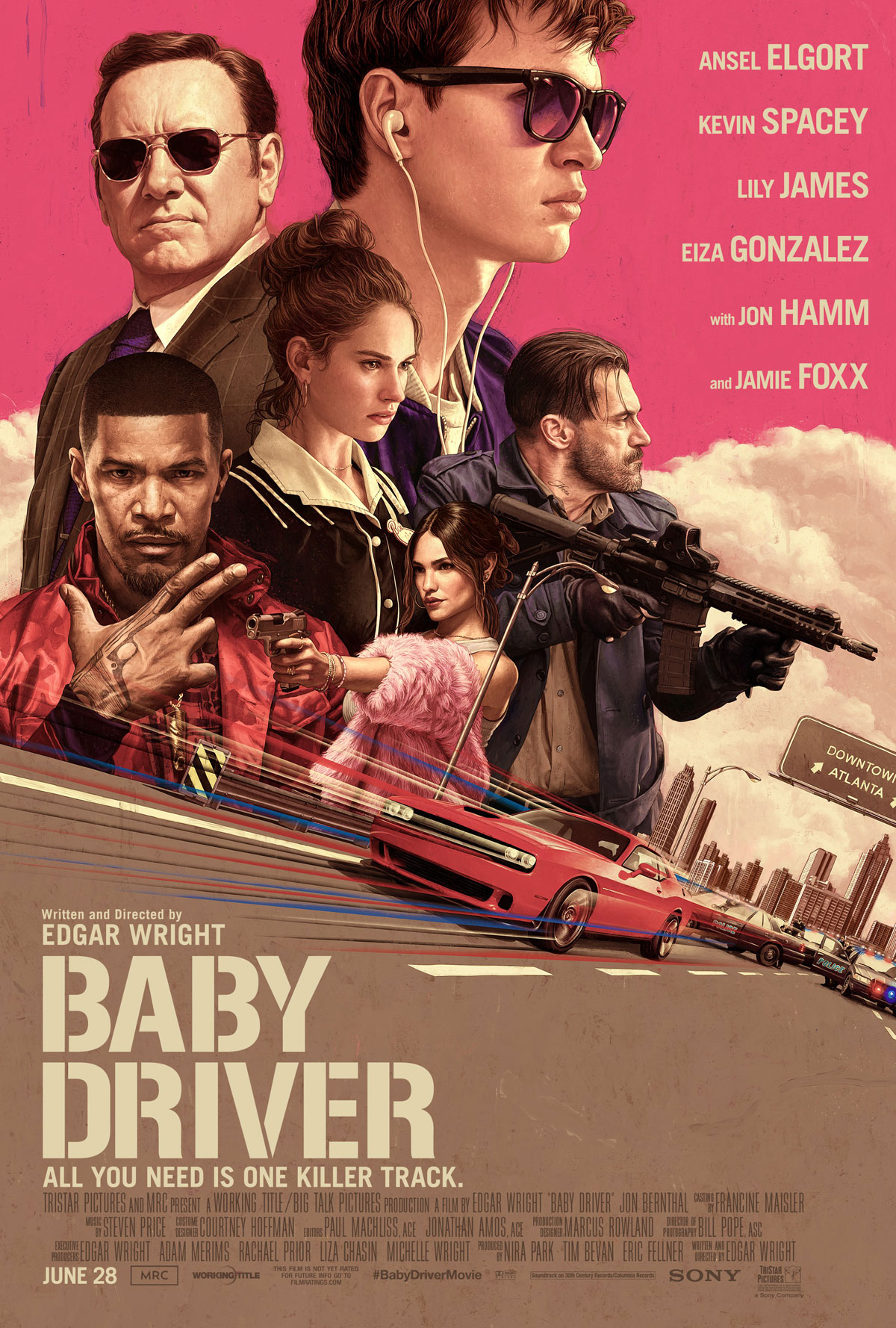 I remember first seeing the trailer for this movie and thinking to myself, “Goddamn if they didn’t make a movie straight out of my brain.” It had everything I like about fun-ass movies. Music, awesome direction, heists, witty dialogue. The works. Thing is, a great trailer doesn’t necessarily a good film make. And in Baby Driver the sum of the parts is just the sum of some fun parts, some eh parts and some parts that verge on dreary retreads. I say this with great sadness, of course, as the potential was there for a rousing good time that either took the lazy way out or just wasn’t as good as I thought it could have been to begin with.

Let’s get the glaringly obvious bad shit out of the way. The Kevin Spacey ick factor takes a chunk out of this thing from the get go. I can’t now hear him deliver a line without feeling dirty. His character (and his equally bad hairpiece, or whatever that thing is) is already kind of not well drawn, but his line delivery also feels as if he is in a stage play while the other characters are in a pop movie filled with chase scenes. That stiffness of Spacey’s has always been a drawback for me personally, but now it’s amplified knowing what he does when he leaves the set. I think his character is supposed to be nuanced; a bad-guy business man with a heart of gold, but Spacey lacks the depth in this case to pull off anything but a rote line reading. Plus, he’s just a super-creepy human being.

Getting beyond Spacey, this is the Edgar Wright show. There are directors who kind of stay out of the way, and then the are the Wrights, Tarantinos and Wes Andersons of the directing world who imbue each and every one of their films with stylistic choices that are all their own. When you go to see an Edgar Wright movie, you know you’re in for smash cuts, crazy close-up zooms and various other hectic camera and film techniques and choices that dot his former films like Shaun of the Dead, Hot Fuzz and, my favorite, Scott Pilgrim. It’s his style and especially his comedic choices and immaculate timing that really intrigued me. I mean, a Wright film starring Jamie Foxx (who has really grown on me over the years) and Jon Hamm has a pretty damn nice ring to it. I had very little sense of who Ansel Elgort was going into this and am not really sure I know who he is coming out.

So I’m already mostly sold on the director and the sense of plot that I have. I’m good with the cast, save one serial-rapey guy and a kid who will presumably be asked to carry the film who I have no association with, but have heard good things about. And then the action starts. First, there’s a kid named “Baby.” I’m still not particularly sure why. Other than they wanted some sort of weird Swingers vibe where everyone just keeps calling him Baby in every scene. Or the kind of hacky way we get introduced to Baby’s eventual paramour, Deborah (Lily James), who happens to be singing a Carla Thomas song from 1966 entitled “B-A-B-Y” during her waitress shift at the diner Baby happens to hang out at. Now, I’ve never heard of Carla Thomas. I’ve never heard this song (though it’s a decent tune). And the fact a brand-new, millennial waitress is singing this particular song on her first shift within earshot of a guy whose name happens to be the same as the title of the song verges on silliness. Granted, maybe it’s supposed to be fate or something, but to me just feels a little bit like lazy writing.

The silliness of the relationship between the enigmatic Baby and his waitress friend aside, we also have the paint-by-numbers crew of dickish criminals that Spacey’s vague criminal overlord puts together. It’s like the script writer just mined a bunch of b-movies for thuggish narcissists and chucked them up on screen. They added some temporary tattoos, threw on some leather jackets, some hair grease and thorny attitudes and voila, you have a gang of criminal assholes that Baby is forced to drive around because of some GTA he perpetrated against Spacey’s character years before. And while Wright isn’t exactly known for putting on stage plays and talky-talky mumblecore nonsense, this one felt particularly more interested in the stylized music and action than it did on either telling a story or developing characters. I think they think they developed the Baby character through some flashbacks and expository dialogue, but since the dude is essentially monosyllabic and only relaying any personal info through interpretive dance and sign language it’s hard to get to the heart of what makes him tick.

Speaking of Baby… What’s up with this kid? One of the characters actually asks that question at some point. Is he slow? Clearly not. Is he yet another modern character who lies somewhere between savant and the autistic Freddie Highmore character on that awful The Good Doctor show that Hipster Parents like? I don’t think that’s the case, but it remains kind of unclear. Perhaps he’s just a damaged kid who was orphaned at a young age, was seemingly adopted by an old, deaf black dude (which somehow is supposed to explain his love of old music?) and then was taken under the Spacey’s criminal-ass wing. If that doesn’t make you into an inarticulate weirdo, I don’t know what would. In any case, he has this internal life that isn’t exactly clear to us, but involves constantly having iPhone ear buds in his ears and listening to a pretty wide range of music. He also records conversations and makes weird mixes out of them. My first issue here is that if he’s so into music and has what seems to be quite a bit of money, wouldn’t he spring for something with better fidelity than the default, white ear buds? That’s a little weird to me. He also keeps all of his music on old iPods. As a guy who kept his iPod way beyond the point that others had moved on to using their phones, this seems like a stretch even to me. The guy still buys all of his music? No streaming services for him? It seems super-inefficient and unlikely. And the mixes he makes are on cassette tapes and not created and stored digitally? Last time I checked iPods don’t have an analog input, so those tapes just go into a case never to be listened to? Clearly they just wanted the throwback coolness of cassettes and needed some way to display the labels in a real-world way. Even CDs would have been more realistic, I would think.  I told you I was going to nit-pick. Anyway, I see the charisma in Elgort, but just wish they could have done more with his character other than having him mostly sit silently behind sunglasses and then sound like a mumbling Elvis Presley when he did actually speak.

This all said, the action, as expected, is pretty spectacular. The car stunts and chases and all that are top notch. They feel real and raw and not overly-glossy or physics-defying like you’d see in a Bruckheimer-produced film. But the way things come together just feels like an excuse to get from action scene to action scene, music piece to music piece, without a whole lot of thought about transitions, build-up or plotting. I’m honestly not sure what I was expecting, but while I was inthralled with certain aspects of the movie, I just feel like it could have been so much more.