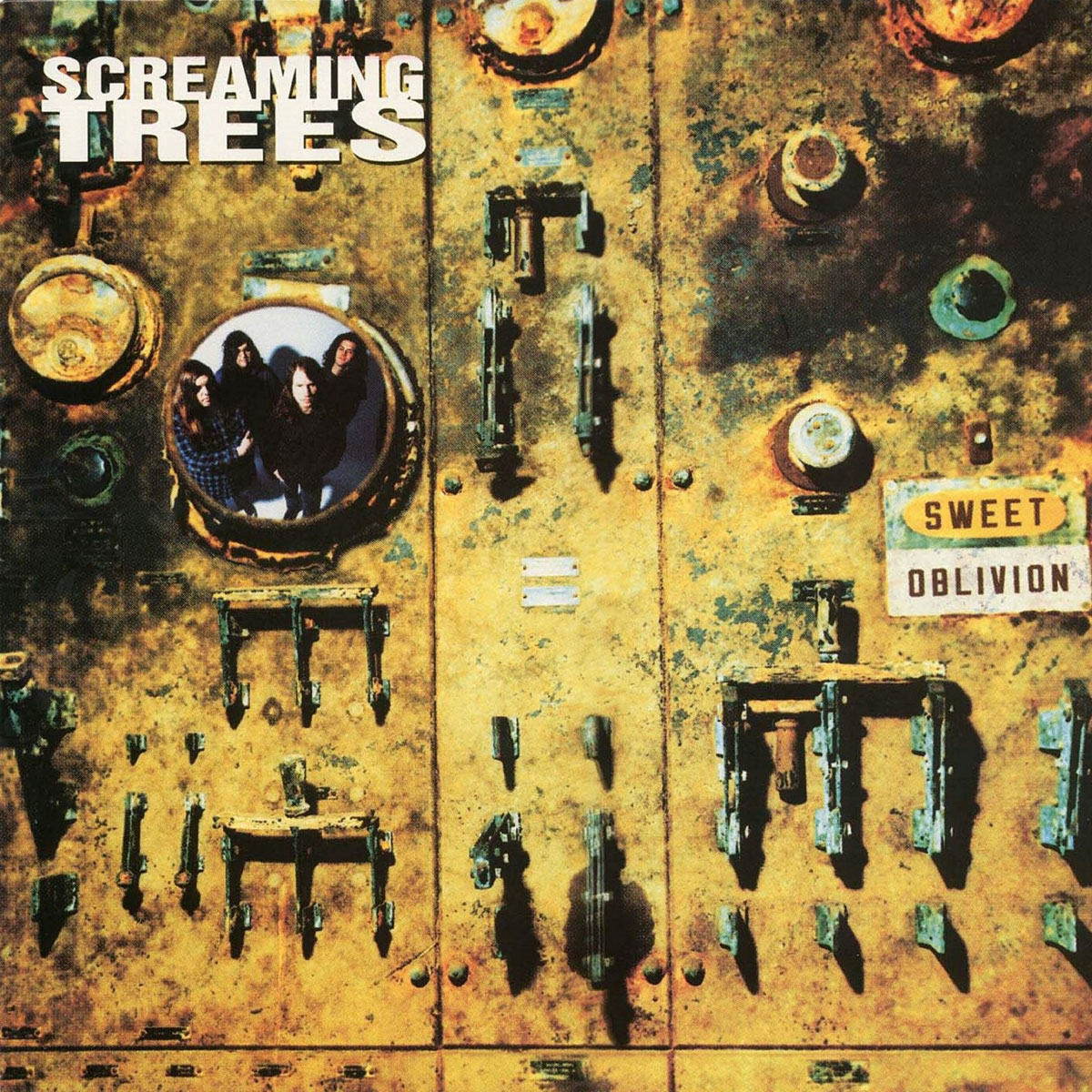 I feel like I read some article way back that called Mark Lanegan the modern-day Jim Morrison. I threw up in my mouth a little bit. Morrison, for all his whatever, was a poseur. And The Doors suck. I think whomever that hack rock journalist was at the time was just making the comparison because Lanegan’s band, Screaming Trees, played vaguely psychedelic type rock ‘n’ roll, Lanegan bares a very, very slight resemblance to Morrison and they both have relatively deep voices. Trust me, The Doors would have never started off their careers signed to labels like SST and Sub Pop.

Of course, by the time Screaming Trees put out Sweet Oblivion in 1992, they were two albums deep with their major label deal with Epic. I don’t recall their debut making a blip on the scene, which predated Nevermind by about nine months. And, as far as I know, this album also hit the market with little-to-no fanfare. Despite landing smack dab in the middle of the grunge explosion. It wasn’t until lead single, “Nearly Lost You,” showed up on the incredibly popular and influential Singles soundtrack a couple months later that this record took off. At least in my world. And, most likely, in everyone else’s.

And, yes, I know this album slotted cleanly into the whole grunge thing, what with them being vaguely from the Seattle area and everything. But they always kind of felt like the weird older brother of bands like Nirvana and Smashing Pumpkins. Despite Lanegan only being about three years older than Cobain and Corigan. Maybe it was Lanegan’s incredibly weathered voice, or Screaming Trees’ more classic rock approach to their rock ‘n’ roll music. In terms of song structure and content. There’s less punk in their grunge. Less feedback and experimentation. Less sludge. In fact, there’s just less grunge in their version of grunge.

This album does lean more into the Soundgarden hard rock side of this era’s music. I wouldn’t call it hard rock, per se. Though I’m not certain how else to categorize it. This swirling, dual guitar attack that definitely has some fuzz and overdrive, but also mostly follows pop music form and function. Like a heavier, way more weathered, bluesy Pearl Jam, I suppose. You can almost feel the booze seeping out of each and every chorus. “Dollar Bill,” with its road weariness and pleading refrain sounds way more lived-in than a 28-year-old dude has the right to pen. Lanegan’s just ragged and worn. Like a roadside preacher admitting his sins and trying so hard to repent to whomever is willing to listen.

This album felt “professional” back in the day. Meaning that it felt like a record written and recorded by professional adults making professional music. The other stuff felt like angry music being made by angry young men. Which I guess was part of the appeal of grunge in the first place. But these guys — despite the turmoil going on behind the scenes — sounded like pros. I can’t say they acted particularly professional, as I saw them play block party on April 24, 1993 at my university when they were on tour for Sweet Oblivion. No, they were visibly fighting with each other on stage. They sounded awesome, even when the Conner brothers almost came to blows between songs. Weirdly, they were opening for the Ramones. Or, not opening, but playing on the block party bill with them. A band made up of fake brothers who also bickered, I guess.

Whatever you thought or think of this era of music, this album — and Screaming Trees in general — seem to have been overlooked. Not at the time per se, but in the historical telling of the time. And, no, I’m not sure Screaming Trees belongs in the same category as Mudhoney, but if we’re going to talk classic albums of the era, why not throw this one in there? Now, with the untimely death of Mark Lanegan, perhaps it’s also time to dig back into his band’s oeuvre, as well as his three-decade ongoing solo works. Start with the booze-soaked 1990 album, The Winding Sheet (which even includes a duet with Cobain) and move on to his even better sophomore effort, Whiskey for the Holy Ghost. And marvel at the fact this dude was consistently putting out albums until his death in 2022. Outliving and well out-recording most of his peers.