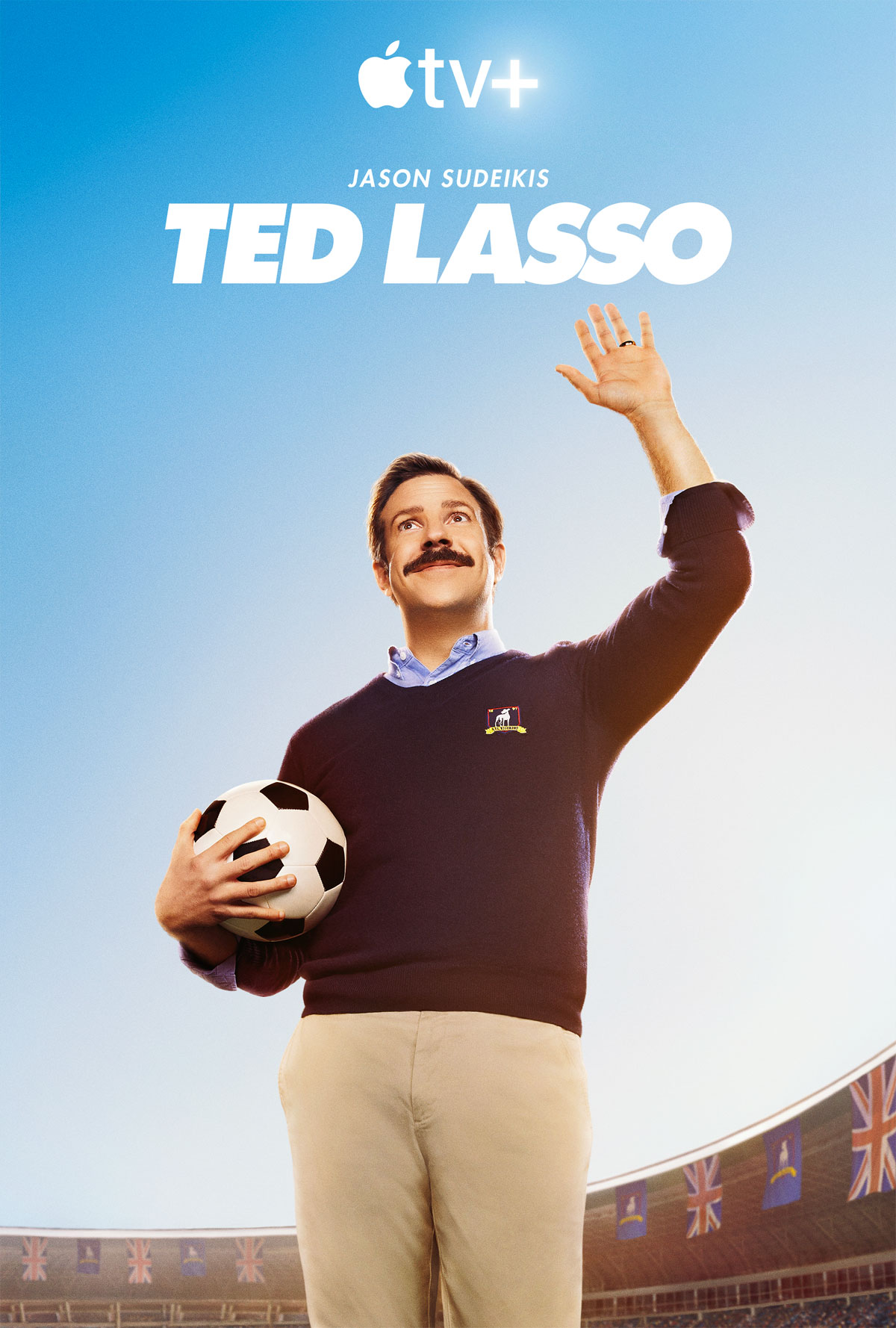 It’s no secret that 2020 was a garbage year. There were so many sucky things, I don’t even have room here to list them. Or the patience, really, to do so. And, honestly, when I first heard about Ted Lasso on the really anemic Apple TV+ network, I wanted to take a hard pass. It seemed too positive. Too goofy. Too much a show out of time. A time when silly was okay, as compared with our current era when everything is a flaming bag a shit inside of a dumpster fire. That Jason Sudeikis mustache alone was enough of a reason for me to be suspicious that this was an unserious endeavor that had no place in our society of cultural wokeness. A redneck football coach making good? No thanks.

But, you know what? This tale of a white guy going over the pond to teach other white guys how to play a white-guy game was at least not condescending to a whole group of minorities or socio-economic youths like Dangerous Minds, Wildcats. Or The Blind Side, I guess. Instead, we have what feels almost like a remake of Major League. I mean the whole setup is a bit different, but the core idea of purposely tanking a team by making intentionally bad decisions is central. And that first decision is hiring Ted Lasso, a man with no experience coaching soccer to coach soccer. Like literally a man with no idea about any of the rules, any of the history, or even any of the culture of the sport of the country in which it’s played. You’d think the dude would have at least Googled that shit on the plane ride over.

In fact, the entire plot of this show is downright silly. Though it’s certainly a way to tell a perfect fish-out-of-water story. This rah-rah American college football coach with all of his quintessential rah-rah America sentiment is sent into the den of nihilistic English football fandom where hope is a four-letter word. Where losing is a way of life. An alter on which fans flog themselves and love their teams while hating everything about them. The only thing that even rivals this in America, I would think, is maybe being a Knicks fan? Though that’s a hell I don’t know much about.

Anyhow, watching an endlessly positive man in Ted Lasso battle the dour, long-suffering fans of a team, AFC Richmond, is pretty damned funny. They’re immediately skeptical that this wacky college football coach can come in and turn around their football club. Thing is, the new owner, Rebecca Welton (Hannah Waddingham), has no intention of her experiment succeeding. Reason being, she’s just inherited the team as part of a divorce settlement from her philandering husband. Realistic? Not at all. But this is the setup (which is, once again, very similar to Major League). But instead of trying to tank to get the team from Cleveland to Miami, Rebecca wants to tank the team out of spite. She knows the only thing her husband loves more than his young mistresses is his beloved football club. And them failing is him failing.

Of course, Ted knows nothing of this plan and, like everything else in life, he puts in the earnest effort to make it work. Despite not knowing what offsides is. The team is made up of the preening young star, the grizzled, but intelligent veteran, the new, new star… Which should all feel pretty damned familiar. But it’s really all about Ted. Or, more so, Jason Sudeikis. He plays it goofy. And that’s where I thought it would stop. But there are layers to this sunny character. The reason for him uprooting his life in Kansas City after coaching his team to a Division II title turns out to be way more heartbreaking than we would have thought. And his insanely positive attitude is somehow not as saccharine as it could be. There’s a subtlety to the writing and the performance that make it infectious. That is really, really good.

And, yes, 2020 was a shit year. And, yes, Ted Lasso could have been a colossal swing and a miss by ignoring the environment and just sticking out like a fart in a silent room. But instead, they crafted a show that is incredibly watchable, weirdly positive and well made. Granted, the actual soccer action is complete trash. No, seriously, it’s some of the worst sports footage since Teen Wolf.  But, ultimately it’s not a show about sports. Well, it is a show about sports… But one that is remarkably universal and sets itself up for a season two that I’m very excited to watch. I hate being this positive about something so positive, but that’s just me and my new 2021 brain.