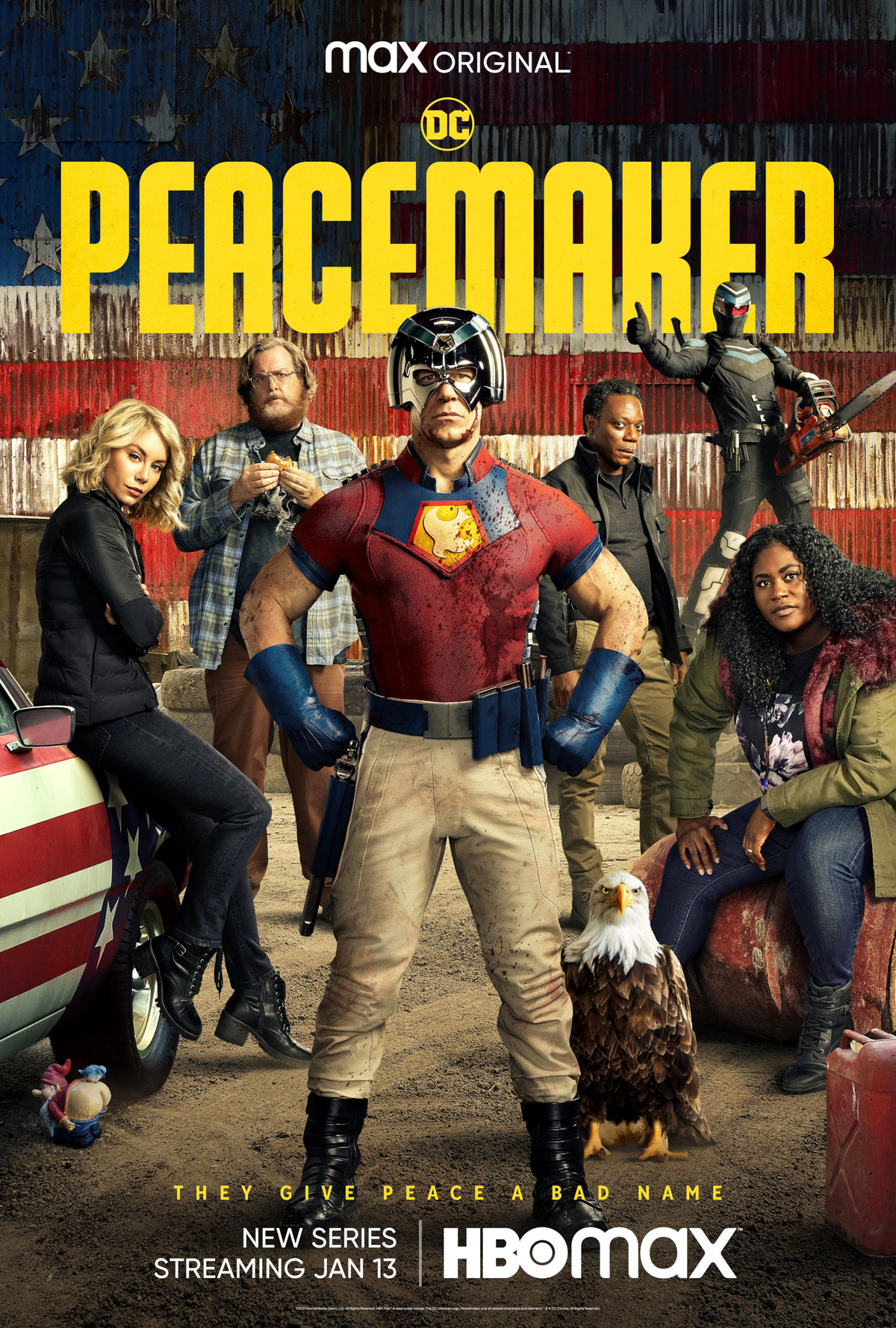 Warning: do not watch Peacemaker with your child. Yes, I know it’s a DC-based superhero thing, but there is some serious sex pretty early on in the series. Not to mention an exploding person or eight and about 420 “fucks” per hour. I’d say it’s a hard R as far as comic book TV shows go. It’s not quite The Boys, but it’s right on its tail. Now that we’ve gotten the kids out of the room, let’s talk about the show. Peacemaker is this ludicrous bro-ey superhero who we first saw in The Suicide Squad. Despite the name, it’s pretty clear he’s not interested in peace in the standard sense. He’s kind of a for-hire mercenary who will pretty much murder anyone he’s asked to murder in the name of… well, in the name of a paycheck, I guess. Though, as we see in this series, murder clearly doesn’t pay so well these days.

After somehow recovering from his injuries in The Suicide Squad, Peacemaker (John Cena) is pretty much forced to work for this shadowy, black-bag psuedo-government agency on something called Project Butterfly. Thing is, Peacemaker is kind of a douchy asshole. They do change his personality a little from the movie to kind of pull him back from being a pure bad guy, but his ideas about things are… well, they’re right-wing and absolute. We quickly learn that whatever he’s been up to isn’t exactly making him wealthy. So perhaps his constant murdering is not for a paycheck, but for some greater desire for his twisted idea of peace. Sure. Whatever the case, he returns to his mobile home, plays some weird 70s hard rock, is generally an anachronistic sexist waste of white trash, and is definitely not someone you’d like to hang with. We wonder why he might be this way, until we meet his incredibly mean white supremicist father, Auggie Smith (Robert Patrick). Oooh, now we feel a little bad for him. Anyone would be fucked up being raised by this racist shitbag.

The series is one of these comedy-action hybrids. With tons of cussing, sex jokes and general mayhem. Cena is actually a very charismatic, funny actor. The show lets him constantly get the shit beaten out of him. In fact, it’s pretty clear the writers themselves don’t really think the guy is worth a damn, but they manage to give him a decent arc regardless. But, hey, they’re gonna make him earn it. After all, he’s a superhero without any discernible power other than a naturally muscular build (we never see him hit the gym) and some fancy helmets that his weirdo dad creates in his quantum closet. Or whatever it is. He’s also not super-bright. Not super-fast. In other words, he’s just a dude who is apparently good with guns and brainless enough to charge headfirst into situational danger. So we get to watch him get thumped over and over again. It’s pretty entertaining.

So this little governmental group charged with Project Butterfly is made up of Peacemaker, his demented friend, Vigilante (Freddie Stroma), and some other non-costumed people. It’s a little unclear if the whole Vigilante / Peacemaker friendship is a one-way street, with the fawning, much younger Vigilante kind of an idiotic psychopath in what looks like a G.I. Joe Cobra Ninja outfit. I think he’s in the series just to make Peacemaker look sane and balanced. But, hey, the dude is funny. As is the rookie plant, Adebayo (Danielle Brooks), who is kind of the audience avatar. She has a bit of a secret agenda, but she is also the noob outsider looking at this small gang of oddballs wondering what the hell she’s gotten herself into. What with these people seemingly looking to assassinate whole families, including children, in their pursuit of Project Butterfly. Whatever the hell that is.

Essentially the show feels like a mash-up of Men in Black and Deadpool. Ooh, that’s who Vigilante is. He’s the DC version of Deadpool (including his very similar costume and off-the-wall personality). Kind of. And, I suppose in a way this is a workplace comedy. If you squint real hard. Considering this band of misfits are all employed by the same entity trying to accomplish the same end. Personalities get in the way. There’s a real Jim / Dwight dynamic between Peacemaker and his nerdy, non-superhero co-worker, John Economos (Steve Agee). But like way meaner. Because, remember, Peacemaker is a psychologically damaged dick. But the group eventually works through their differences and comes together to try to vanquish the evil at the center of Project Butterfly. I won’t go into what that is so as to not spoil anything, but it will feel familiar…

Ultimately the show is a lot of fun in parts. Hell, they use some really good CGI to make Eagly the eagle, Peacemaker’s pet and best friend, hug him. The shit is funny. They interweave plot and action well and the characters are actually pretty well developed for a superhero show. The actors are also well cast and seem to embody the characters scene after scene. The graphic violence and over-the-top language definitely limits its audience somewhat, but the technicolor craziness and occasional shocks keep things clicking along. It’s an interesting parallel looking at John Cena versus The Rock and where their careers have gone and could go. Cena seemingly has taken on roles like this one that feel a bit too dark for Johnson’s shinier, more PG persona. In some ways — actually in most ways — Cena’s ability and willingness to take on flawed and seriously damaged characters is more interesting. This Christopher Smith / Peacemaker dude, with all the muscles and bravado, who could seemingly kick everyone’s ass, who also suffers from crushing insecurity and doubt and some deep-seated daddy issues. It’s hard to imagine The Rock ever doing something like that. He’s all bravado and confidence with the winks and the eyebrow. Anyhow, just some meta stuff to think about when you’re watching this fun-ass show. Not with your children.