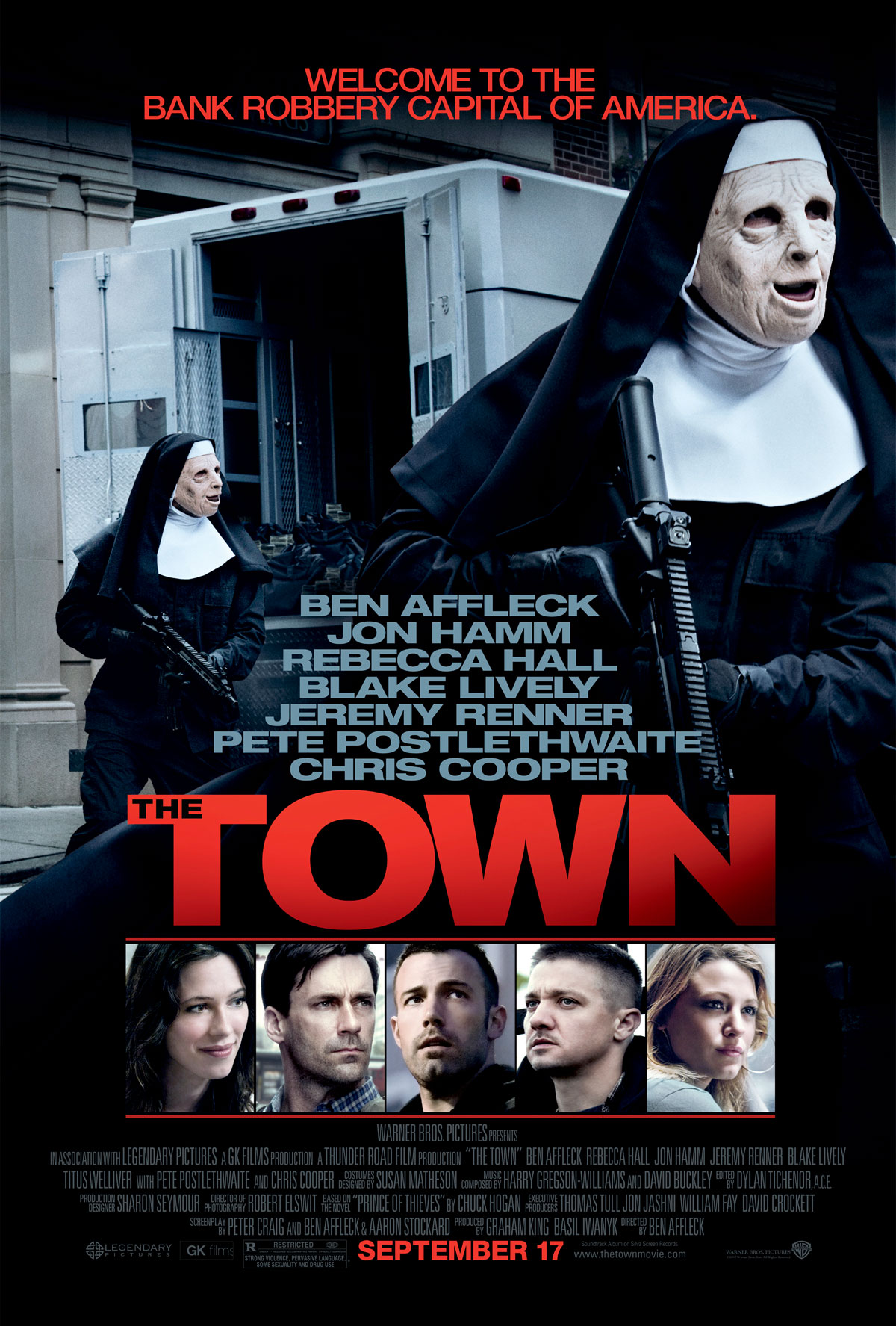 There’s this certain genre of blue collar caper movie that’s out there that makes perfect sense in the pantheon of both tough guy character and caper movies as a whole. Sure you have your Ocean’s Eleven with its slick characters, wise cracks and advanced technology but you also have your films about those hardscrabble Hell’s Kitchen crews with their leather jackets and greasy hair. Lucky for us in this film you get two two two movies in one! Of course this is a Ben Affleck movie, son Boston is the backdrop of this gray “townie” world in which we’re dropped.

And then we’re introduced to the crew. And this is where the movie begins to unravel. The characters are so stereotypical and so standard that it feels almost immediately that we’ve seen this movie before. You have the crazy two-time loser whose morals are loose and isn’t afraid to be called a psycho. And you have his best friend from childhood, the guy who had a future (usually as a professional athlete, which is the case here), but through injury and circumstance with the ‘hood he can’t seem to escape, has fallen in with his hooligan buddies. He’s the brains of the operation, which in this case is robbing banks, and though he’s reluctant to make this his life’s ambition, this is the life he’s chosen. And he’s fiercely loyal to his psycho friend, despite his psychoses and unpredictability when it comes to his violent tendencies. And, inevitably, this main character decides it’s time to “go straight” because of a woman, but something compels him to do “one last job.” And that thing compelling him is a combination of some super evil guy (in this case Postlethwaite) who holds something over him and his loyalty to his crazy friend who needs this score. See any number of movies here with the same exact plot.

So putting the plot aside, because you all know how this ends if you’ve seen Carlito’s Way, Heist or any number of other films like this, what you have to think about is the way they execute the heists, the car chases, the shoot outs and the character development. And I gotta give it up to Affleck for really trying to put some heft behind his characters, to try to make them three-dimensional and build their backstories. Plus he has an ace in the hole–Jeremy Renner. Wow can that guy act the shit out of that psycho role. As the Irish-American downtrodden Bostonite, with his bad skin and frankly non-actor looks he is amazingly believable as a scary-ass dude always on the edge of violence. He acts with his eyes, which just project anger, and is also very physical. He feels like that dude we all know to steer clear of. Affleck isn’t terrible, but it’s hard to not remember you’re watching Ben Affleck. I guess in that sense he’s pretty good, as it almost feels like this is who is–this blue collar Boston guy who wants to do good, but is damaged by a lifetime and a legacy of his surroundings. So in terms of the actual heists, he doesn’t try to be overly complicated. There are no crosses and double-crosses that involve empty suitcases filled with paper and all that nonsense that’s so transparent in most heist movies. Most of their capers are of the smash and grab variety. They pull up in a minivan with masks on while the armored car guys are unloading and pop out with machine guns and take the money. At least they didn’t do the typical thing and make working class guys these super geniuses with their elaborate schemes. They can handle a gun, intimidate and drive fast. In fact most of their robberies don’t seem to go perfectly and more than once they end up in chases and shoot outs with the cops. Their last plot (robbing Fenway Park!) is that “last job” and is a bit more elaborate, but is clearly plotted by the main evil dude of whom I spoke earlier. That ends Alamo style as you can imagine, as all of the members of the crew have their moments of glory against the Boston PD and FBI (who have been tracking the crew).

So while there is very little that’s original or different about this film–as Affleck clearly borrowed from many movies over the ages, including Point Break –there are moments that make it worth seeing if for nothing other than have Renner scare the crap out of you.