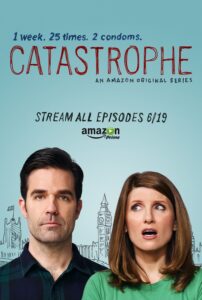 How are we supposed to know shows like Catastrophe exist? I never saw a single ad for it. I don’t even recall seeing a promo for it on Amazon, and I’m on that site at least once or twice a day looking for like socks or marital aids. I mean does Amazon care about the success of these shows they must spend money on in some manner? Or does Bezos just have his eye on the drone thing and is leaving the success of things like their original programming up to chance? So this is where things like podcasts come in, I suppose. Where else am I going to hear about this oddball comedy that is somehow tied to one of the British broadcasting units besides a free medium where they throw it out almost as a side mention and a decent, short review? And it’s only because of these podcasts like Hollywood Prospectus that I take up watching shows like this with actors I’ve never heard of and a plot that honestly sounds kind of lame at first blush.

And that plot is as simple as a giant, goofy American dude goes over to London to scout the prospect of opening a London branch of his Boston-based ad agency. While there for a week he has a torrid affair with an Irish school teacher. They have lots of sex for a week and, surprise, she comes up with a case of the fetuses. That’s the whole set up. And this tall goofy guy (whose mother is played by a crotchety PrIncess Leah) wants to do the right thing and step up. He moves to London under the auspices of actually opening that London office, yet seems to spend the entire time making breakfast for this woman. And having sex and meeting up with some fun supporting characters, including his girlfriend’s family and [very few] friends and even a degenerate ex-pat friend of his who loves nothing more than a nice hooker prostate massage.

The fact this newly minted couple is surrounded by unhappy people somehow puts context around their less-than-ideal situation. The couple traffics in witty banter that regularly allows them to call each other “asshole” and sarcastically threaten to smother each other, but it is somehow not the dark nastiness in which other shows deal. The couple is just using humor to get to know each other, and sarcasm, on a realistic level, helps them ease into intimacy. Sure, you can hear the words on the page sometimes, but it also feels like how a couple of comedians might get to know one another.

The wittiness of the script aside, there is some Seinfeldian acting on the part of Rob Delaney at times, most obviously when he’s angry and blurting c-bombs at his betrothed that seem to come out of nowhere. It’s almost as if he, the actor, is uncomfortable with the confrontation and can’t fully commit to the anger so he kind of says it with a wince. Or like a young boy trying out cussing for the first time. And maybe that’s intentional, but I think it might be a limitation to his acting prowess more than anything else. Though, like the actor, Rob the character is usually immediately apologetic and recants his impulse control spazziness with genuine feeling.

But even better than the two main characters are the aforementioned twisted, but surprising supporting cast. Because, just like Seinfeld, Rob is somehow the most normal of all his cohorts. My favorite is the slightly menacing husband of Sharon’s best friend. He’s like Begbie, but with a heart. The actor, Mark Bonnar, is just so perfect in his deadpan Scottish approach to everything, and while he comes off on the surface like one of the better badass characters I’ve seen in a while, he turns out to be the sweetest person of all.

The series is a mix of funny — but not like laugh-out-loud funny — and smart writing about human relationships. I’m honestly not sure how they expand it into a second season given the cliffhanger season-one ending without it turning into a melodrama or a rehash of Up All Night. Neither of which sound very appealing. But I’m sure this talented writer / acting duo can pull it out and I look forward to their epic London adventures in season two. Who knows, maybe they’ll move it to Boston and we’ll get this wacky Irish woman surrounded by some wicked Irish-American brahs!