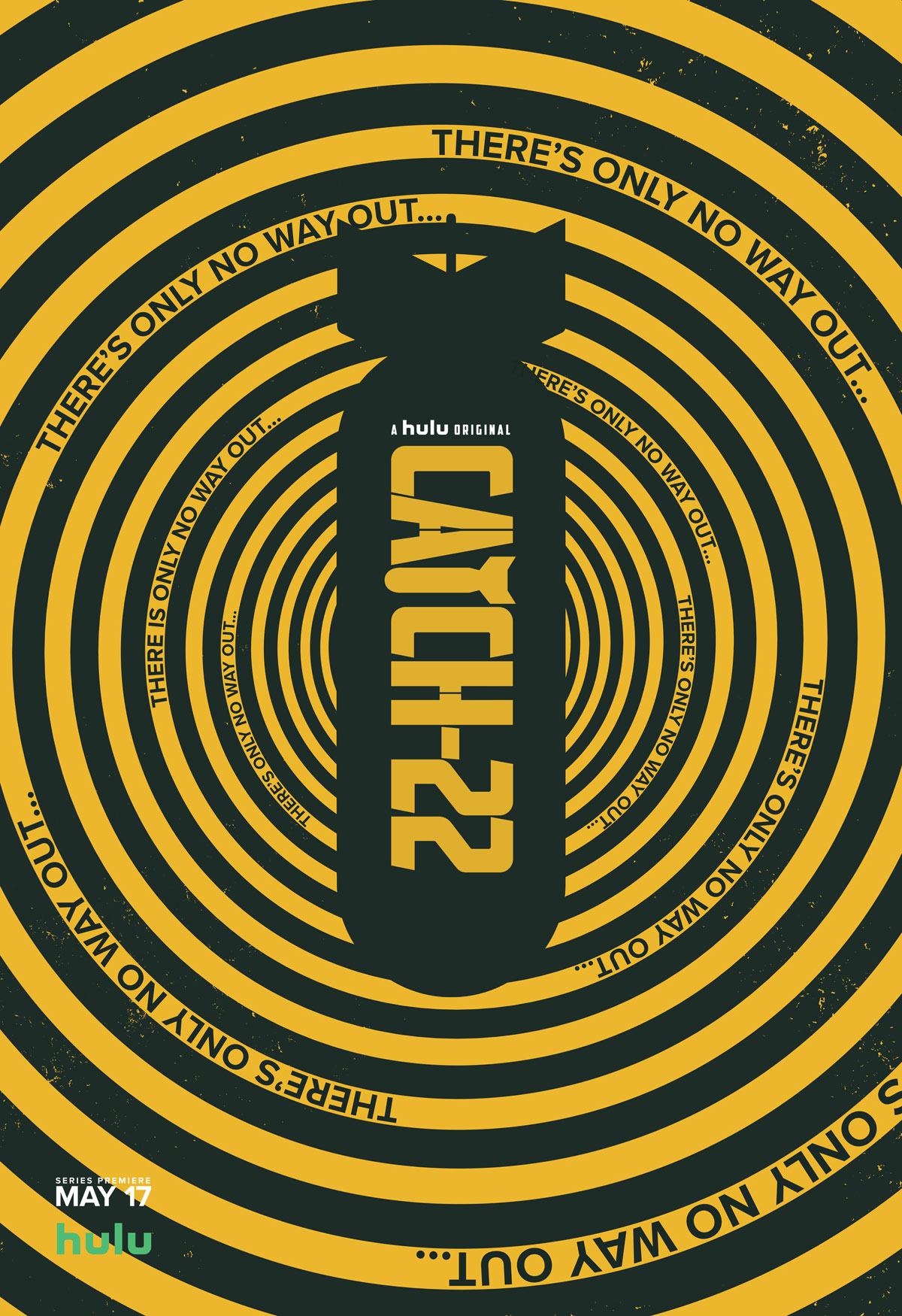 I don’t recall exactly when I actually ready Catch-22, but I seem to recall it was in my early days in NYC. I borrowed an old copy from my folks when I moved from LA and read the novel while hanging from a strap every morning on my way to work. I was in my early twenties and idealistic and probably a little bit rebellious. Of the mind that that everyone in any position of power had it over me, and that I could subversively — or sometimes through outright disobedience – beat the man. Turns out, some twenty-five years later, I was wrong. Which I should have known, after reading that awesome novel about how the rules are essentially stacked against the little guy. That even when you do everything you’re supposed to, put in your time, the man will just screw you over and over again.

This series, based on Joseph Heller’s sly, humorous and emotional novel set during WWII, misses a lot of that. First, it unravels the complex time juggling act that the novel pulls off structure-wise. The show chooses instead to tell a pretty linear story of John “Yo-Yo” Yossarian (Christopher Abbott), a bombardier stationed on an island off of Italy. He and his fellow bomber squadron fly mission after mission, bombing the hell out of what looks like little Italian villages, cities and towns. All the while, he sits in a glass nose cone while flak explodes around him. Sometimes bringing down comrades. Sometimes not. As he approaches the mission that will finally give him enough to send him home, his nerves are frayed. And just as he’s about to hit his number, they raise the mission limit. This continues to happen over and over again, despite his best efforts to get himself sent home.

There are lots and lots of scenes of the men in the bombers. And, honestly, they look really good. Better, certainly than some of the CGI stuff in Greyhound. But in the series’ six episodes, we probably see them do the exact same thing about 20 times. It was cool three or four times, but after eight it became indulgent and repetitive. And maybe that was the show’s writer’s intentions – to wear us down — but instead it made me check out. We also see the boys swimming a lot in the beautiful Mediterranean. And, again, maybe this was George Clooney’s way of spending time near his gorgeous home in Italy or something, but I didn’t need another one of these scenes of the dudes in their oldie time swim shorts. Nor did I need another scene of our characters visiting the whorehouse on the mainland. And, yes, maybe it’s in the novel, but they chose to leave out a lot of stuff from the novel, so why include so much of this?

Like I said, instead of bitingly funny and whip smart, this series comes off as a bit goofy at times and gets bogged down in the minutia of trying to explain The Syndicate and ends up making it more confusing than interesting. The Syndicate being a business endeavor that the mess officer starts that entails all sorts of wackiness with trading goods and services with both allies and enemies and basically generating this international trade Ponzi scheme of sorts that seems to ultimately have more power and influence than any of the US military envoys or generals who are supposedly running the war. It’s this whole thing that eventually spiders its way through everything, shows up in every scene and leads to a climax that seemingly uses The Syndicate as an overly wrought plot device to get this one thing into place. I think it’s a commentary on capitalism and industry being the true seat of power, but it’s just explained poorly in the series, and in the sixth episode is made a complete mess. I even rewound a couple times to figure out what the heck was going on, but it didn’t help.

Ultimately Christopher Abbott is actually a pretty compelling actor. He definitely sticks out amongst his more corn-fed, super-white-guy compatriots, with his foreign-sounding name (he’s Assyrian in the novel) and olive skin. He’s pretty much in every scene and does a lot of face acting, physical acting and acting frightened. All of which he excels at. Thing is, most of his fellow characters are there to be clowns. To play for laughs. Or play for darkness. Neither of which are particularly present. And, honestly, the more I watch Clooney, the more I’m convinced he’s not a particularly great actor. He’s doing his bug-eyed Coen Brothers schtick in this series, and it’s tired. Hugh Laurie is always terrific, but he’s underutilized. Same goes for Kyle Chandler. The rest of the cast kind of blends together. White dudes in their twenties, who are not funny, nor interesting, nor much of anything. The whole thing looks decent, at least. The performances are fine. And Abbott distinguishes himself. But the series itself feels like it’s on a loop. And the narrative — despite the show’s creators trying to make it cleaner by making it linear — is super muddy and not particularly dynamic. The ending is changed considerably to maybe add a little bit of an ironic twist (rather than the hopeful one the novel suggests), but even that kind of falls flat.