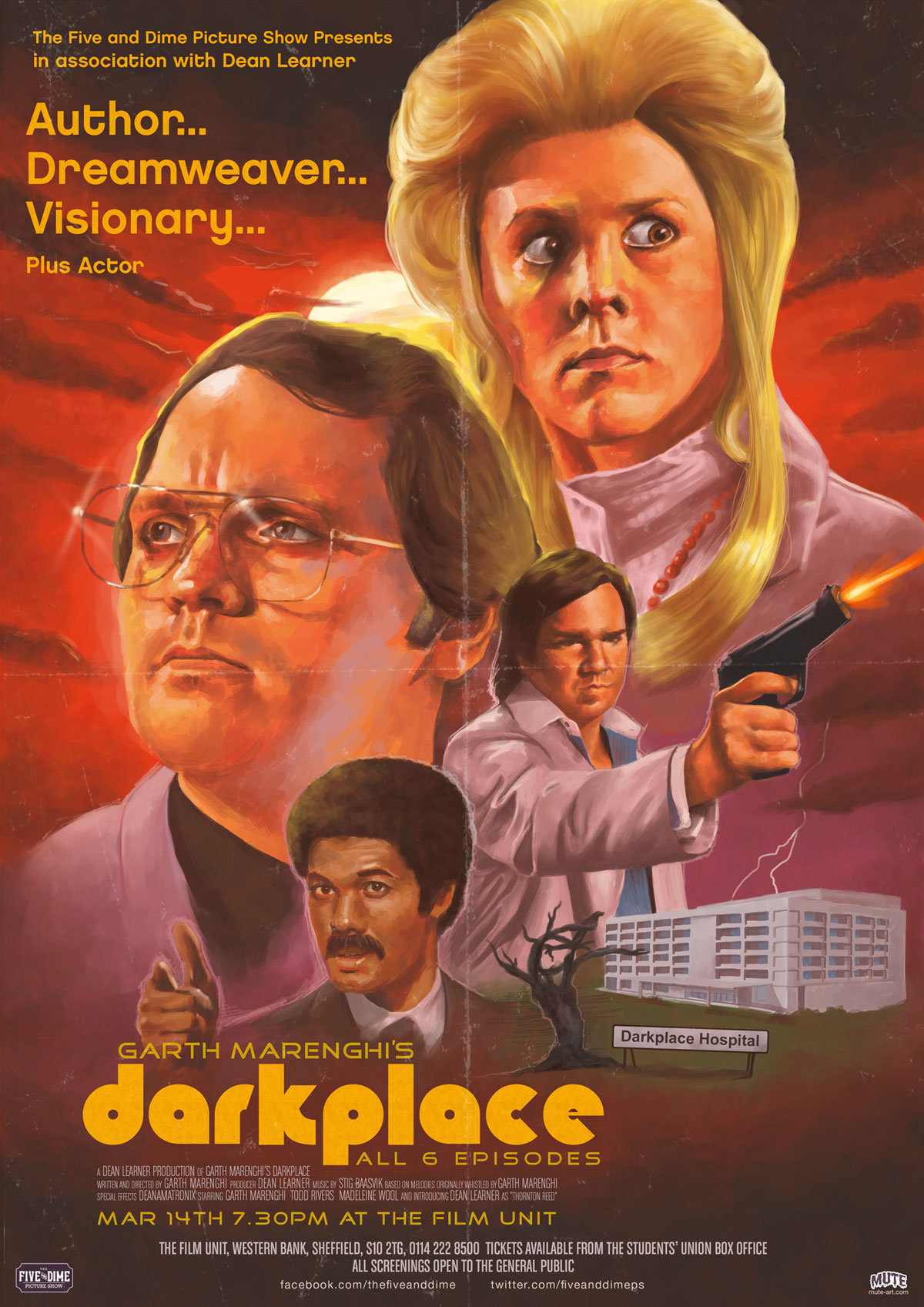 I’m trying to recall how the hell I found myself in Garth Merenghi’s Darkplace. As best I can reconstruct it, things started after I recently watched a Taika Waititi movie. From there I thought about another one of his movies, which turned into the awesome horror/comedy series, What We Do in the Shadows. Which stars Matt Berry. The same Matt Berry who stars in this absolutely bizarre horror, comedy meta series about a megalomaniac British horror author, Garth Marenghi. Who absolutely does not exist. Who made a weirdo horror series for Channel 4 in the 1980s, which also absolutely does not exist. The show within the show is just about the worst thing ever made. Which is the point.

Now, if you’re confused, don’t worry. Let’s try this. Matthew Holness is a British comedian. He’s created this character Marenghi — because British comedians love creating characters like this — who is basically a bloviating idiot. He claims to be a best-selling author of horror novels, in the vein of a Stephen King. We don’t really get a sense of how successful or popular he actually is, but the few passages he reads from his novels makes me think that his success is mostly in his mind. Whatever the case, he’s popular enough that a British broadcasting network gives him some cash in the 80s to write, direct and star in his own horror series. His publisher, Dean Lerner (Richard Ayoade) produces and also acts in the show. As Marenghi tells it, the network just couldn’t handle the advanced nature of the material and shelved it before ever airing it in favor of something typical. Now this series that we’re watching is Marenghi (in 2004) finally getting the chance to get the series out of mothballs to show for the very first time to a network audience. This series includes that unaired show, along with some interviews with the cast (in character) mainly saying how awesome it is. Though we can clearly see it is not.

The 80s show has a pretty basic plot. There’s a hospital that was built over a pit to hell. Or something. The characters are all staff at the hospital, including Holness playing author/actor/director Garth Marenghi playing Dr. Rick “Dag” Dagless, M.D. And Matt Berry playing actor Todd Rivers playing Dr. Lucien Sanchez. You get the idea. Because the hospital is built over a portal to hell — or whatever — weird shit just continuously happens. Somehow most of it is vaguely misogynistic and/or totally nonsensical. Or both. On purpose, of course. Because Marenghi is just plain awful at everything. But is the most conceited man ever. Which I suppose is what makes things funny.

Otherwise, the laughs are mostly from sight gags. Terrible special effects. Actors looking at the wrong camera and disorienting over-the-shoulder shots. Matt Berry’s dubbing is off almost the entire series. There is absolutely no regard for continuity. There’s an entire episode that is clearly meant to just shit on the Scottish. Because Marenghi is a bigot, or whatever it’s called when you’re prejudice against the people of Scotland. The gimmick is the gimmick. And it’s not dissimilar than the dumb movies I used to make with my friends when I was twelve with the space ships with the strings that showed, terrible edits and adorning my dogs with Mickey Mouse ears to make them into giant monsters to attack my Star Wars characters. It’s supposed to be amateurish. And that’s just what it is. The funny thing is, British TV in 2004 was probably only a small step above what we’re seeing anyway.

Look. I’m American. I don’t understand this Mr. Bean-ish English thing where dudes play characters in some sort of never-ending meta loop. To me it feels like one overly-long SNL sketch from the back half of the night. It’s entertaining for about the first two minutes, but degrades over time. If I were a smart person I’d make some half-life comparison here, but suffice it to say that by the end of the episode six, all we’re looking at is an inert lump of lead. Yeah, I never took chemistry. So don’t expect miracles. It’s just that purposely shitty TV isn’t something I’m particularly looking for in 2021. And it seems that this series underwhelmed enough to get itself canceled after one short season. Because, honestly, it’s a one-trick thing: Marenghi is an asshole and everything he does sucks, but he thinks he’s a brilliant visionary. Or maybe that’s the point? Or maybe they knew that eventually stoned college students and horror dorks would get their hands on this thing and love the hell out of it. Not that there’s a tiny bit of me that appreciated the absurdity of it, but I’ve never been a real fan of the absurd. So I’ll stick to my guns and give it a thumbs down. Unless I was a totally different person, in which case I’d give it a thumbs up. See, this show really has me screwed up.