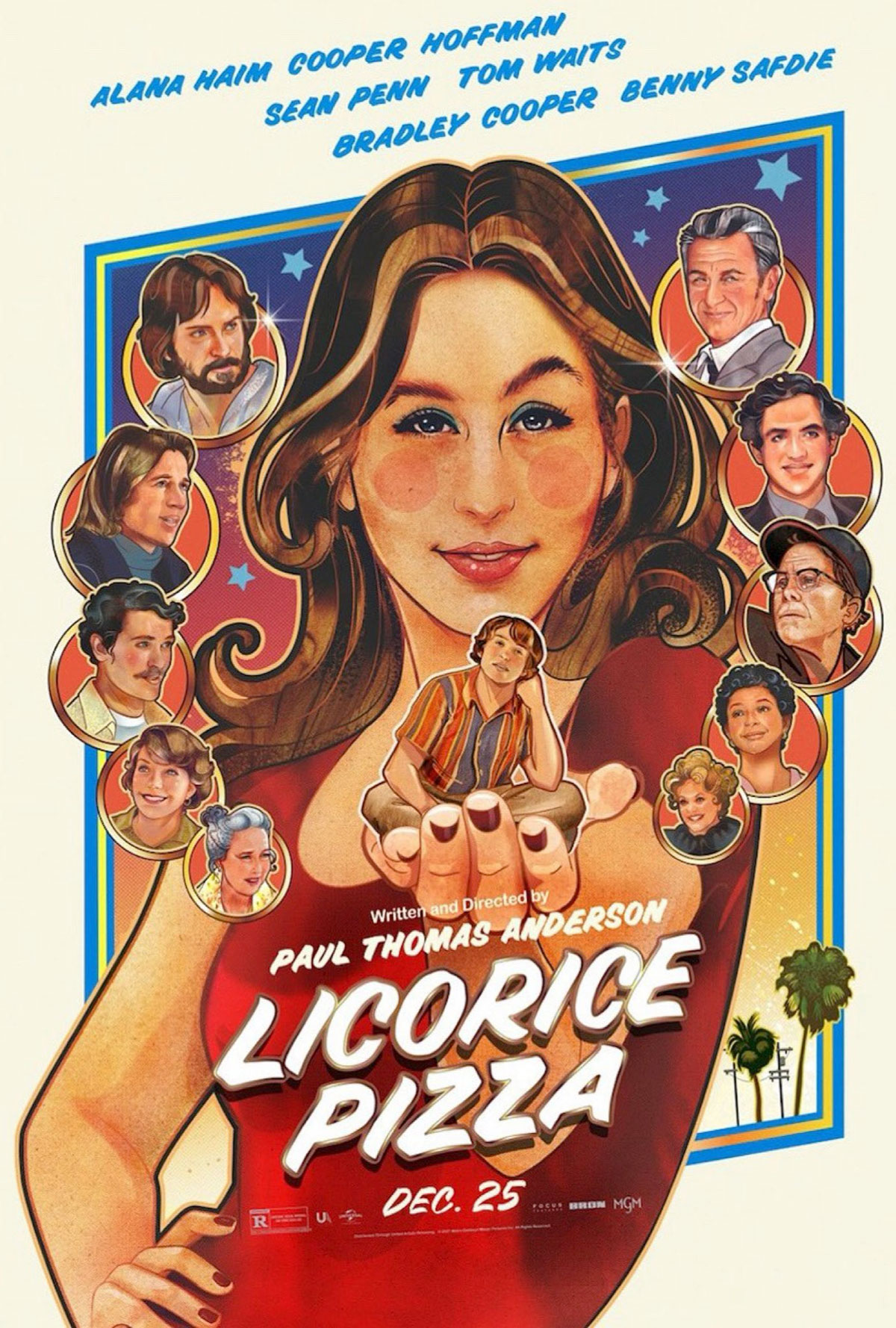 I’m pretty sure my movie brain has been broken by television. It’s not as if I didn’t watch a lot of TV growing up in the San Fernando Valley, the setting of this particular movie, Licorice Pizza. Which continued after I moved to West LA at age eleven and onto the East Coast as a college student and adult. But now, in 2022, I can barely watch a movie without thinking “Is that it?” Even a long-ish movie like Licorice Pizza leaves me a bit cold. I’m barely getting to know these characters when the credits roll. I seem to need at least eight hours to get into stuff since television has morphed into my main viewing experience. Even when I actually own a throwback Licorice Pizza t-shirt that I bought way before this movie was announced. Because that’s the record store in which I shopped for tapes at the Sherman Oaks Galleria as a child. Or at least where I browsed before buying it for cheaper at some other non-mall record store.

So you’d think that, despite the period setting of this film being about a decade before my Valley heyday, I’d be the perfect audience for this entertainment. I mean on top of all that, it’s Paul Thomas Anderson. How could it not be awesome? A man who grew up right near me at almost the exact time as me. His memories must be my memories! But he placed this film a decade earlier than it feels like he should have given his/my age and experience. And those ten years make a biiig difference. This film feels way more 60s than seventies. And is light years away from my 80s Valley experience. Or at least the part I recall more clearly as a cognoscente human being. So why did PTA not write and film his lived experience? He was three when this film takes place. Could he have not written about, say, 1985, when he was the same age as the main male character, Gary (Cooper Hoffman)? A time that might have meant more to him — and, frankly, more to me. C’mon PTA, service my needs!

And then I thought about it. Maybe I’m not the world’s biggest PTA fan. I waited forever to see Inherent Vice, and my 2021 viewing of it was… not positive. I also find There Will Be Blood to be kind of absurd and overrated. His other films, like Magnolia, are mostly decent, but all — with the exception of the tight little gem, Punch Drunk Love — suffer from PTA meandering. Which I suppose some see as a feature, but I see as a bug. The lack of focus and editing and general guardrails on reality makes my OCD mind a little crazy. In this film, he does his usual thing where there is a loose framework of a plot, but he keeps it super-flex and just kind of follows the action from scene to scene where he can throw in cameos by the likes of Sean Penn, Tom Waits and Bradley Cooper to ham it up as stand-ins for famous 70s Hollywood people. Even reading up on the film I see that PTA pretty much gathered stories, observed some stuff driving around the Valley and then just kind of strung them together into a movie. Which, fine. But that’s not really a narrative now, is it?

And while I didn’t recognize a lot of the stuff in the film, I was certainly familiar with others. There is a scene that takes place in what purports to be the Venture Blvd location of Tail o’ the Cock. A bar/restaurant that I drove or walked by every single day from 7th to 12th grade, as it sat about one block from my school. And, of course, what teenaged boy — especially at an all-boys school — could resists a giant sign with the word “COCK!” on it? And, as I mentioned, there are some real people in the film. Some as stand-ins for real people barely disguised using a different name. And then there are three or four who are just straight-up named. Inclusive of Mary Grady, agent of child stars. And how do I know about Ms. Grady? Well, there’s this:

Yes, I was represented by one Mary Grady and her lovely MGA a team. Granted, this was about a dozen years after the timeline of Licorice Pizza. So Mary, who died in 2021 at 96, was already 60 or so when she took me on and continually sent my 4’7″ ass to heavy metal video auditions and Hasbro commercials for toys for like seven year olds. My time there was not great or productive. In fact, the first audition I went on I sat next to Corey Feldman, fresh off his turn in both Gremlins and The Goonies. I did not get the role. But she was definitely a character, much as she was portrayed in the movie.

The plot here is super-basic. There is a 15-year-old high-schooler named Gary. And a 25-year-old adult woman named Alana (Alan Haim). Gary befriends Alana at a school thing where, again, she’s working as a grown-ass adult. And he proceeds to try to turn their odd friendship into something more. While showing off his entrepreneurial prowess as a water bed mogul and then a pinball mogul. It’s still completely unclear to me — and completely not explained in the film — where Gary gets his start-up and operating capital to purchase his water bed materials and storefront, but this is apparently not the kind of stuff PTA cares about. One minute he has an idea, and the next moment he’s just up and running. At fifteen, the son of a single mother and clearly without means or any type of income. Okeee. PTA’s thing is vibe. You can tell this from his overly long, rather dull scenes of kids hanging out in Gary’s “Fat Bernie’s” showroom. The pacing is… not to my liking.

What is also not to my liking is the awkward relationship between this boy and this woman. I’m not sure if we’re supposed to be okay with it, but it’s kinda weird. She exhibits jealousy and varying degrees of disgust and shock at his business aptitude. One minute all doe-eyed and the next horrified she hangs out with children. The whole thing is uncomfortable. And I don’t really need to care about a will-they-or-won’t-they between this very dynamic child and this somewhat, uh, normal lost adult soul. It’s just not that interesting to me. What does save the movie, however, is the acting. From the first minute I was like, “Who is this Gary kid! He looks familiar and seems familiar, but he is just great.” I could feel it in my bones, but I just couldn’t quite place it. Until I glanced at his last name and almost screamed, “It’s fucking Philip Seymour Hoffman!” He’s built like his dad, he has the charisma of his dad. But, mostly, he has that special something where you can see the desperation bleed trough the confidence. It’s a special talent. And Alana Haim, of the sister rock group, Haim. First, she actually looks like a nice Jewish girl from LA. In fact, she looks a lot like a high school friend of mine from Encino. So her look is authentic to the character. And her acting, while clearly not polished, is definitely indie film good. And I think it’s the fact she’s not traditionally an actress that makes her feel familiar and real. I’m sure there’s also the fact that Hoffman is an old-looking 15 and she’s a young-looking 25, so we’re less creeped out by the romantic overtones between the two.

So, what do we have here? We have what feels like a film that is really just a loosely held together script with some stories that PTA gathered from disparate sources that he found amusing. He hired a couple new-to-the-scene young actors that were a huge boon to the so-so material. And then sprinkled in some other, famous faces that could anchor some scenes to add a little spice and hopefully lift up an otherwise saggy pace and non-existent narrative. But I guess this is kind of how his movies go. People just wandering from place to place with weird time jumps, inexplicable situations and lots of yada-yada details. This was Boogie Nights for the most part. But that was a much stronger movie, with way more iconic characters. This one seemed to linger on the dull parts and rush the more important ones. It was just too all over the place to be enjoyable. Though I am excited for both Hoffman and Haim’s next projects. He may not have made a great movie, but hopefully he’s spawned the careers of two future stars.