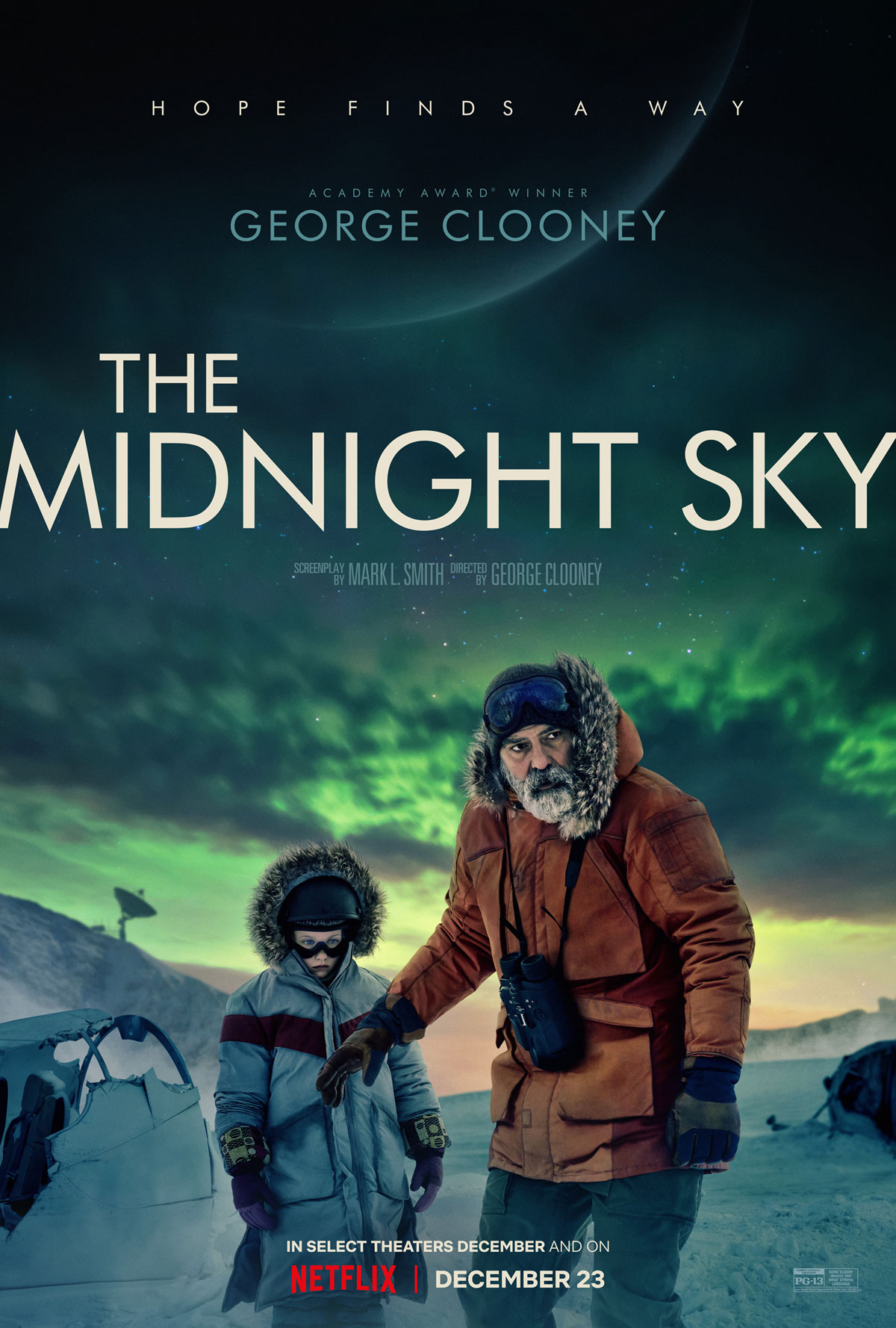 Another in a long lone of bleak post-apocalyptic films, The Midnight Sky feels like a rumination on regret in a snowy closet. So, if that doesn’t sound like a good time, you pretty much have it right. Directed by and starring George Clooney, we get to watch a decrepit version of that same man give himself blood transfusions, eat cereal and try to communicate with a mute little girl in an isolated research facility in the arctic. While a weird-looking spaceship with apparently only a few people on board heads back from space unaware the world has frozen over. Or whatever vague fate has befallen our planet. Fun!

Also, George Clooney’s character’s name is Augustine Lofthouse. Why the bizarro moniker? Don’t know. That’s only one of many unexplained details in this film. Like what exactly is wrong with Mr. Lofthouse that he needs dialysis? What the heck happened to the globe? Why are there only a handful of people on a spaceship that went all the way to Jupiter? Is it a coincidence that the only person left alive on the plan is the one who sent said astronauts on their mission to find sustainable life in the universe? How is said decrepit man able to walk through the arctic alone and survive with just a portable dialysis machine? And, why, in the name of Jesus do we have to watch yet another spacewalk where some sort of asteroid/debris field comes along and breaks shit off of the ship and threatens the life of the walkers?  I feel like I’ve seen that scene 22 times in the past couple of years and, frankly, I’m tired of it.

The whole endeavor feels like a bit of a mashup of other sci-fi movies, honestly. Oddly, the one it seems to borrow from the most is Clooney’s own film, Gravity. Thematically, narrative-wise and the aforementioned spacewalk scene in particular. And the “twist,” of course. Even the tone and pacing feels similar, from what I recall about that film. And that pacing is slow. Like slow, slow. Which is sometimes fine, but this slowness felt intentional in a way that was meant to challenge the audience. Or to pay homage to those incredibly slow-ass sci-fi movies from the 60s and 70s like 2001: A Space Odyssey. Or — **shudder** — the original Star Trek movie.

That all said, I get what Clooney is going for. He’s trying to tell a really conventional story here. A man who put his work ahead of his relationships. Who sacrificed “life” in pursuit of scientific advancement. And then make some sort of allegory out of it as an apocalypse and couch it in sci-fi. And we’ve seen this story a million times. But usually it’s a character study where we can focus on the man instead of the man’s situation. They are usually slow, cerebral things. Here, they try to split the baby (a term I really hate). They want this character study, but they also want to tell a tale of a dying world and some sci-fi thrills. But by trying to do both, they create neither a compelling character study, nor a particularly compelling sci-fi story. Because the details are missing. They only have two hours and that’s just not enough time to fill in all the missing pieces that would have made this a complete tale.

Lastly, how is it exactly that two people can repopulate a planet? I get the whole Adam and Eve thing, but I’m talking like genetically and realistically.  I mean, I suppose they could slowly… If the genetic anomalies of incest don’t end up dooming their offspring. Or the taboos of their children and their children’s children having, uh, relations with their siblings and cousins and whatnot. Obviously that’s not something that comes up in the movie, but, as I said, details…