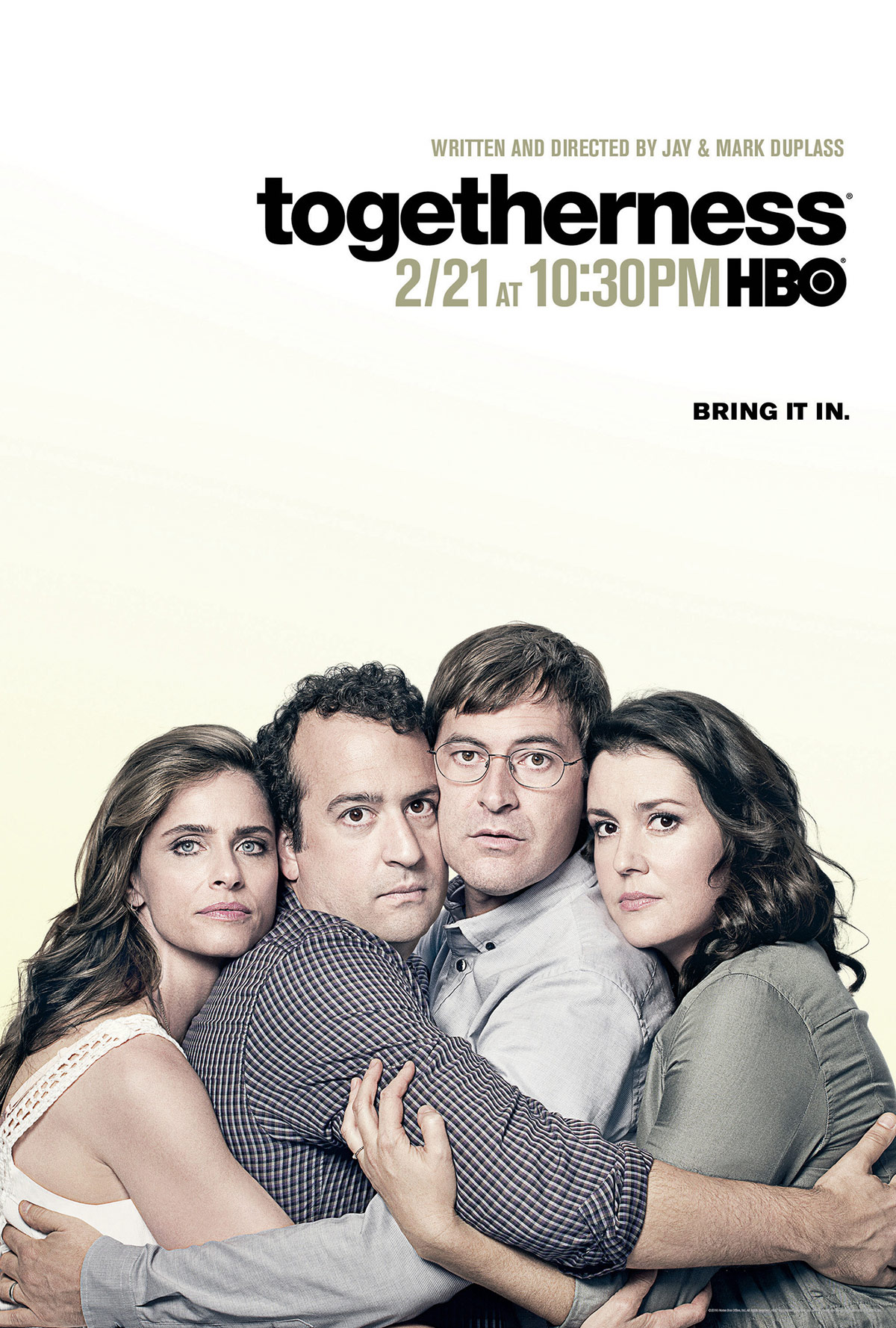 Togetherness sounds like some hippie cult or self-help book, but it’s actually an HBO dramedy by the Duplass brothers that uses the word almost as a slur or a sarcastic cudgel. Because being together can be both an amazingly satisfying experience and a suffocating nightmare. I mean, do those folks in the poster look comfortable to you? The show itself is a mixture of all of this — pretty typical white-guy Duplass stuff — with a dash of comedy (though less than you’d like or deserve) and a whole lot of uncomfortable.

I vaguely remember the show Thirtysomething, but this is kind of the hipster twenty-teens version of it. Adults with adult problems that involve all the things that adults realistically deal with, but kind of squashed into a compact timeframe. Struggles with self-esteem and job dissatisfaction and infidelity and unrequited love and children stuff. But all in a hip Los Angeles neighborhood filled with a bunch of white people that have to deal with Hollywood woes and stupid charter schools.

The core couple here is Brett (Mark Duplass) and Michelle (Melanie Lynskey). Duplass plays his usual super-awkward nerd, constantly pushing up his glasses and occasionally shedding his pants to show us his prototypical dad-ass and having all of his sexual, intellectual and career hang-ups on full display. Every time he came on screen (which was most of the time), I had to almost watch through my fingers. His performance is seriously cringe-worthy. He gives good dumb face. Lynskey is a really good actress, but is just such a sad sack the entire series that you almost don’t want to see her on screen. She just brings what is already a pretty down show even further down. She’s not funny. The show isn’t funny. Buy I’m not really sure it’s supposed to be. Or is it?

But, if there is one ray of light in all this melodrama, it’s Amanda Peet. She plays Tina, Michelle’s sister. And she’s kind of a mess. The same way Lynskey excels at playing sad, Peet excels at playing crazy. The woman is a free spirit, but like a narcissistic free spirit with an occasional drinking problem and a self image that’s clearly taken some hits as she’s moved into middle age. She, more than anyone else on the show, makes it worth watching. She’s both difficult and fun to watch and her performance, unlike her character, is pretty ego-less. Granted from season one to season two, they retool her character a little bit, making her much more of an adult than in season one, but she’s still the glue that holds a pretty shaky show together.

So am I surprised that HBO canceled this show after two seasons? Does HBO actually cancel things? I guess the answer to both questions is yes. I can’t imagine the production budget on this was very high and the cast isn’t exactly packed with a-listers, so perhaps they, like myself, saw that the narrative had nowhere to go. And, honestly, after two seasons I was pretty sick of these people. I’m not one to harp on the white-people problems thing, but there just seemed to be a lot of whining going on, and a lot of stuff that was really inconsequential and, in some cases, asinine. Do I really care about Brett and Alex’s (Steve Zissis) production of marionette Dune? And Melanie’s pursuit of a charter school for the kids they apparently have, but are shown less than Snuffleupagus? I didn’t and really couldn’t see myself going forward. Sometimes things are meant to be. Sometimes they’re not. I liked it until I didn’t and then it went away. That’s fine; there’s plenty of good television out there.