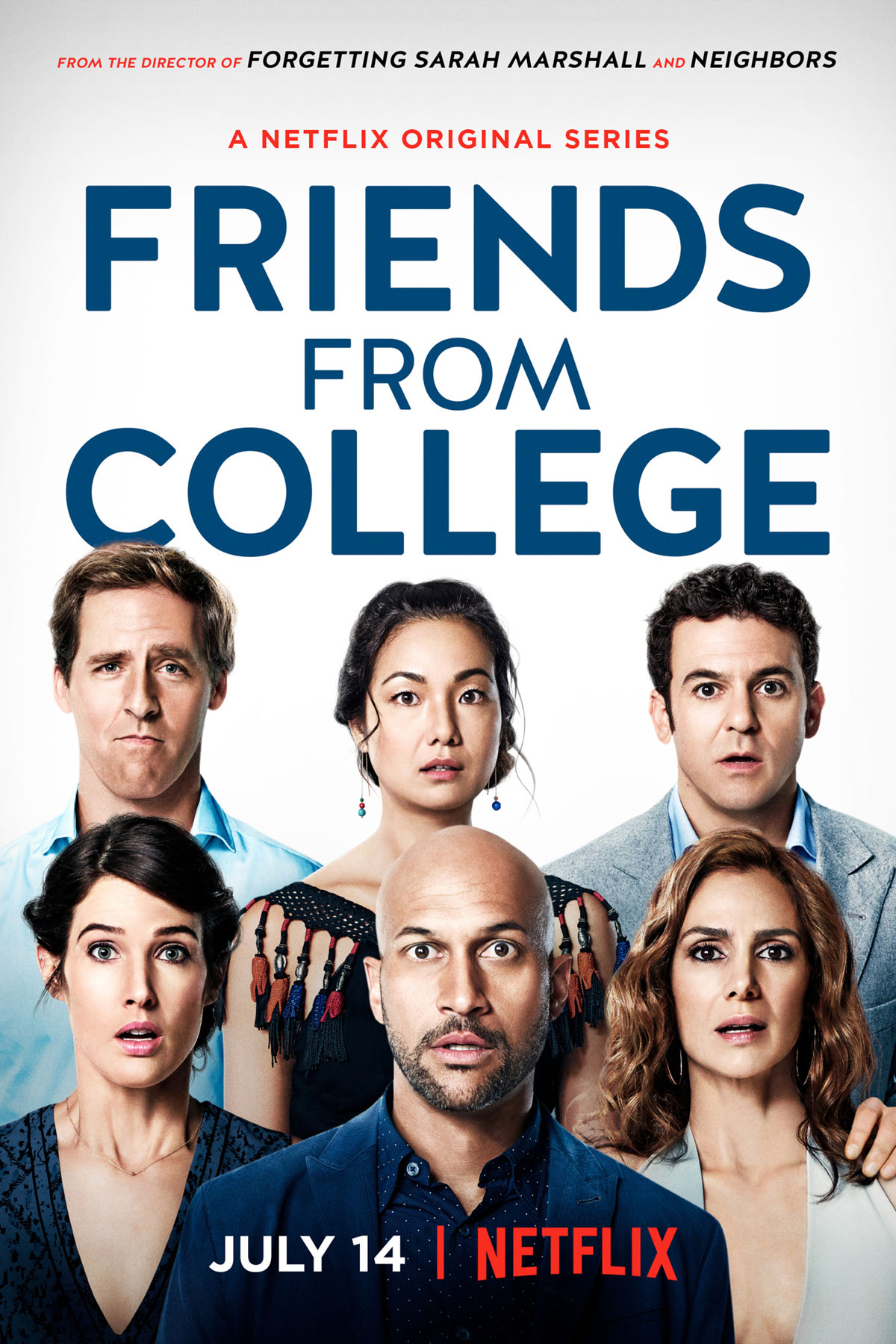 The title says it all. This is a show about a group of friends from college. There’s the core group and then the creators can presumably spend this first season (and subsequent seasons, should they be so lucky) layering on peripheral friend after peripheral friend. It’s comedy gold, right? Well, it’s also a shaky base for a series that relies way too heavily on what a couple of the series’ actors bring to the party.

The actor at the center of this is Keegan-Michael Key. He’s really the glue that holds this thing together. He’s front-and-center in the poster and is essentially asked to carry a show that draws most of its characters in pretty broad strokes. He’s asked to do voices and physical comedy and emotional stuff. And they actually care to give him a semi-coherent backstory. The rest of the ensemble cast kind of floats in his orbit, mostly servicing his character’s neuroses, hang-ups and constant failings both professionally and personally. He’s a writer, after all. And what do writers love writing about most? You got it. And he’s a “serious” writer. The type who wins writing awards based on his little-read “serious” books. The tortured artist who, while serious in his work, is a messy, goofball in his real life. And we get to essentially watch as he gyrates and spins and essentially affects this friend group that have been stuck in what turns out to be a badly co-dependent relationship for twenty years.

Now, the assumption here is that this group of friends is supposed to be relatable to its viewing audience. An audience who — based on the characters’ age and the soundtrack that includes everything from Pavement, Modest Mouse and Built to Spill to Counting Crows and The Notorious B.I.G., is supposed to be on the young end of the Gen-X spectrum (somewhere in the 40-45 range) — might benefit from a relatable college from which these friends graduated. But, no, we’re given a group of friends who graduated from Harvard. And, yes, I know series creators Francesca Delbanco and Nicholas Stoller are literally friends from that particular university, but there’s a difference between writing what you know and writing for an audience, like me, who is always asking — as we watch these people do dumber and dumber things — “these people got into Harvard?” The specificity of their exclusive schooling was distracting in a way that making them from, say, Penn State wouldn’t have been. Unless the whole point of the program is that, hey, privileged Ivy Leaguers can be just as fucked up as the rest of you bottom-feeders from the ACC or Big East. I mean, couldn’t they have, perhaps, have gone to Syracuse University like our buddies Nick, Winston and Schmidt from New Girl? Yeah, that sounds about right (and familiar).

So, if you start with the premise that you can throw a group of talented, funny folks into some funny situations, mix in some history between the friends and have what amounts to an enjoyable show, you’d be about half way there. Additionally you have to make them relatable (per above) and in some way likable. They nail the first part. There is some funny shit — mostly driven by Key — but the emotional connection we’re asked to extend to what amounts to a despicable group of people really kills what could have otherwise been a decent experiment in nostalgic sit-comery. I mean, there is very little in terms of redeemable qualities of these people. There is a scene that kind of sums up the entirety of the series and where it both succeeds and where it fails. It takes place in Fred Savage and Billy Eichner’s pristine NYC apartment in which the principle characters all of a sudden acquire a taste for snorting ritalin and coke and decide throwing pizza against the white walls and ceiling would be a good idea. All the while Eichner’s character begs them to keep it down because he has surgery in the morning. The worst, adolescent frat garbage that may happen at nineteen in a disgusting fraternity house, but not in a multi-million-dollar Manhattan apartment amongst a group of forty year olds. Especially Harvard grads! I mean, it was funny in the moment because we get to watch Savage tap dance and Key do some great physical comedy, but we’re ultimately left wondering why the hell we’d want to spend any more time with these assholes. In fact Eichner’s character (the partner of Savage’s character) in his droll, anal-retentive (and really funny) way voices our annoyance and steadfast belief that this group of people become horrible human beings when they’re together and even questions out loud why the hell they’re friends to begin with. And, as an audience, we kind of wonder the same thing.